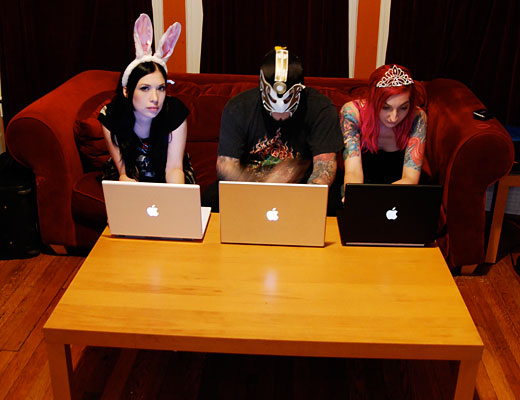 I spent most of my week in New York holed up in the Virgo Boarding House with Gala Darling and our gracious tattooed host. In the midst of distractions including prosthetic limbs, books about serial killers, a variety of skulls and antique wheelchairs, we managed to get a surprising amount of work done. 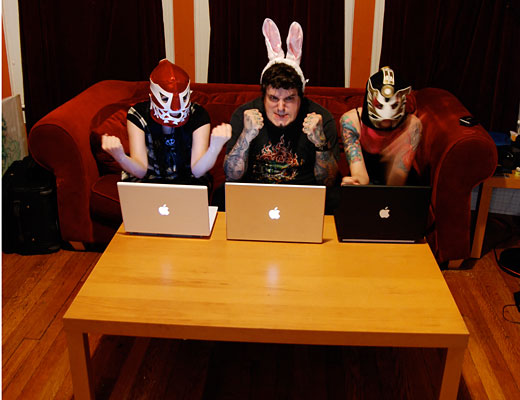 Our nightly routine consisted of sitting on the velvet couch together, each of us working on our laptops with a movie running in the background. It was a definite bonding experience and we had many funny moments (like on Thursday at midnight when our host convinced us that the face of Jay Leno was imprinted into a tree down the street). I also chased after an ice cream truck and sat around listening to obscene amounts of George Michael with Gala. At one point, we schemed about clubbing intruders with the prosthetic leg of an obese man that resided near the couch. It was literally a solid week of nonstop twisted fun that I am very grateful for!

Last Saturday was spent in Central Park with friends from around the country (and world) for the Virgo Birthday Extravaganza and it was everything I could have hoped for. Presents, cupcakes, lady bloggers, rings and balloons only added to the magic! 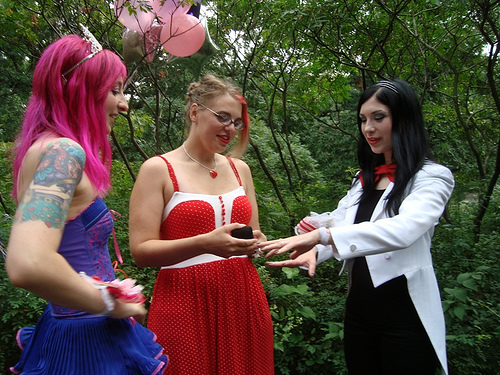 The Virgo birthday night stay at the Hotel on Rivington was a hit, partly because of this view of the city from our floor-to-ceiling windows (and this shower didn’t hurt, either): 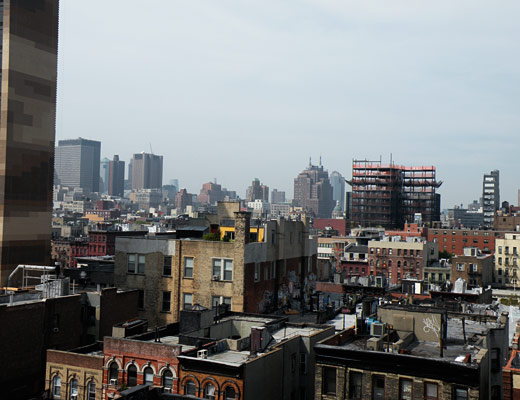 Monday day (my actual birthday) was spent recovering from the previous day’s extravaganza. Gala and I hauled our hefty birthday cake back onto the subway and after tons of traveling across the city, it was miraculously still intact!

Bianca and Eliza took me out to Death & Co. for fancy drinks on Sunday night. The bare black walls and chandeliers were totally in line with my aesthetics! We also slipped in some photo booth fun: 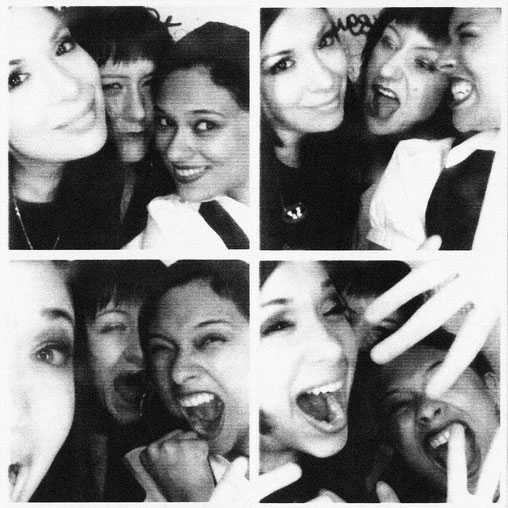 We finished off the evening at my favorite club night, Sway surrounded by three Colombian guys who looked like models and claimed at different points to be twins and brothers but we were having too much of a good time to question them! Later in the night, I made friends with a painter who used to live in Portland and we had a quick birthday dance and listened to Journey on my iPod. It’s nice to find little reminders of home where you’re so far away.

On Wednesday, Bianca did a photo shoot of Gala and I in the East Village streets. Creepy men kept stepping in to see what we were up to and offer their assistance. Finally, it was time say goodbye to Bianca and move onto the Meatpacking District: 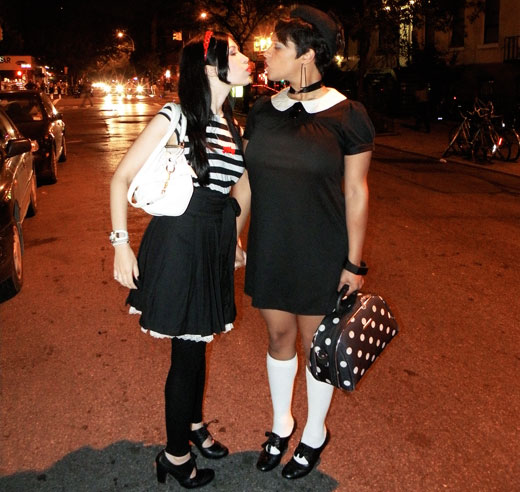 As we exited the hotel, camera crew suddenly surrounded us. The commentator asked us a bizarre series of questions and I think we held up pretty well under the pressure! It was a very odd, drawn-out experience that finally pushed us to flash our matching rings to get this hunky greaseball to back off: 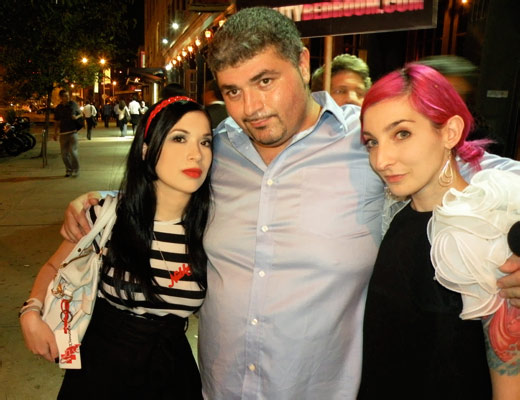 Because the Virgo Boarding House was located in Brooklyn, it required a bit of a jaunt to get into the city. Completely unfazed by our lengthy treks, we made fantastic use of the subway time. Discussions included topics ranging from what hair-covered people are called (an elderly woman seated nearby looked me in the eye and sharply responded “WOLF MAN,”) to Michael Jackson’s whimsical pajama choices (lobsters, anyone)? 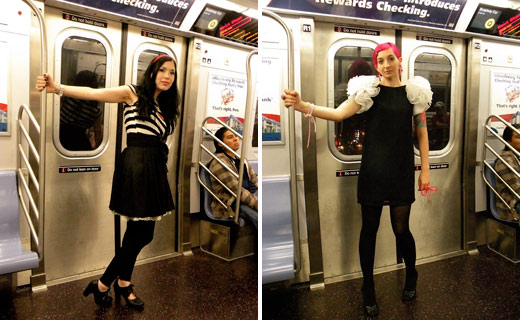 New York really turned on the charm this week. And now, I’m sitting in a Vegas hotel room warming up for the Blogworld Expo in the morning! I can’t believe how much has happened in a week! Life is beyond good! 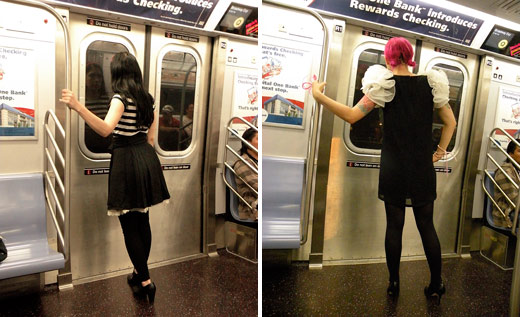 P.S. An extra special thank you to Loulou for the stunning birthday present and to Gilda for inviting Gala and I along to explore the city’s finest department stores! 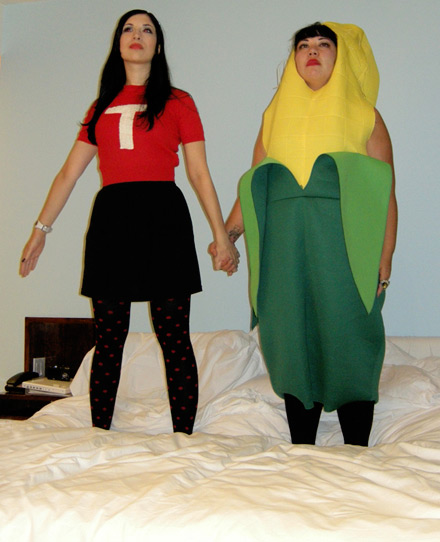 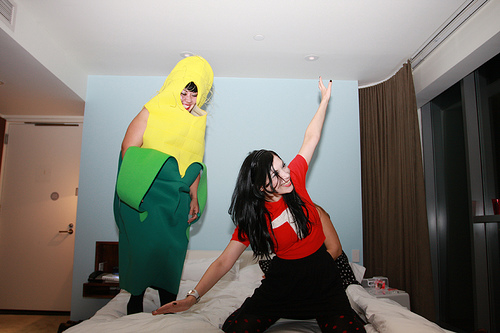 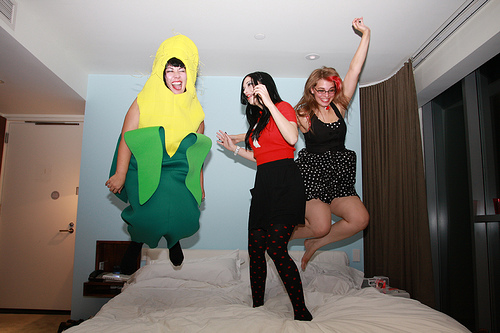 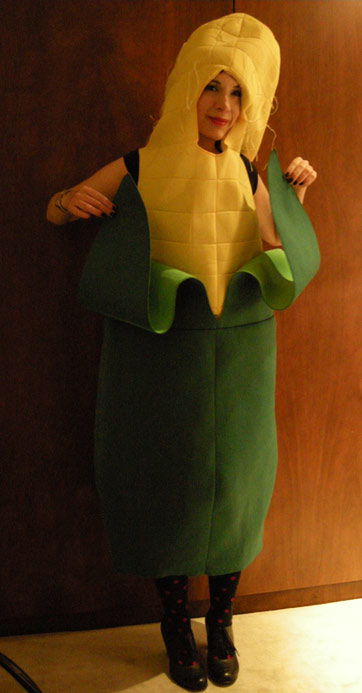 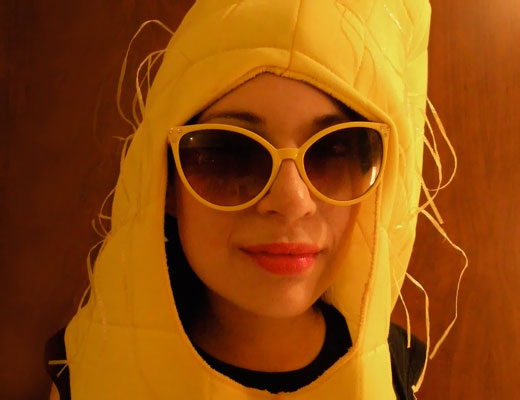 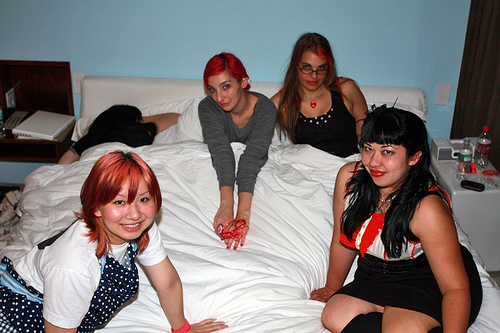 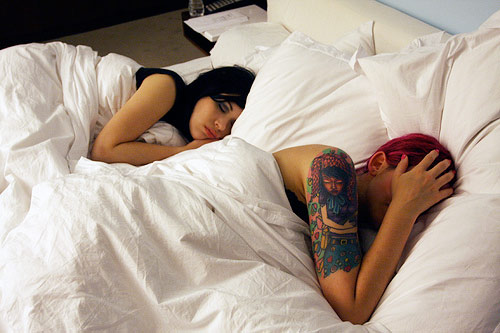 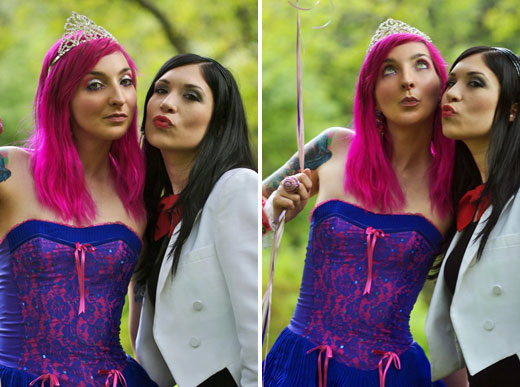 Gala Darling and I did our joint birthday celebration / union in Central Park’s Strawberry Fields on Saturday afternoon and it was absolutely magical! I flew to New York overnight without any time to adjust (or sleep) beforehand so it felt very surreal as I ran around the city doing pre-party errands with Star, Marie and Lola in tow, attempting to pick out pink balloons, track down four dozen cupcakes and lug around one very heavy triple-layer birthday cake! 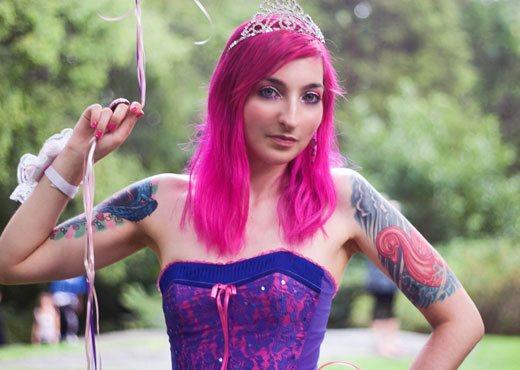 Gala was getting her makeup done at MAC, so we didn’t see her until we arrived at Central Park. She literally looked like Barbie on acid! The Betsey Johnson dress and shoes she’d chosen coupled with her glittery makeup, pink hair and tattoos made her easy to spot, even from across the park! 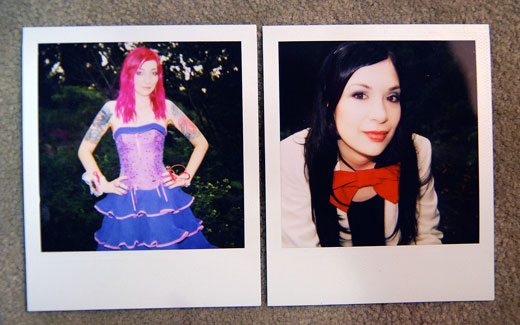 In stark contrast to Gala’s glittery color masterpiece, I dressed very graphic and minimal, channeling Steve Perry in my white tailcoat. I was glad I dressed comfortably because it was really humid! 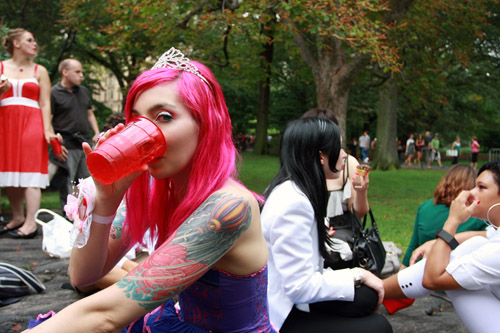 The grass around Strawberry Fields was damp, so we all moved to a massive rock formation instead. 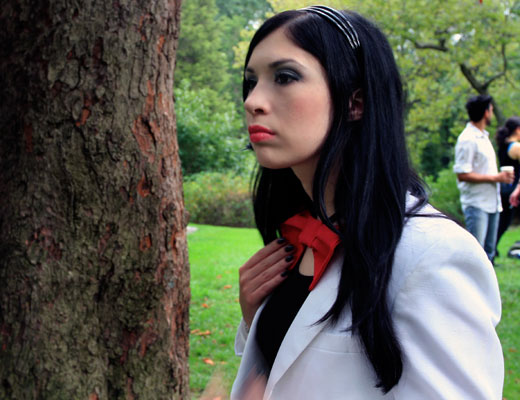 The crowd was awesome; many people we’d never met before gave us gifts including rings (thanks, Poochie!), roses, a bottle of champagne, fake nails, the coolest tights EVER from Doe, books and even corsages that were handmade by Marie (mine featured Michael Jackson, Gala’s had Biggie). As you can see, we were totally elated: 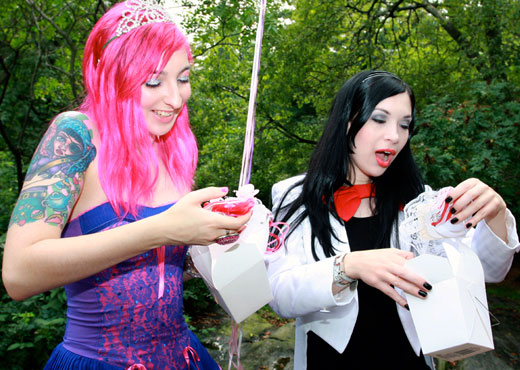 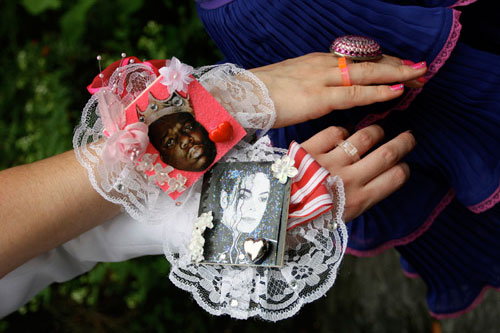 Star hopped over and did a faux wedding ceremony on the fly! She made a fantastic priestess! 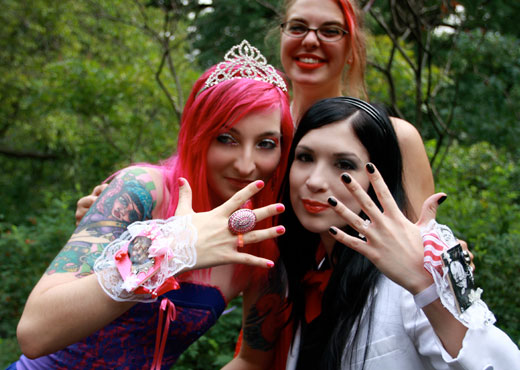 For most of the two plus hours, we sat around chatting and eating cupcakes while Bianca mounted her flash in a tree and took portraits off all of our party goers! It was fascinating realizing that the people at our party originated from all over (Australia, North Carolina, Singapore, California). And, of course having the rest of the lady bloggers in tow made it that much better. 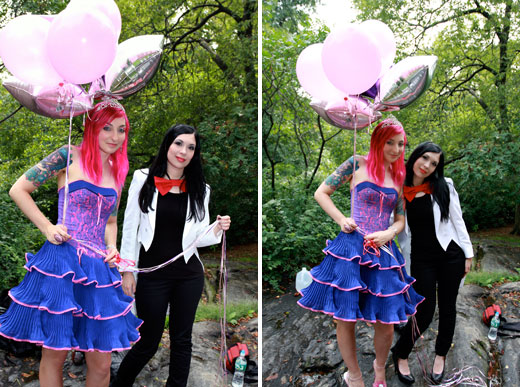 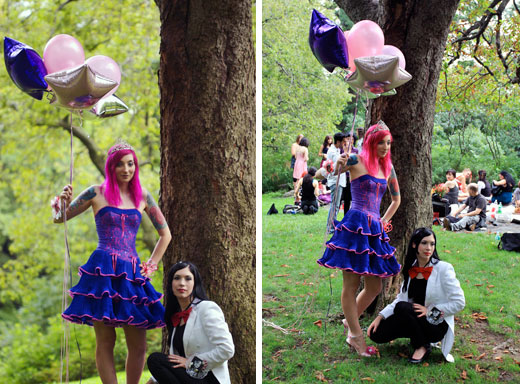 Photos of the happy Virgos by Bianca Alexis

The party was pretty tiring (it was about 80 degrees out), so Gala and I dragged our cake and presents onto the subway, all the way back to our amazing room at the Hotel On Rivington. I’ll be updating about our post-party antics very shortly. Stay tuned!

Thank you to everyone who came out to Central Park and helped us eat the gazillion cupcakes! Your generosity, gifts and company made the day hugely enjoyable. I hope to see you again next year!

Being a Virgo, my birthday is rapidly approaching. This year, I will be turning 27 (official date: September 14th)!!! I have an upstanding tradition of celebrating my birthday with friends in New York City every year, but this one in particular is going to be extra super special! Why, you ask?!

Gala Darling is also a Virgo (our birthdays are only one day apart) and we will be throwing a joint party at a daytime shindig in Central Park, complete with cupcakes! 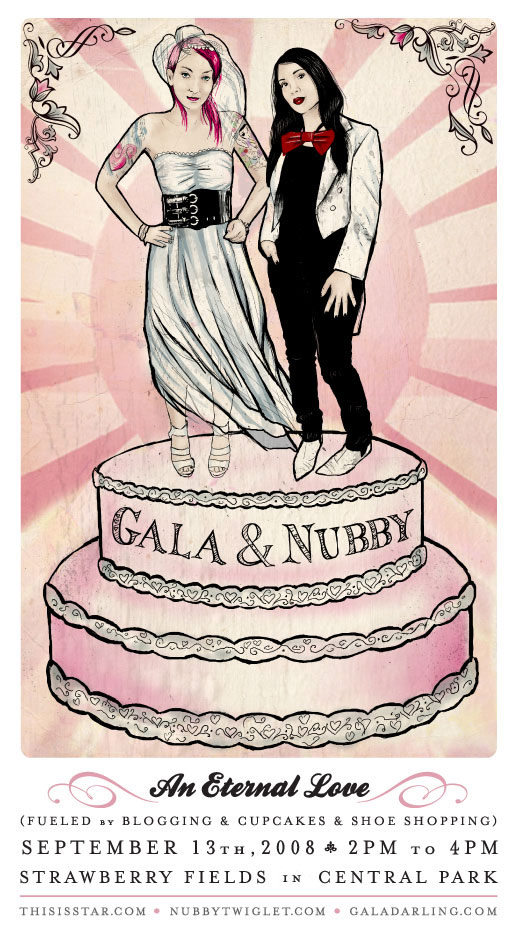 When I met up with Gala in New York back in July, we joked about being ‘Virgo soul mates.’ Naturally, when I told our mutual friend Star about it, she had the brilliant idea to draw our birthday invite as a wedding invitation! Haha, I love it!!!

Meet up with Gala, me, Bianca, Star, Marie, Gilda and some other friends from 2 p.m. to 4 p.m. (or so) on September 13th in Strawberry Fields. This party should be magical! Also, does anyone want to ride the carousel with me?!

This year for my birthday, I’d much prefer to receive a few things that I really, really love over piles of stuff. A nice pair of (out of season) Chloés, a cute Twelve by Twelve sweater and a YSL coin purse would more than do the trick! Hee. 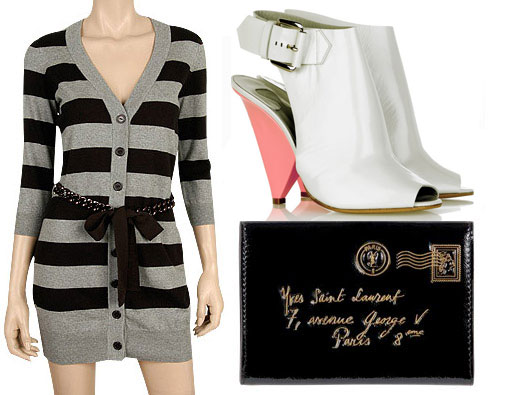 I’m not expecting anything, but if you’re really keen on sending me a card or gift, drop me an email at nubby @ nubbytwiglet.com!

I hope to finally meet some of you face to face this Saturday!