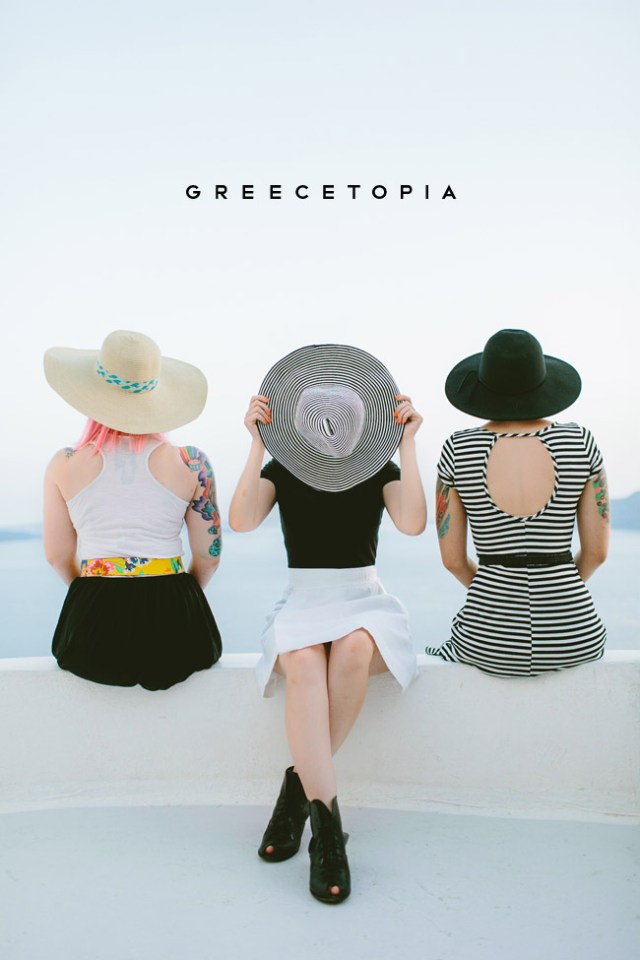 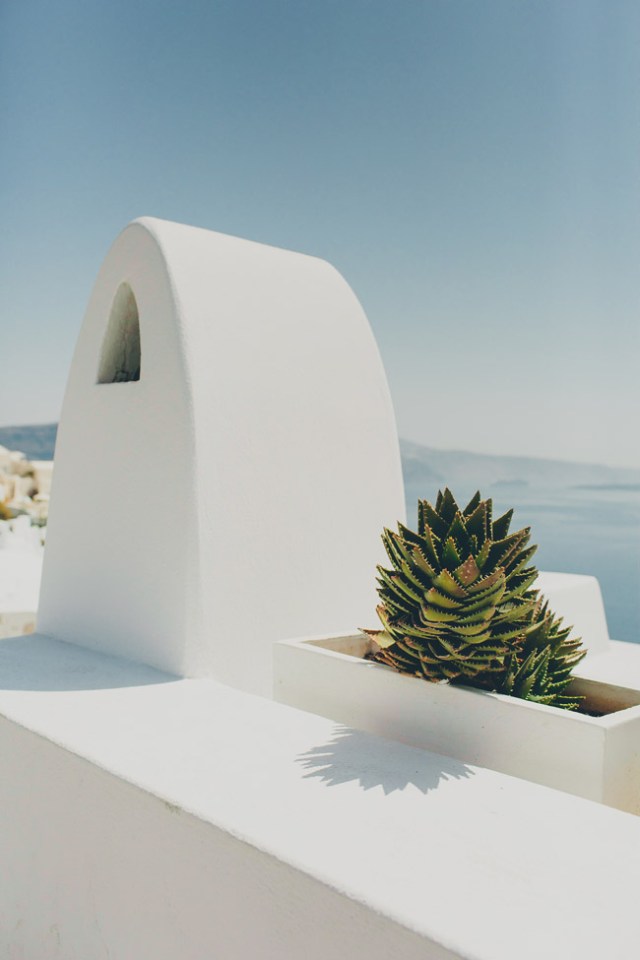 • Since both Santorini and Mykonos rely heavily on tourism, everyone we interacted with at restaurants, on boats and in taxis spoke at least basic English. We had no trouble at all getting directions, ordering or booking tickets.

• Both islands are on the Euro. If you do need cash, there are ATMs but they’re few and far between. At one point, I had to use one from Alpha Bank that was mostly in Greek. That was fun!

• All the shops and restaurants we visited, no matter how small, accepted credit cards.

• You can’t drink tap water on either island! When you sit down at a restaurant, they automatically bring you bottled water. And grocery stores everywhere sell it for dirt cheap.

• Wifi can be very spotty. Most restaurants do advertise free wifi on their outside menus but still, it was pretty hit or miss at half of the places we dined at. Depending on how you look at it, this can either be a blessing or a curse! Our villa in Santorini had a super weak signal and we quickly realized that we could only upload images on Instagram at around 5 am. Every morning, I would roll out of bed in the darkness, walk out to our front steps, hold my phone to the heavens and hope for the best! On the flip side, our luxury hotel in Mykonos had blazing fast internet.

• The one thing you’re not told until you arrive is that you can’t flush toilet paper. At all. If you’re staying in a luxury hotel, that’s one story but at villas and regular places, don’t even try. As you can imagine, the pipes snaking through the islands are quite old and this leaves you with only one option. There’s a garbage can next to most toilets and after you wipe, you drop it in. Yep. Honestly, it takes some time to get used to but it’s just part of the deal. As a side note, our handsome villa host in Santorini, Nicholas came by nearly every day to collect our…trash. He was so gracious about it that it wasn’t even a big deal! 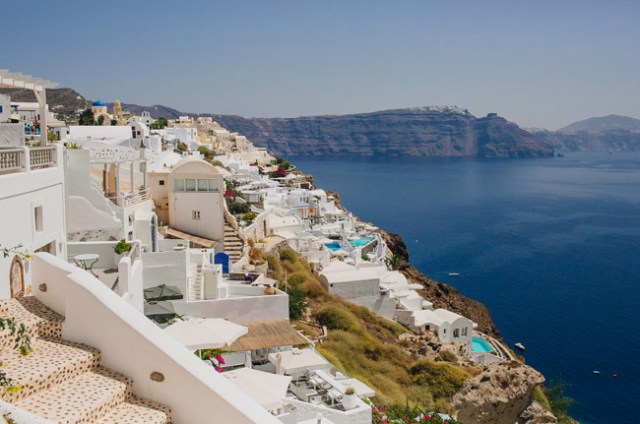 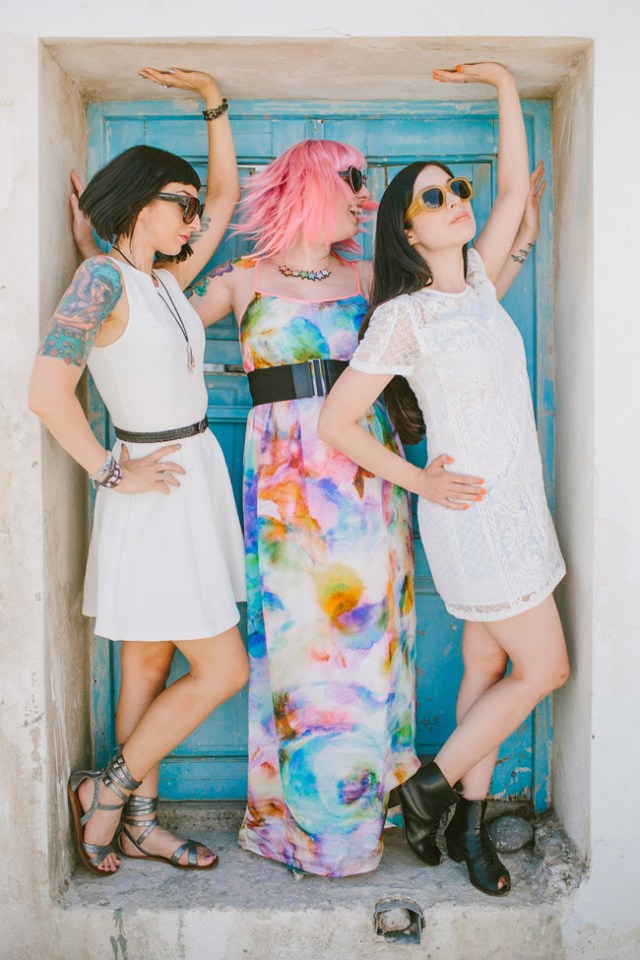 • A wide-brimmed hat is a must, especially if you’re taking a boat tour. Pack one that easily rolls up.

• Sunglasses are a must as well, though if you forget yours, there are plenty of shops on both islands that sell them. Expect to pay a premium, though!

• Roll up an extra tote bag in your suitcase in case packing woes strike! When we went to catch our Easyjet flight back to London, Kat’s luggage was over the weight limit but we were able to save on outrageous overage fees by loading one up with her extra belongings.

• Bring more than one swimsuit. There are plenty of opportunities to swim, from hotel pools to the Aegean Sea (many of the boat tours let you hop off and swim). Nobody wants to slither into a wet swimsuit so keep two on rotation.

• Flat sandals or shoes are necessary. Absolutely DO NOT pack heels, unless you’re spending the entire time prancing around a luxury hotel or clubbing. There are hundreds of uneven stone steps everywhere and a lot of them curve along the side of steep mountains. I brought some low-heeled leather lace-up sandals with ankle support that I ended up wearing nearly every day. Remember, the islands are full of tourists and there’s nobody to impress!

• Stick with lightly colored cotton or linen layers. The heat during the day can be unrelenting. I packed mostly sundresses, wrap skirts and plain t-shirts and tanks. Both islands are extremely casual. 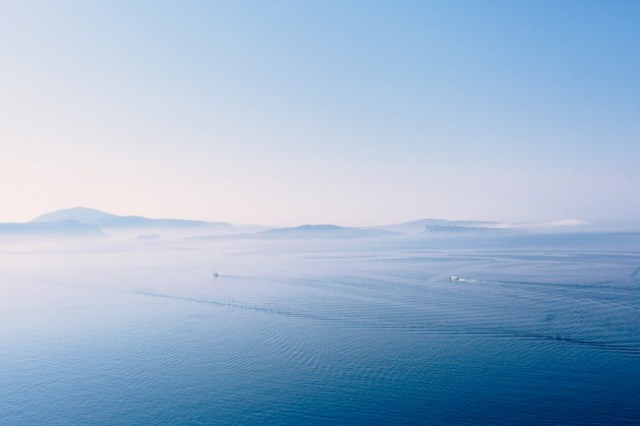 • Since we were flying from London to Santorini, Easyjet was the best choice. Flights are cheap and direct. The whole process was completely painless. Just make sure you have your boarding passes printed in advance and follow the strict weight guidelines for packing, otherwise you’ll get gouged!

• We had a taxi arranged for us by our Air bnb hosts (most will set up any cars and tickets you may need) but if you google “santorini taxi” there are quite a few companies that can hook you up.

• The roads throughout both Santorini and Mykonos are windy, steep, ridiculously narrow and more than a little scary. Tourists on scooters and 4-wheelers will cut you off. People stroll into the street. Yet, our drivers expertly zoomed around them with barely a second glance! Amazing.

• To travel between Santorini and Mykonos, we used a boat company called Sea Jets. It’s about 3 hours by boat between the two islands and the most affordable way to island hop. 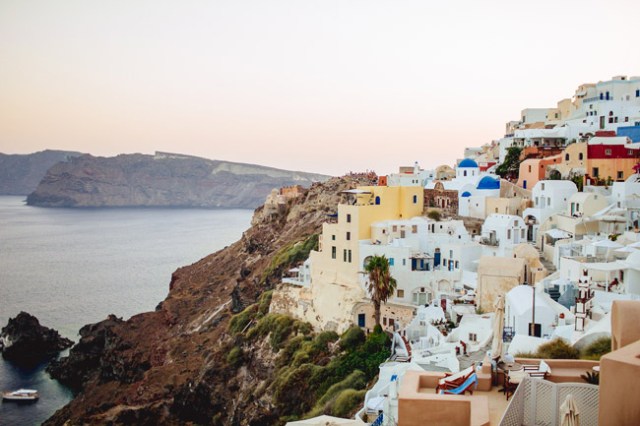 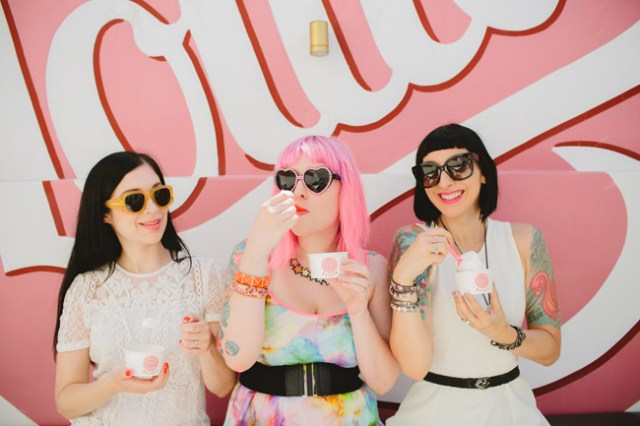 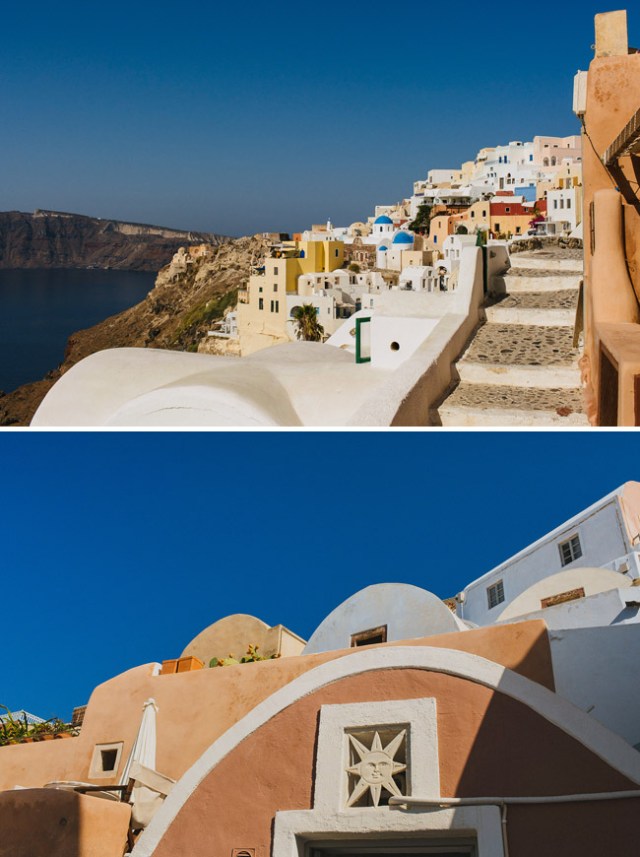 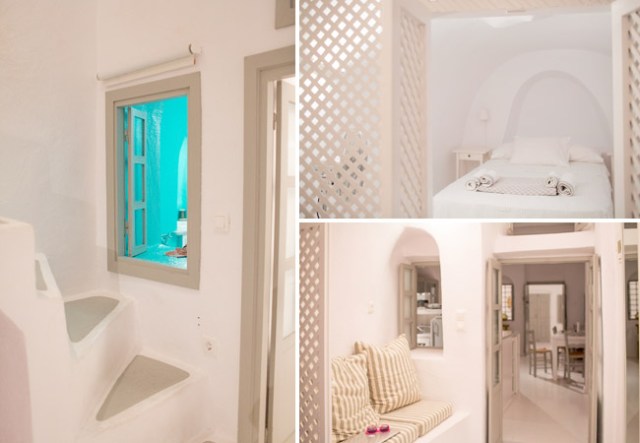 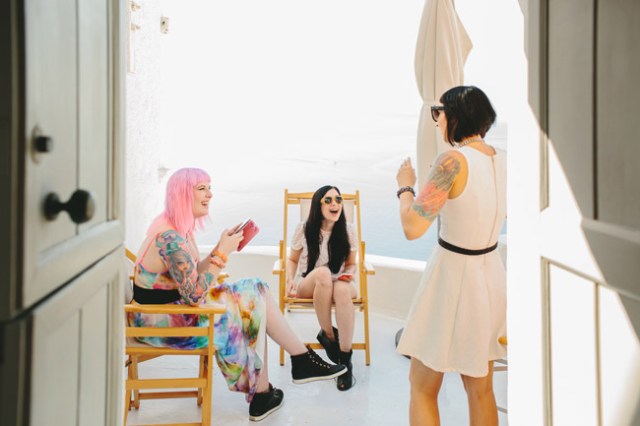 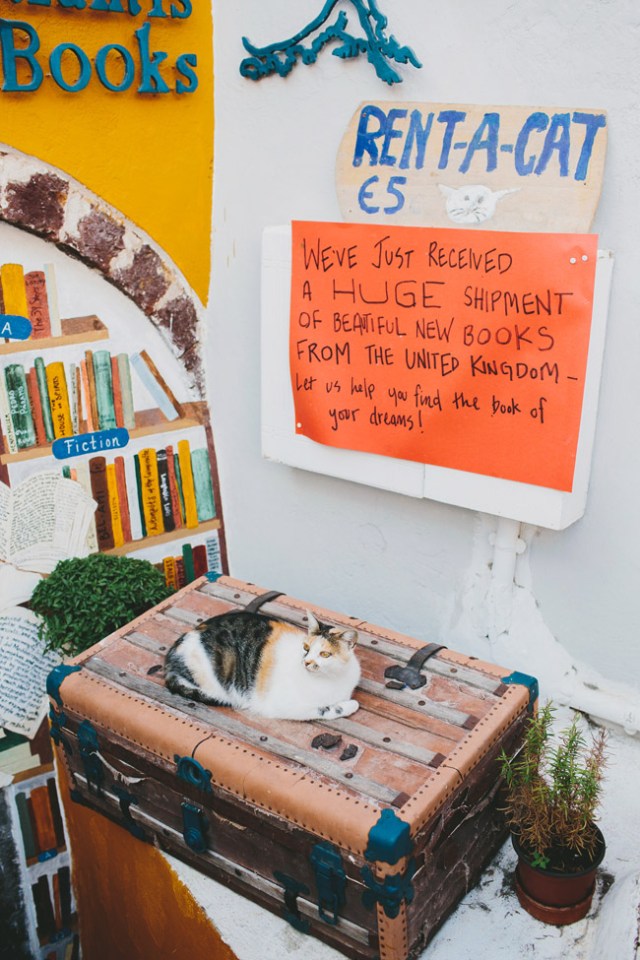 • One of our favorite shops ended up being an independent bookstore in Santorini called Atlantis Books…which rented cats as well!

• Both islands are full of maze-like paths of shops. After awhile, it feels like each shop sells similar things but it’s still super fun to explore since they seem to go on forever. We bought piles of questionable items including a beach towel emblazoned with a donkey and a bottle of Greek Superiority. 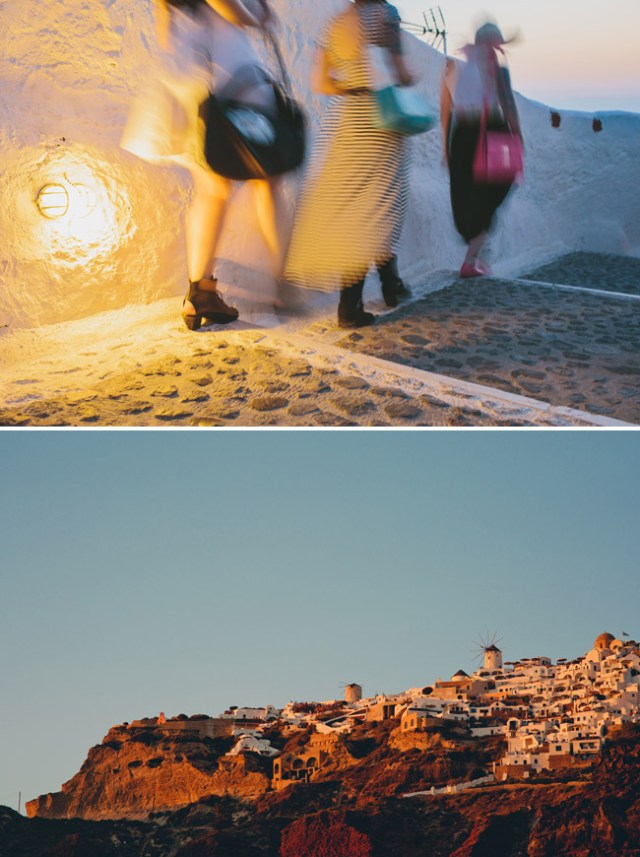 • If you’re staying on Santorini, the sunsets in Oia are legendary. 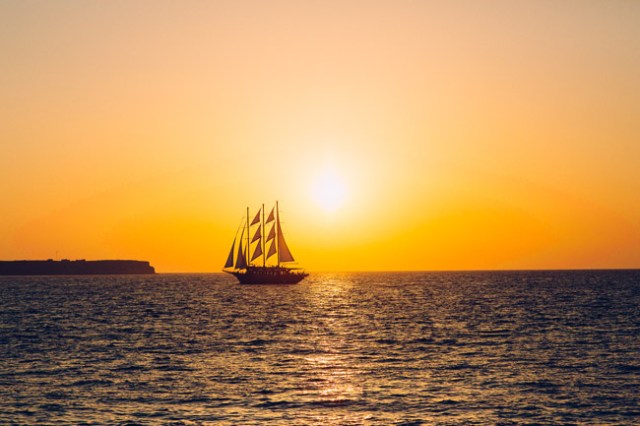 • The most fun we had during our entire time in Santorini was taking a five hour sailboat tour around the island that concluded with watching the sunset. There are dozens of companies that offer a variety of options including fancy dinners on catamarans but we kept things simple and did a 25 euro trip. Since we were staying in Oia, it was a bit of a trek to the boat which was docked on the other side of the island at the Old Port in Fira but a travel agent (there’s a row of them in the center of town) can direct you on what to do and where to go. 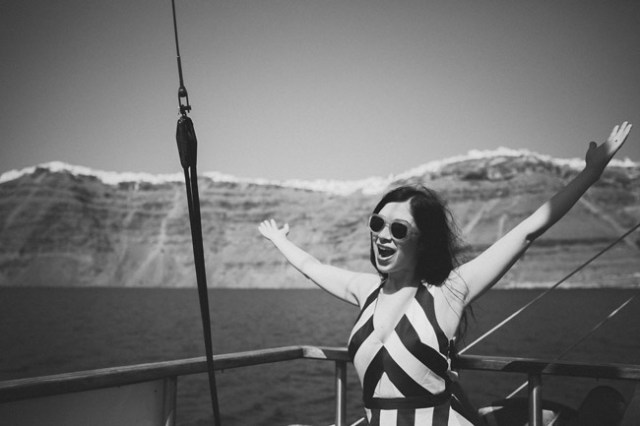 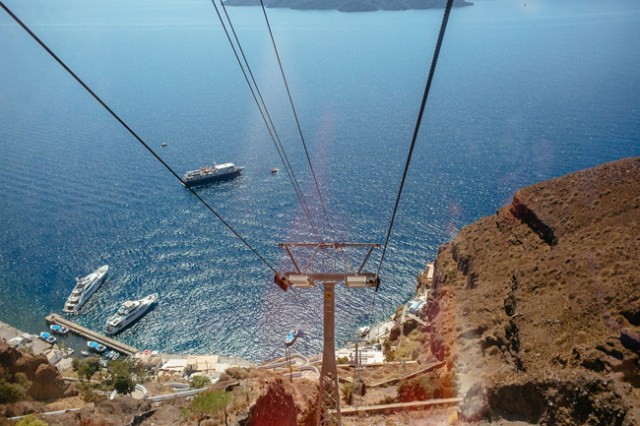 • To get to Old Port for your boat tour, a very, very steep cable car ride down the side of the mountain takes place. Well, you can actually choose between the cable car…or a donkey ride!

• In Mykonos, there are many beachside clubs and it’s known as the place to party in the Greek Islands. Honestly though, we had a great time spending our nights relaxing poolside at the Grace Mykonos bar so I can’t give any firsthand advice in that department! 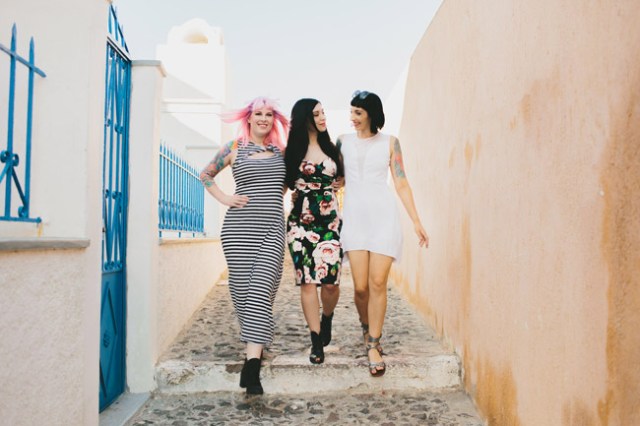 • For most of our island days, we were just happy weaving through the streets, peeking into stores and snapping hundreds of photos. Both islands are so beautiful that there’s a photo opp around every corner. 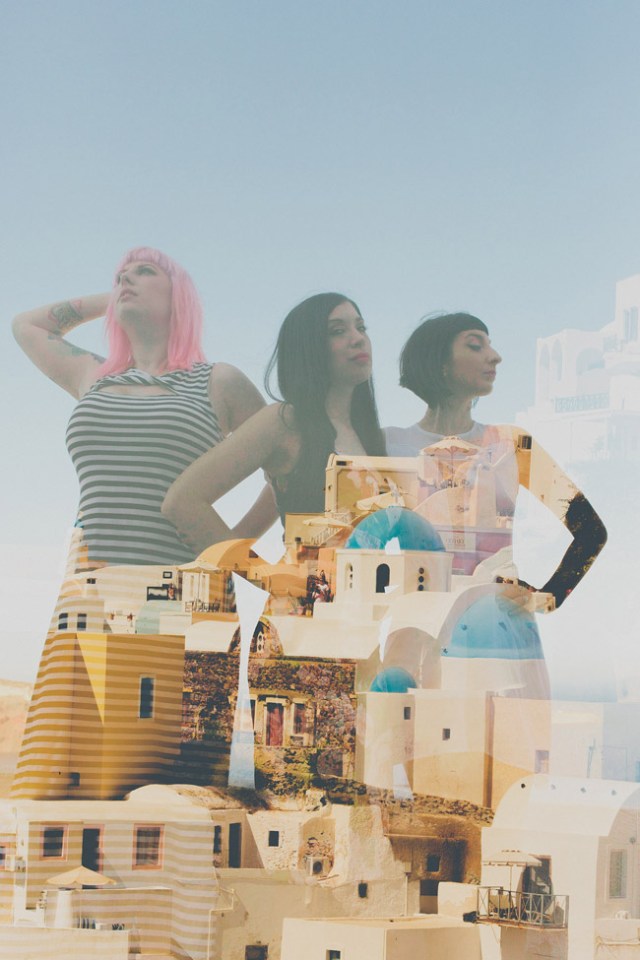