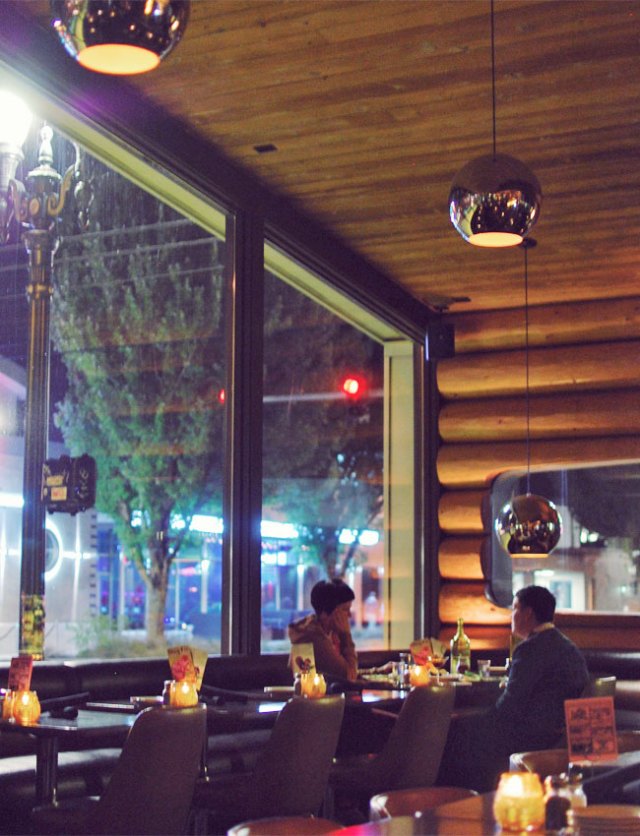 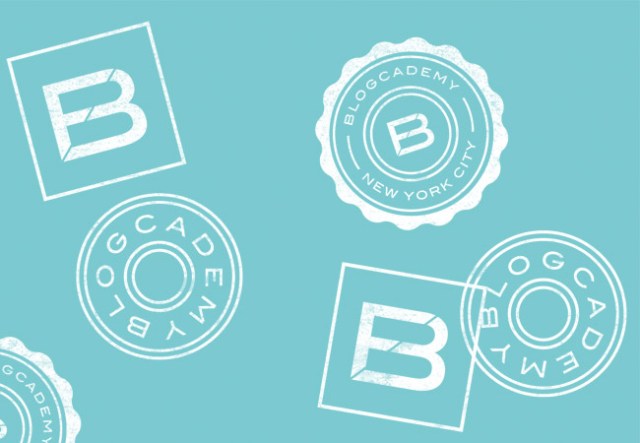 It’s been one of those weeks — you know, the ones where you barely leave the house?! Even as recently as a year ago, I used to completely dread weeks like this but after doing so much traveling (Austin, Cannon Beach, Santorini, Mykonos, London and New York in the last month and a half alone), I actually look forward to waking up and having to be absolutely nowhere.

While I’ve been home, there hasn’t actually been any downtime though. I spent the week revamping my digital portfolio and clocking in at close to 25 projects, there was a lot to get through. Though I’ve shared a majority of the projects before and it all worked perfectly fine, I’ve always felt that “good enough just isn’t good enough.” I wanted everything to be larger in scale, to show more uses and to have a more consistent, polished feel. And, though it took 4 straight 12 hour days to get through, it feels so good to be done! I’ll share the results next week. 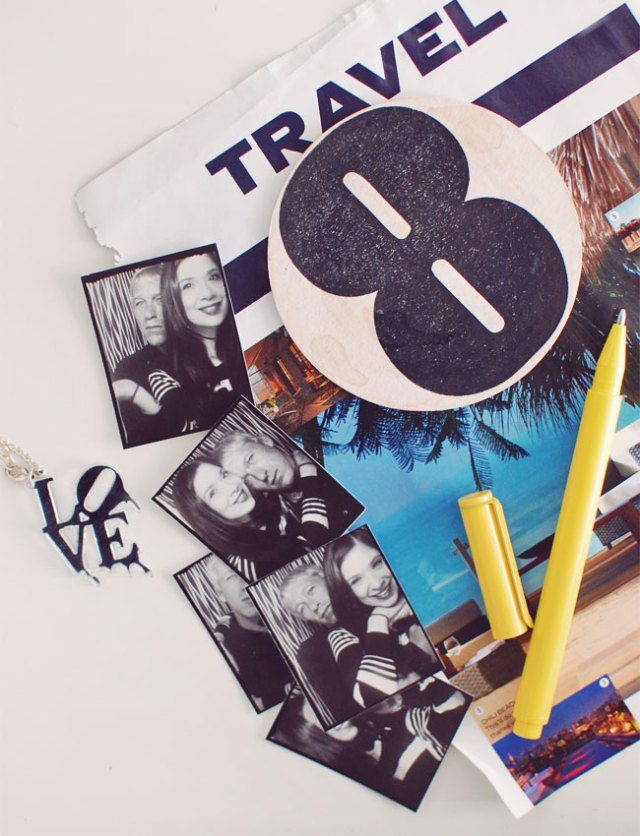 September is a good month around here — my birthday was the 14th, Joey’s is the 24th and sandwiched in between was our anniversary on the 17th. We like to knock everything out at once! Of course, no anniversary is complete without a few silly photobooth rounds after a few celebratory drinks. Cheers to three years! 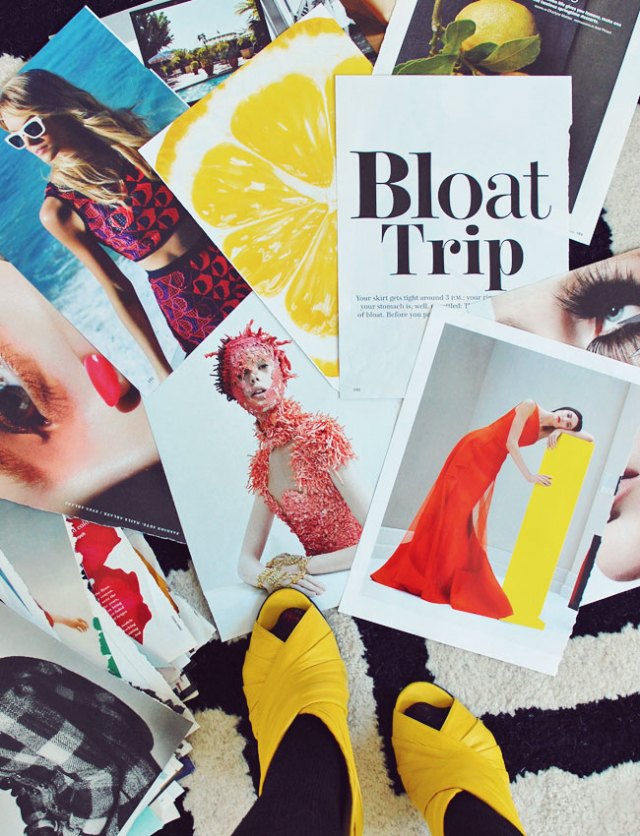 On Monday, the travel starts up again. I head off to LA for some client meetings and in preparation, I’ve been digging through 10 years of magazine tears for an editorial project I’m going to be working on. I must have 500 pages saved in my flat files and having those physical references is so valuable. For as long as I live, I will continue investing in books and magazines! 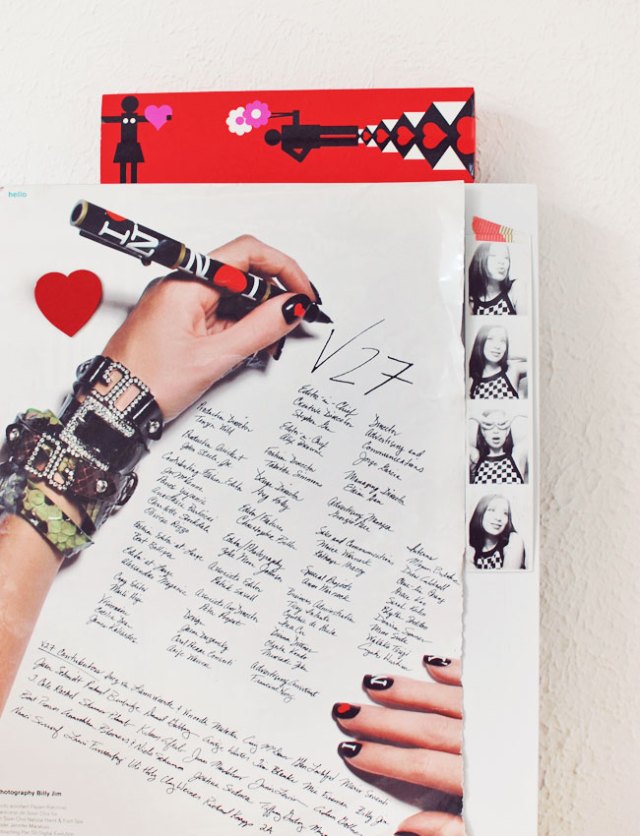 And with that, I’m signing off to conquer a big to-do list before my LA trip. Have an amazing weekend, everyone. I’ll be back next week to share the inside scoop of what I’ve been working on business-wise behind the scenes. xo 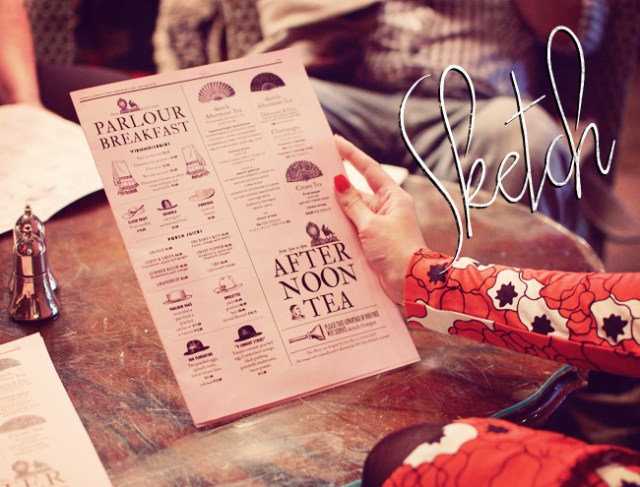 During my stay in London, the coolest restaurant I visited by far was Sketch. Over the decade it’s been in existence, Sketch has won dozens of awards and been written up in most major magazines. While the food and drinks are wonderful, part of its charm can be attributed to the over the top decor. Basically, if you’re a foodie obsessed with art, this is your mecca.

I’d built the Sketch experience up in my head after reading dozens of reviews and thankfully, it lived up to the hype. When we entered, we were greeted by a beautiful hostess with a shaved head and platform boots, draped in head-to-toe black. The lobby felt more like an entrance to a glamorous night club than a restaurant. 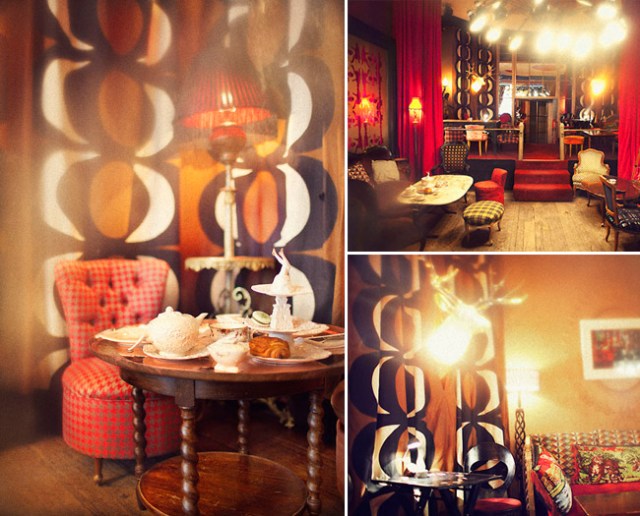 We were led to The Parlour, which was packed with Louis XV seating and featured an eccentric rainbow wall divider along with dessert cases. Everything was steeped in tradition, but with a modern, quirky twist. 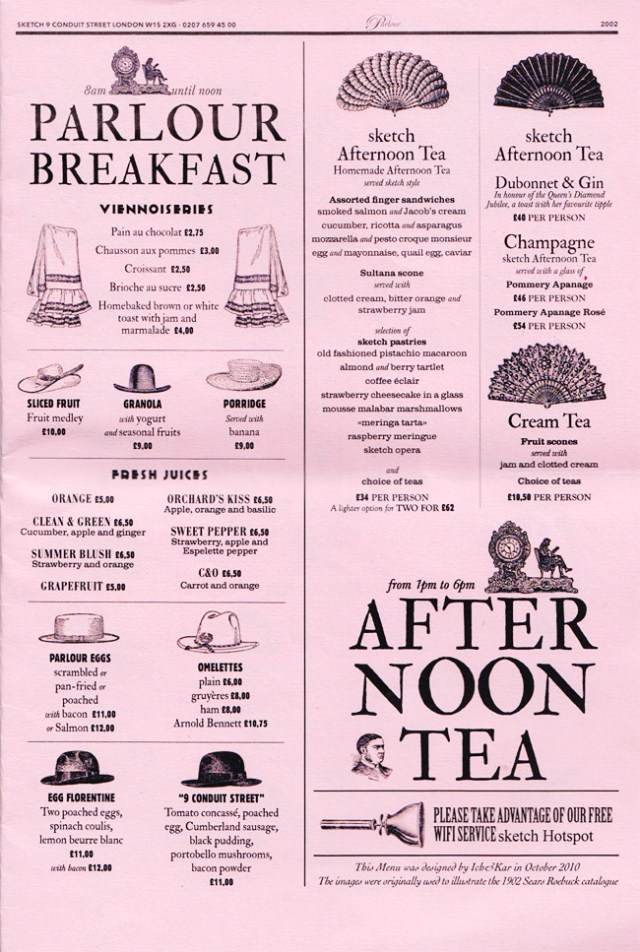 As we were seated, I glanced down at one of the most chic menus I’d ever seen, printed on bubble gum pink stock. Based on the decor alone, I assumed that the prices would be outlandish. After all, when you’e seated in the equivalent of an otherworldly art gallery, it’s to be expected.

Surprisingly, everything from the desserts to main dishes were very average when it came to London pricing. And, delicious. Everyone at our table ordered something different — Kat had fries which I kid you not, tasted like a perfect batch of golden McDonald’s fries (though I haven’t had those in years!). I chose a baguette and fresh grilled veggies (simple but perfectly executed) and Gala had the afternoon tea, which I regretted not ordering after taking one bite of her scone with clotted cream. The bottom line is that the menu was so unique and varied in its offerings that you could easily dine there five days in a row and not get sick of it. 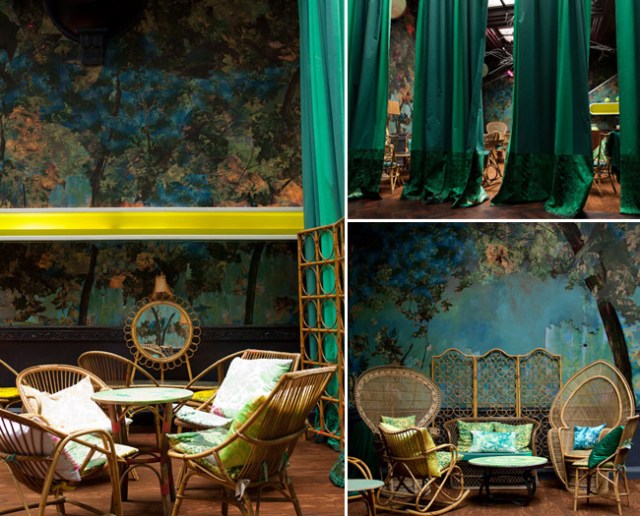 I hadn’t realized how many other separate themed rooms occupied Sketch — as I attempted to find my way to the bathroom, I passed The Glade, which Sketch accurately sums up as an “enchanted fairytale forest.” I can only imagine what a perfect setting it would be for afternoon tea. 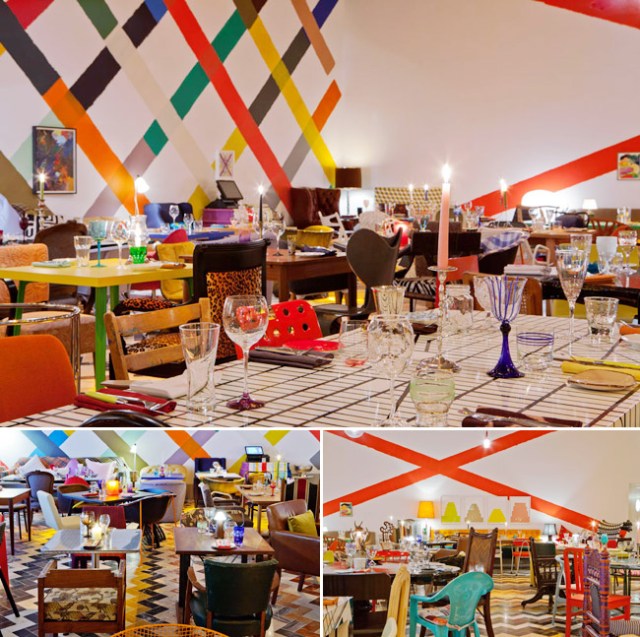 And then, we made our way through The Gallery. With walls, floors and furniture covered in boldly hued patterns, it’s the most vibrant of all the restaurants and bars. 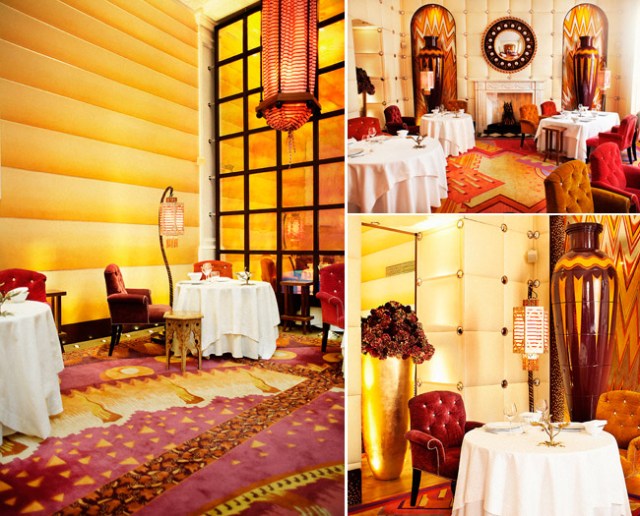 But still, the themed rooms kept going. Upstairs is home to The Lecture Room, an award winning fine dining restaurant. 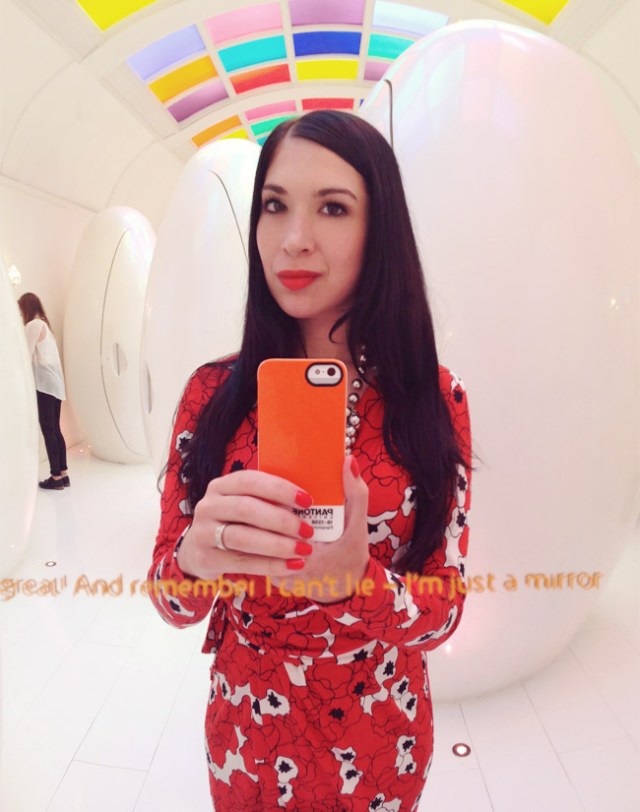 By this point, I thought I’d seen it all, but there was one more surprise; the bathrooms themselves. As I made my way up a pristine white marble staircase, I was met with dozens of egg-shaped pods. Confused, I asked were the toilets were. Everyone laughed. “Inside the pods.” Completely self-contained and scented, using them was definitely an otherworldly experience. And the weird, funhouse-style mirror placed above the sinks was the perfect way to top it all off.

Sketch was a total trip but perhaps the best part of our experience was that the staff were incredibly charming — there was no stuffiness at all. A killer venue, mind-blowing art, incredible food and stylish yet down-to-earth staff all rolled into one place? Really, what more could you want?! If you’re in London, Sketch is a must-see.

Reviewed: Sketch, 9 Conduit Street, London.
Top photo, bathroom photo and menu scan by me. All other photos, courtesy of Sketch.