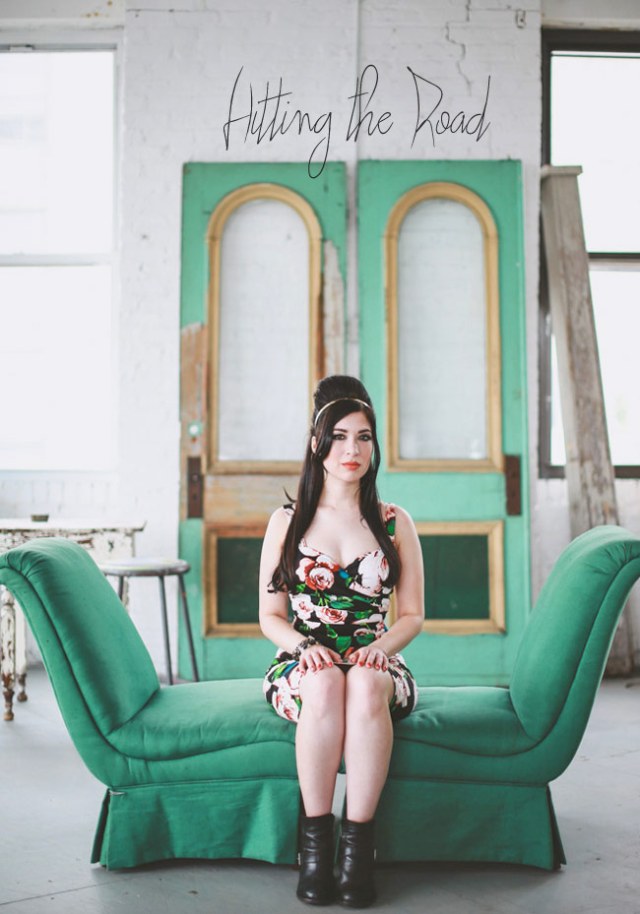 This year has been a whirlwind of ups and downs and a whole lot of big changes, some of which I’ll be sharing more about soon. One thing I do know for sure is that to to grow, it’s necessary to embrace change. For me, a lot of personal growth has happened this year by allowing myself to step away from my desk (and work) and take off to explore the world. For a creature of habit like me, it’s not always easy letting go of routines that feel set in stone but I know that it’s absolutely necessary to grow as a human being, blogger and business owner and gain some much needed perspective.

My schedule over the next two and a half weeks will look something like this:

Portland to New York.
New York to London.
London to Santorini, Greece.
Santorini to Mykonos.
Mykonos back to London to teach two Blogcademy classes.
London to New York.
And finally, New York back to Portland, just in time for my 32nd birthday.

I’m beyond excited (and let’s be honest — a little bit nervous!) to hit the road again but that also means that blogging will be a little quieter around these parts over these next few weeks. To keep up on all of the adventures in real time, please follow along on Instagram and Twitter.

And with that, I’m off to catch my flight. I’ll have much more to share from New York, London and Greece soon — lots of love! 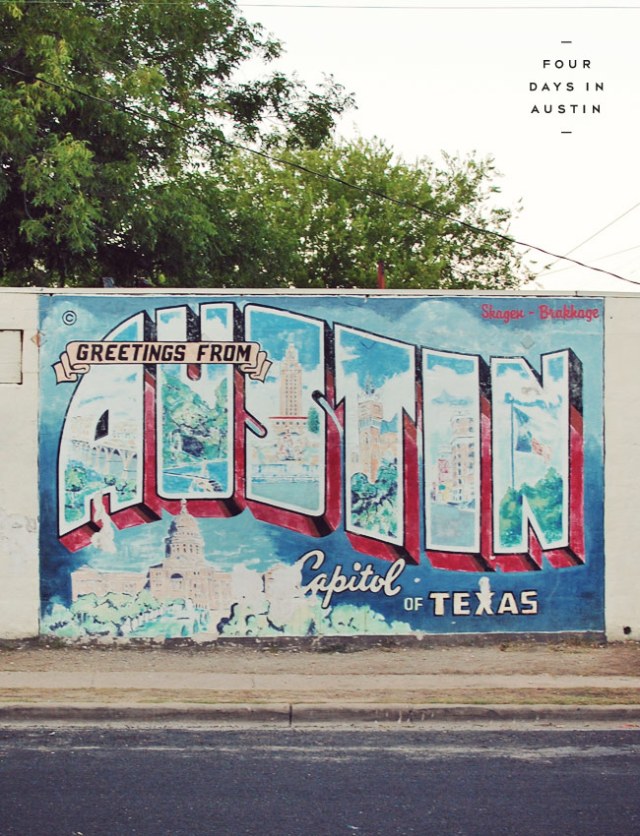 In my mind, I’d always considered Austin to be the “Portland of the South” but after spending four days there, I’ve since realized that I wasn’t giving the city enough credit; while there are a lot of striking similarities, it definitely has a distinct personality all its own. 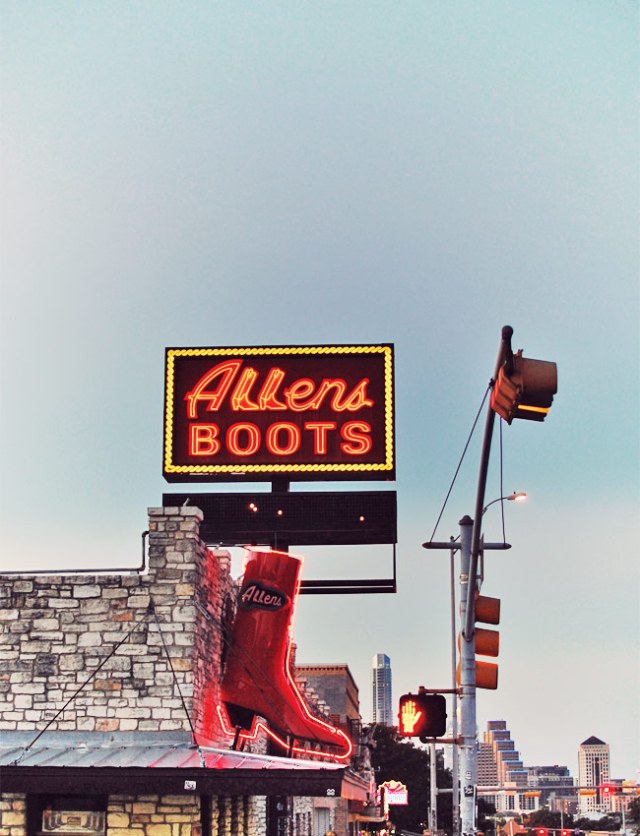 I arrived last Thursday armed with no real agenda and only a print-out of the address of my Airbnb digs. With two days off before teaching The Blogcademy, I was open to whatever came my way. And boy, was it a good time. 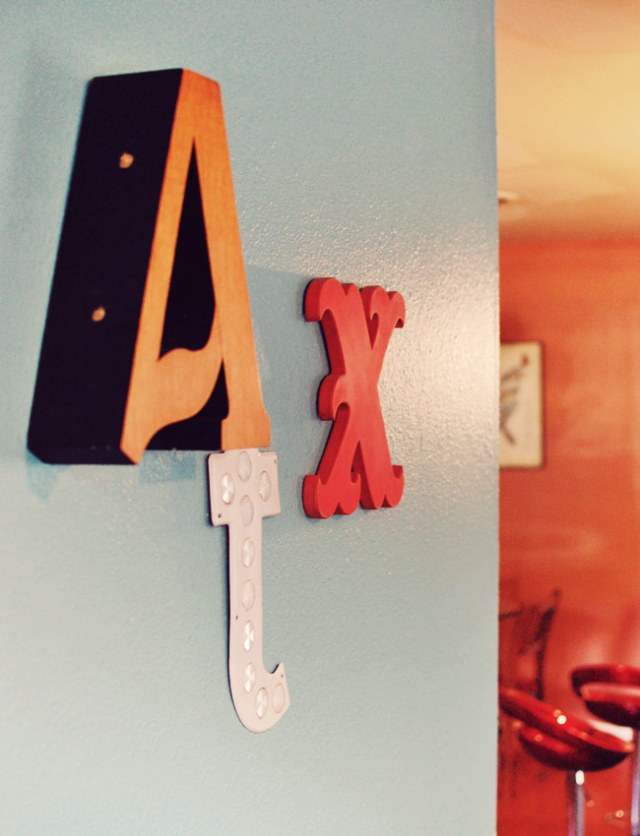 I’d been to Austin once before in 2008 but staying in a hotel along the outskirts of downtown never gave me the full experience I was hoping for — this time, Kat, Gala and I found a cozy 50s bungalow on Airbnb that was a short walk from South Congress and it was such a better time. Our house (this one, if you’re interested) was right up our alley — our living room was decorated with an eclectic mix of letters, vintage movie posters, a green plaid couch and turquoise walls. 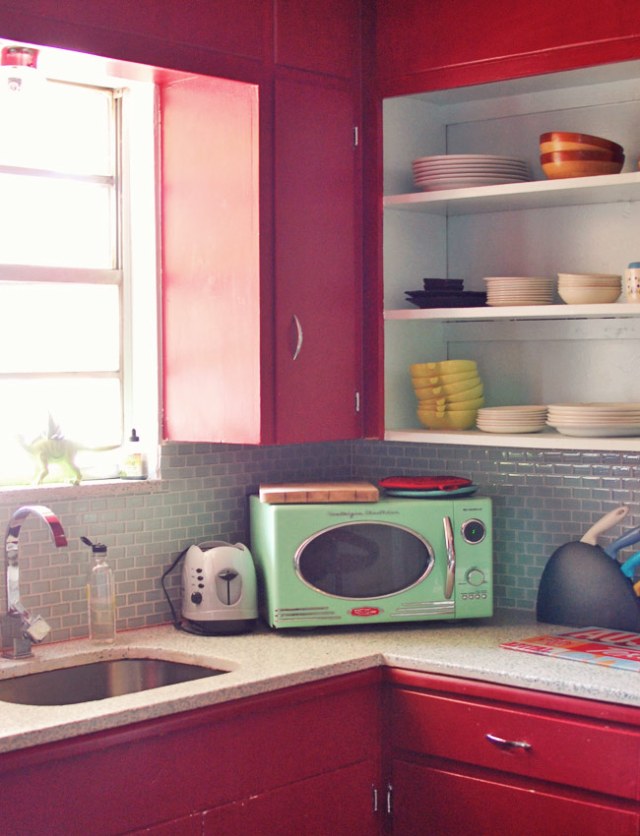 And the kitchen was just as fabulous — cherry red and accented with baby blue tile! 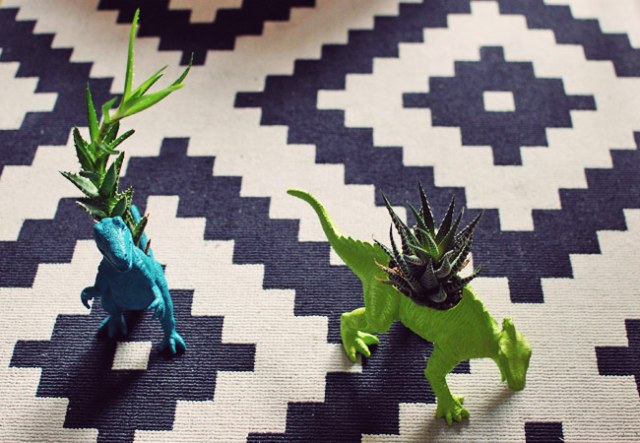 Did I mention that there were dinosaur planters, too?! They ended up popping up in a whole lot of our Instagram shots, along with that awesome rug. 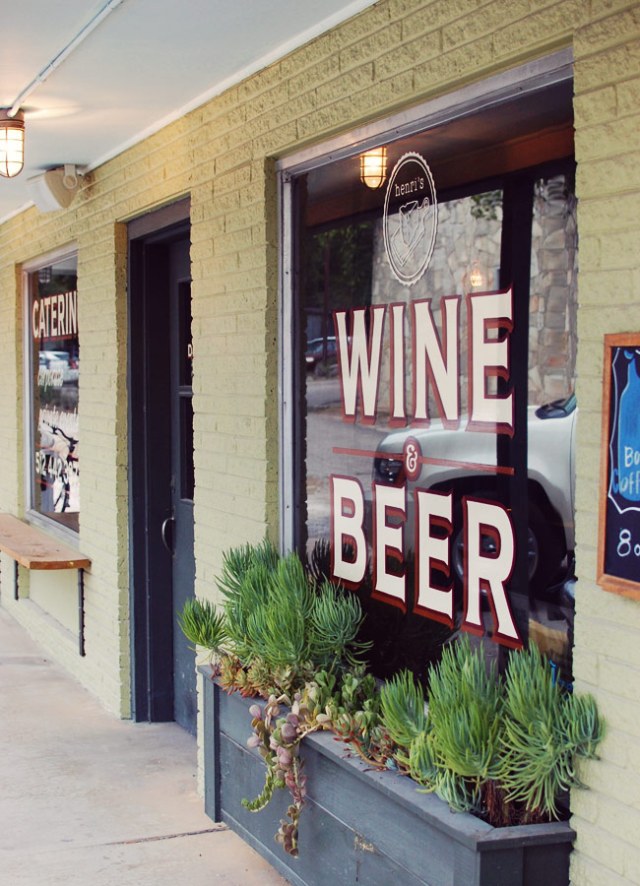 On our first night in town, our friend Ellie from the Media Bombshell whisked us away to Henri’s, a quaint little wine and cheese bar which I loved. 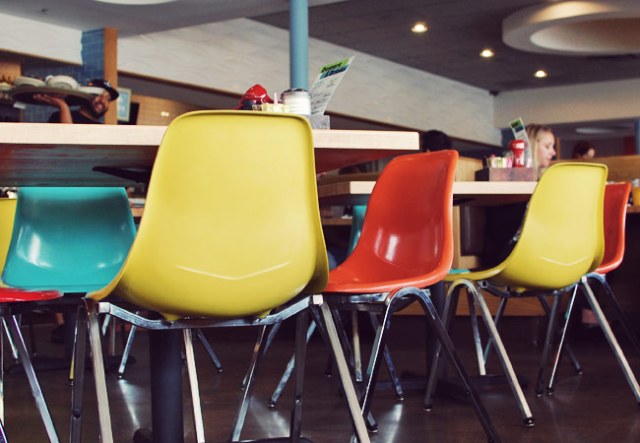 Following that, Gala’s friend Jess happened to fly into town the same day as us and as luck would have it, she spends a lot of time in Austin and gave us a restaurant and shopping tour. We definitely had some cultural experiences along the way: Kat & Gala tried queso for the first time and we paid a visit to Cabela’s (and toured their extensive museum of taxidermy). And, we got to see the inside of a Cracker Barrel (I’ve passed them dozens of times but never made my way inside). But my favorite restaurant stop was Kerbey Lane Cafe, which resembled a retro diner and had colorful seating, massive portions (just look at my coffee!) and many vegan friendly options. 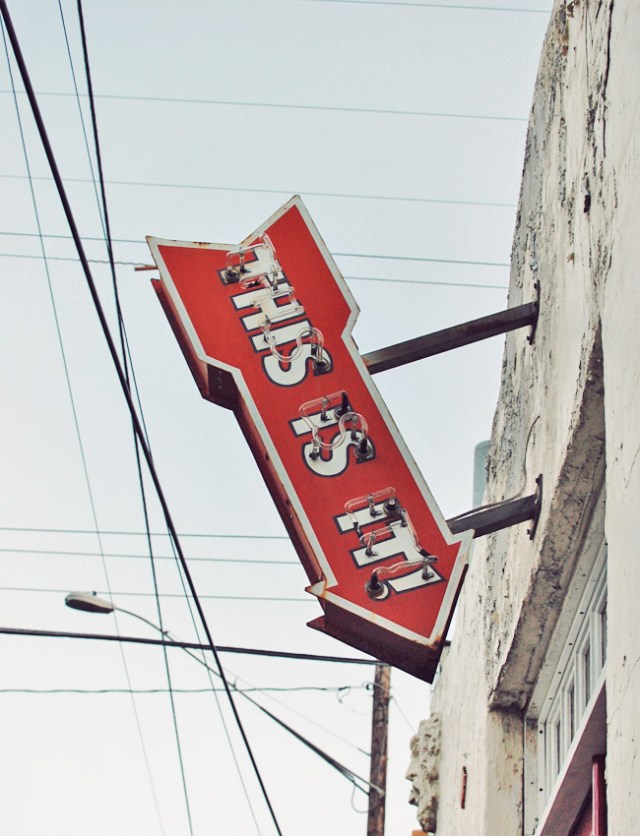 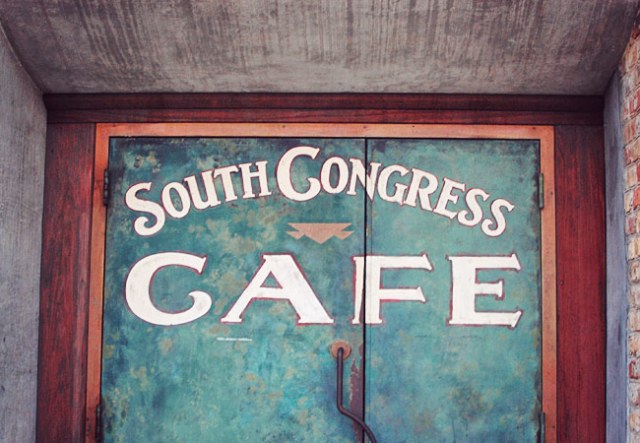 On Friday night, we walked down and explored South Congress St. and it was cool seeing so many vintage neon signs and non-chain businesses. Further down the road, we came across Amy’s Ice Cream which has the craziest list of toppings I’ve ever seen. I held off, afraid that I’d get sick but Gala indulged in quite a mixture (they charge the same, no matter how many toppings you ask for!)

On our way home, we stopped at a 24 hour grocery store to fill up our silver B balloons. The morning would creep up soon enoughâ€¦ 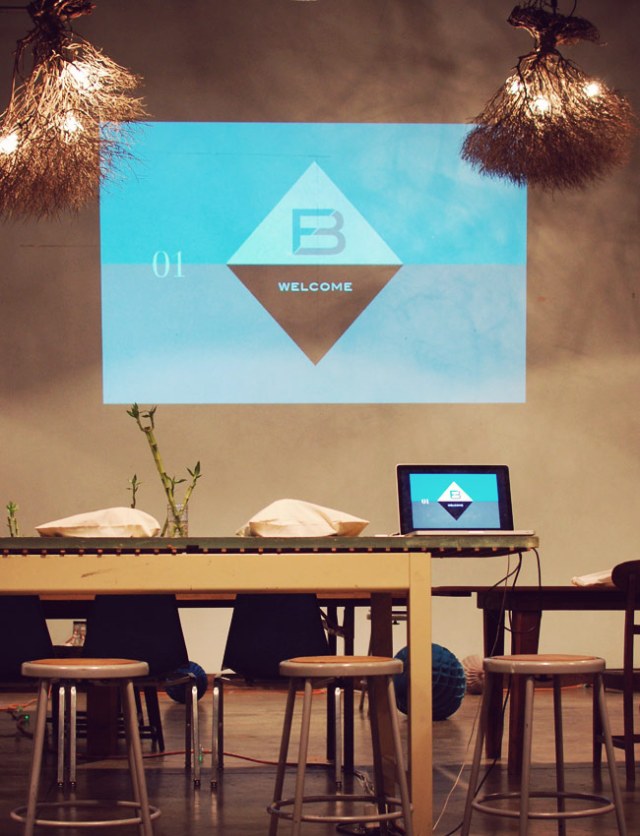 Once the weekend rolled around, it was time for our workshop at Vuka, a well-known coworking space. All I have to say is that the enthusiasm inside was contagious. Bakers, psychics and crafters filled the crowd and together, we dug in, corralled branding inspiration, developed new blog post ideas, refined taglines and mapped out our ideal readers. I’ll have a lot more to share about the experience on Monday! 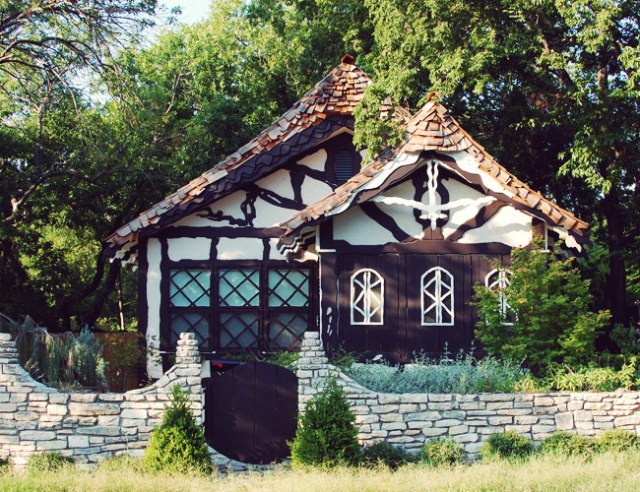 As we were driving to class on Sunday morning, Gala’s friend Ed took us on a scenic route and as we passed by this house, I made him pull over so I could jump out and get some photos. My friend Laurel had just instagrammed a photo of it the week before and isn’t it amazing?! 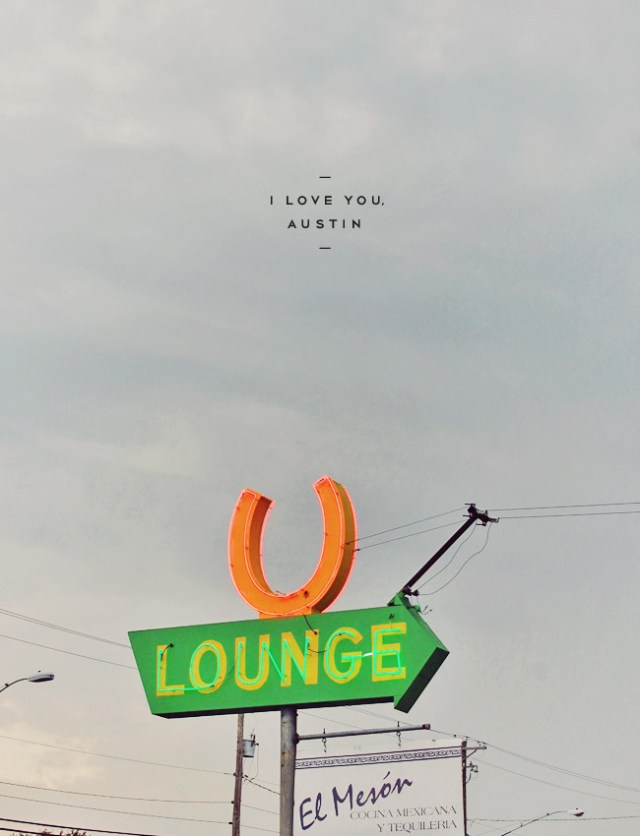 My time in Austin flew by in a flash but that’s okay because I’ll find an excuse to come back soon enough. Maybe just not in August next time! Have a great weekend, everyone! I’m frantically packing for New York, London and Greece. Having less than a week home between Austin and my trip to Europe has proven trickier than I thought but I know that once I get through this to-do list, big adventures await.

Any awesome weekend plans you’re looking forward to as this summer winds down? 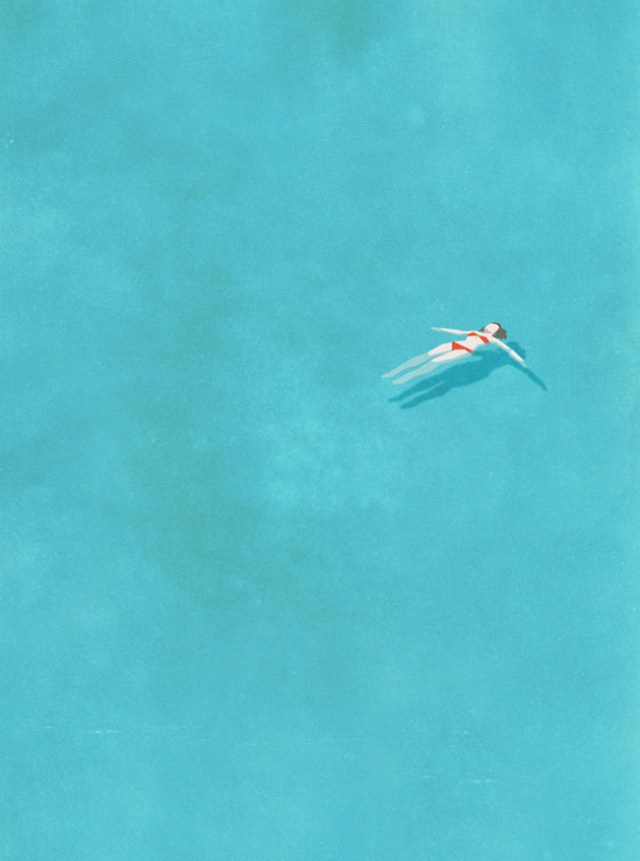 â€¢Â Find out how two friends turned their online shop into a brick and mortar store.

â€¢ As a blogger, what fears have you managed to overcome?

â€¢Â Learn how to make your own sugar-free granola.

â€¢Â Would you consider hiring a matchmaker?

â€¢Â Remember when we took the time to get our photos printed and put together albums? This DIY album is inspiring me to get back to basics.

â€¢Â How to hail a cab in New York City.

â€¢Â I love these quick and easy smoothie recipes.

â€¢Â I’ve always admired the branding of the Nolitan Hotel in New York but Bri shows us that the interiors are great as well.

â€¢Â If you’re looking for some perspective, this is how big the moon is.

â€¢Â It’s hard to believe that a few of the founding fathers of the U.S. were teenagers.

â€¢Â Bookshelfies features folks taking selfies in front of their bookshelves. Hey, there’s a Tumblr for everything!

Image: Alone by Cosmosnail on Behance.

Posing With Patina Part 3: A Bouquet of Balloons and a Killer View of Brooklyn 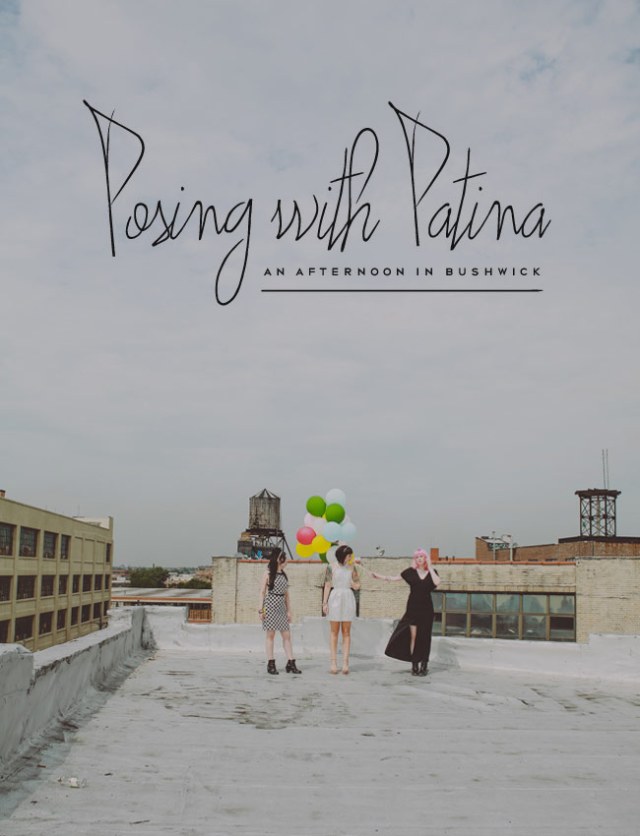 Over the handful of hours we’d spent shooting with Patina, we thought we’d seen it all. A new, elaborate set of vintage goodies met us around multiple corners but they had one more surprise waiting for us: the rooftop. 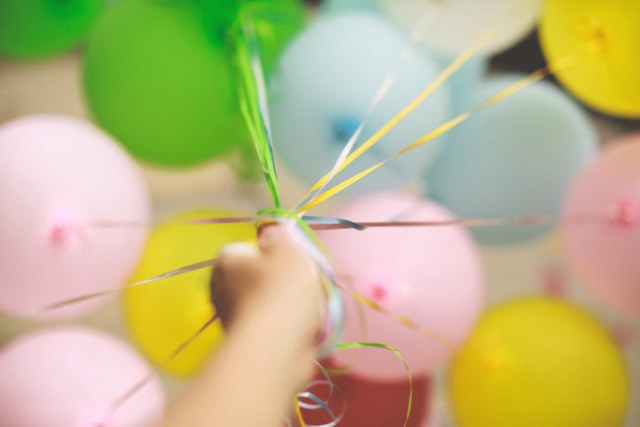 As we climbed the narrow metal staircase in heels and excitedly ran out onto the roof, a gust of wind suddenly blew the door shut behind us. We hadn’t thought to put the cinder block behind it and we glanced back and forth at one another, realizing that nobody had a key.

The roof was blazing hot and we started to shoot but it was hard to be carefree when we weren’t quite sure how long we’d be up there. Luckily, within a few minutes some of the crew climbed up to check out the shoot and we squealed with relief when we saw them. 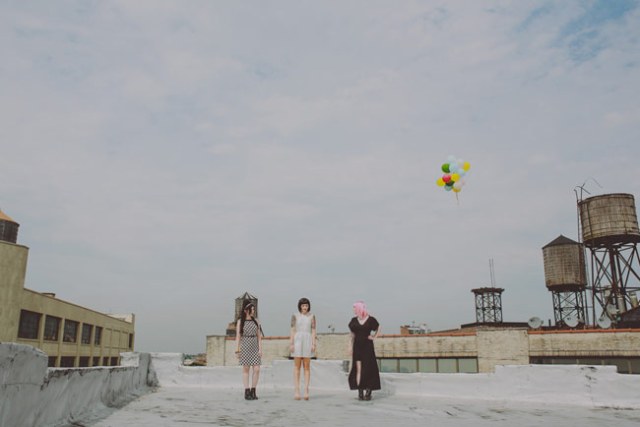 The roof was the ideal spot to let go of our bundle of balloons. Up, up and away they went. We watched as they floated through apartment buildings, past water towers and then completely faded from sight. 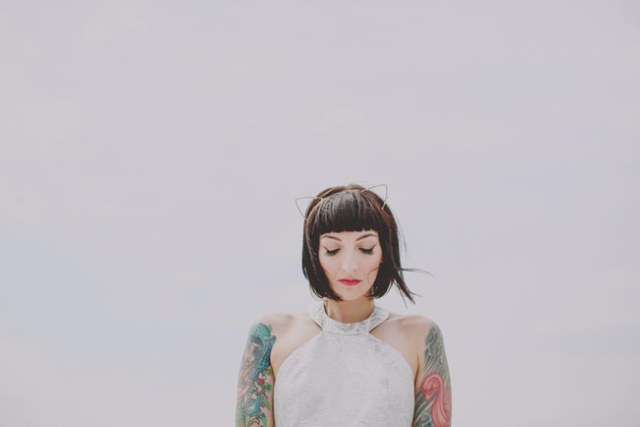 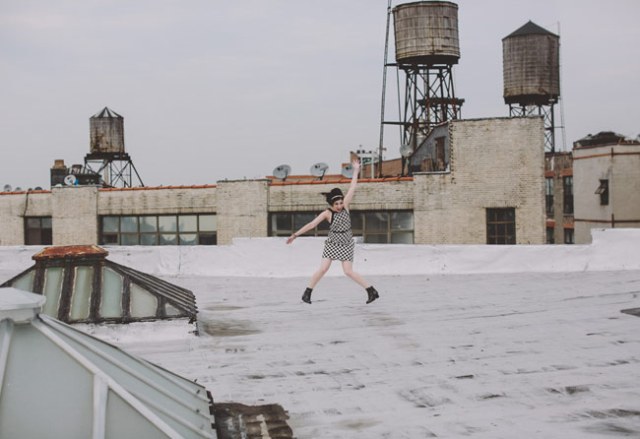 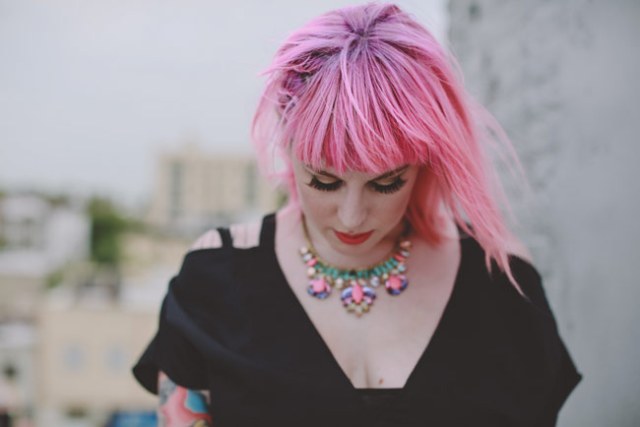 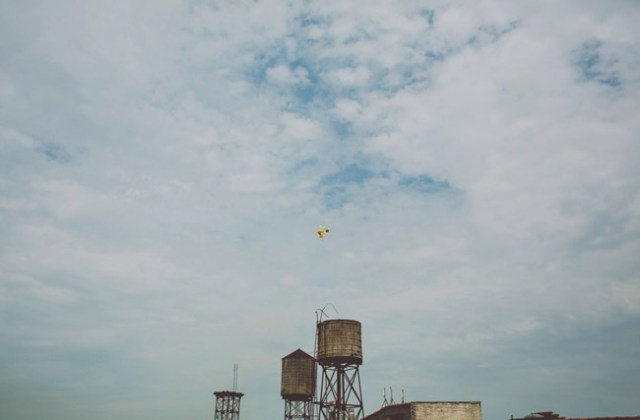 The whole day had felt slightly surreal and ending it standing on the edge of a silver roof overlooking the Brooklyn skyline just felt right.

Even sweeter, we were given a video that commemorated the whole experience, from beginning (giggling and makeup-free) to end (watching the balloons drift away). Not a bad way at all to spend the day with two of your BFFs. Courtney of Love + Brain Films is so talented!

Thank you to the following team for making this shoot possible: 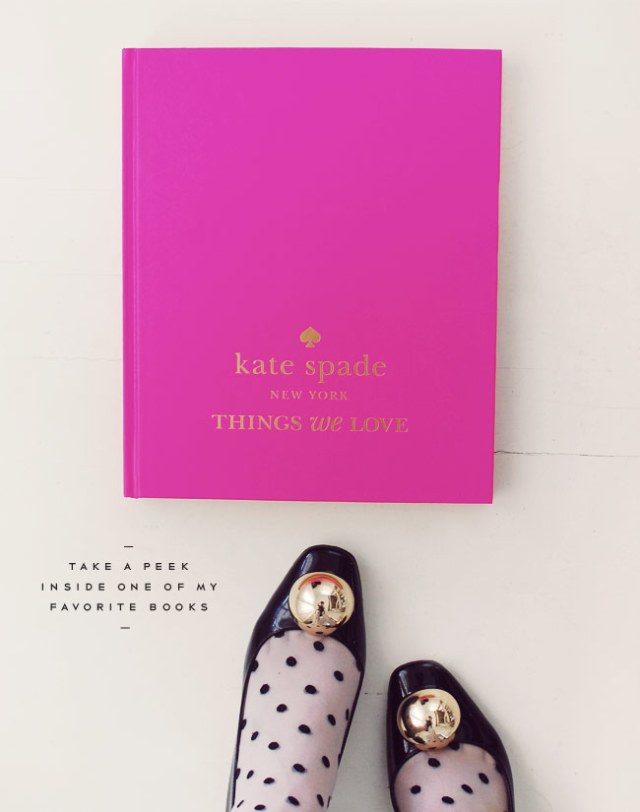 There are some books I repeatedly come back to no matter how many times I’ve flipped through their pages — this new column, Lookbook, is dedicated to them. Even though I spend most of my days absorbed in everything digital, I’ve always loved books and the escape they provide. While everyone else is adding titles to their iPads and Kindles, I’m surfing Amazon, looking for a new print fix. 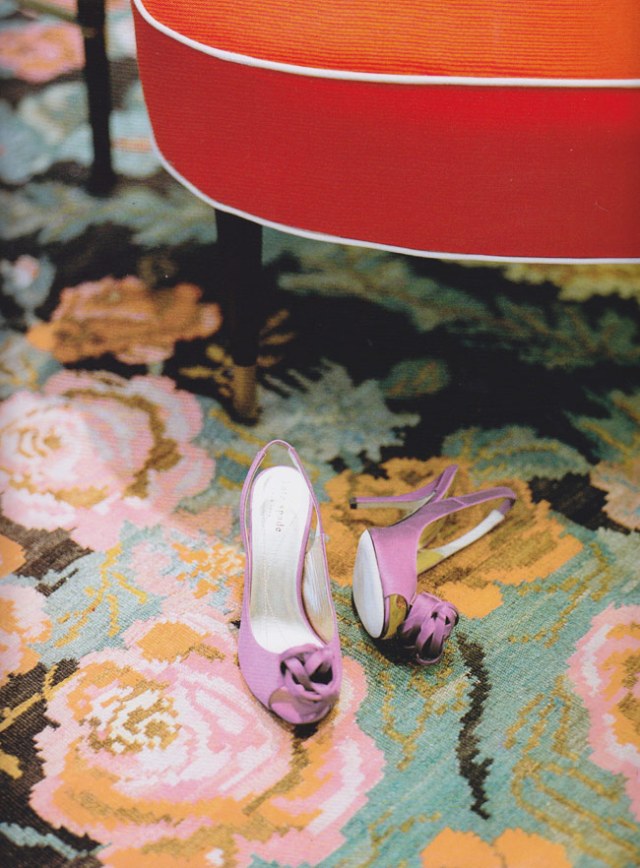 was released earlier this year as a nod to the brand’s 20th anniversary. In the year following up to its release, I’d seen the super-limited teaser online many times but sadly, this mini book wasn’t available to the public. 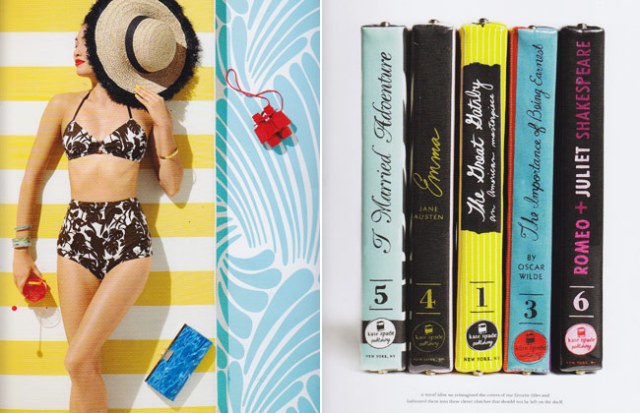 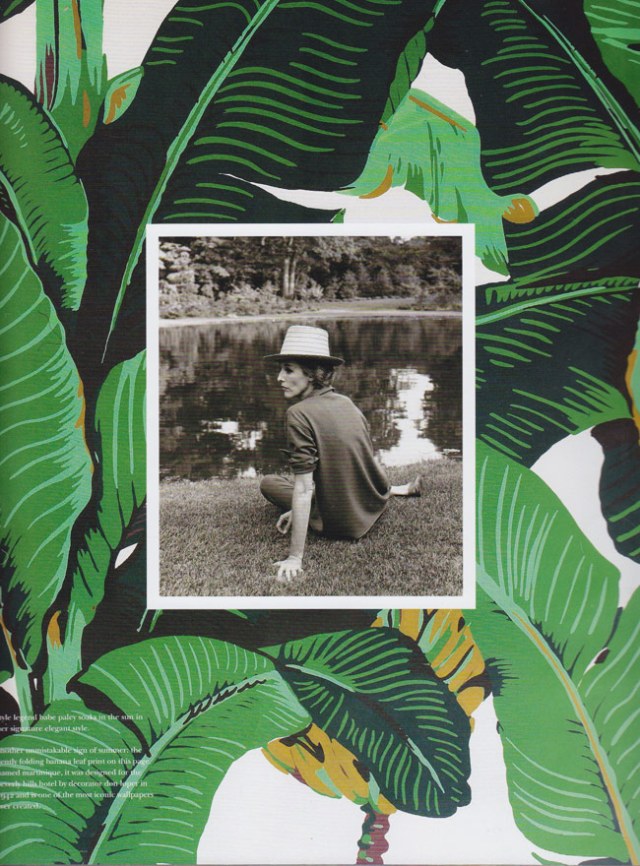 Then, in January, the full length edition was released and at 240 pages, was much more extensive than the mini version had let on. Six months after its arrival in my office, I’m still reaching for it constantly. 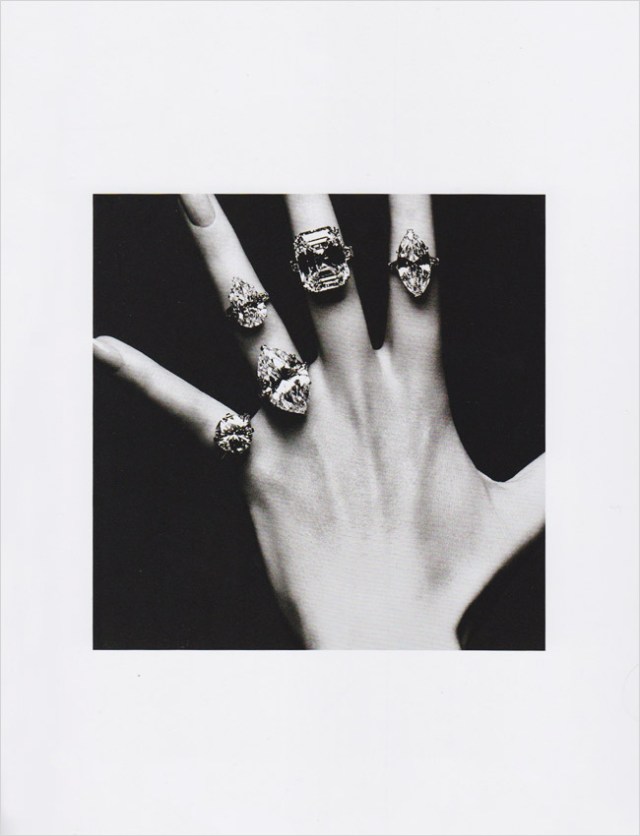 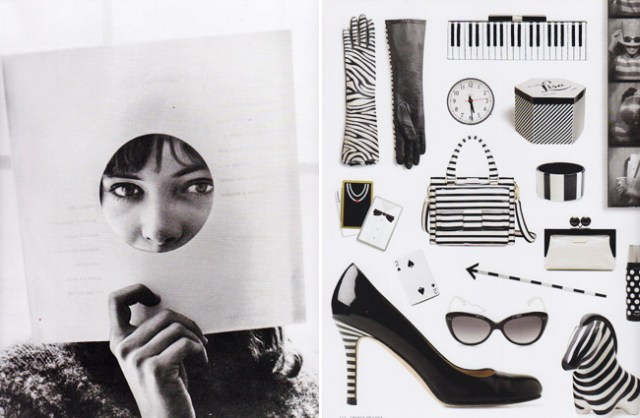 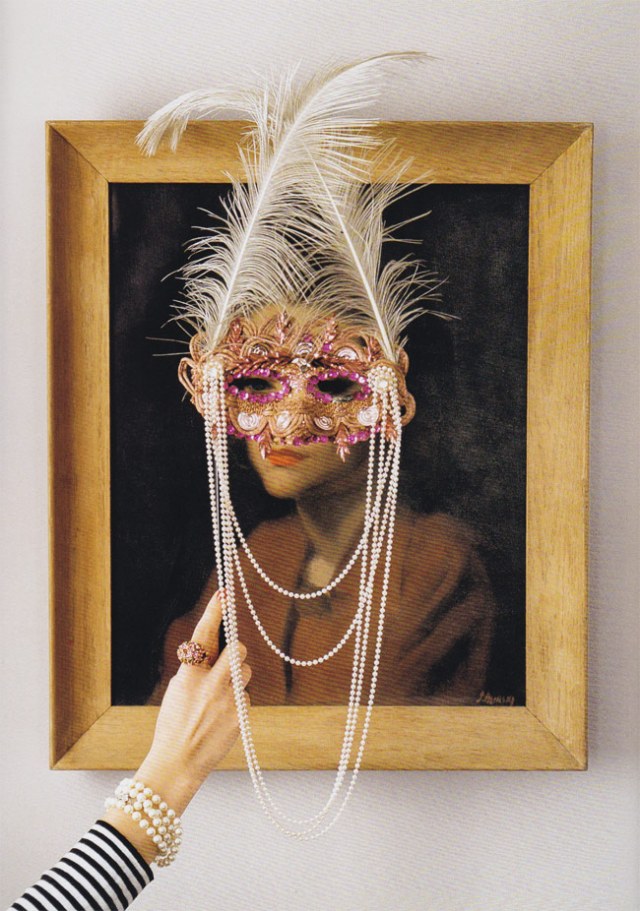 Brimming with 20 chapters of things the creative team at Kate Spade adores (including the color red and handwritten notes), this visual diary perfectly sums up the quirkiness of the brand through quotes, photos, film stills and curated layouts of knick-knacks. 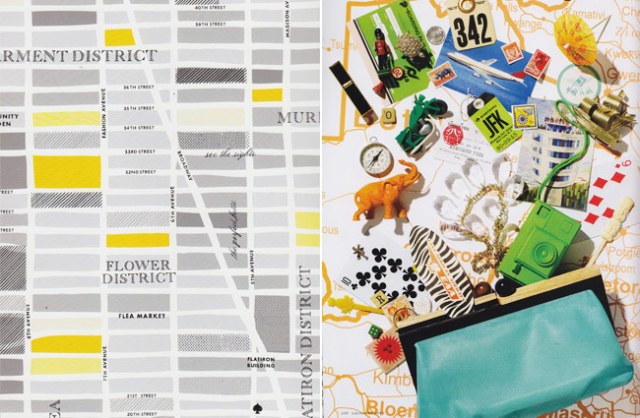 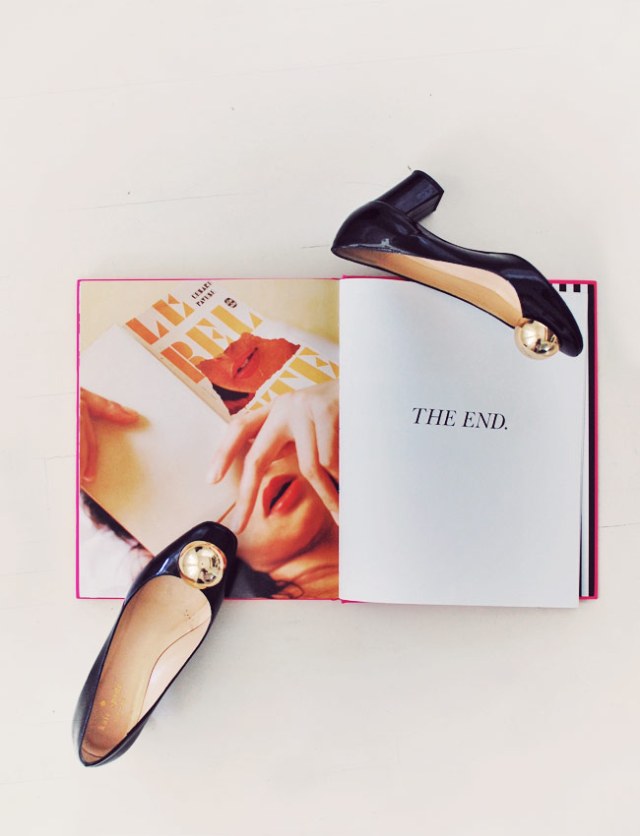 Things We Love is bound to get your creative juices flowing and remind you that even the smallest things in life are worthwhile of a celebration.

Images: Scanned from Things We Love