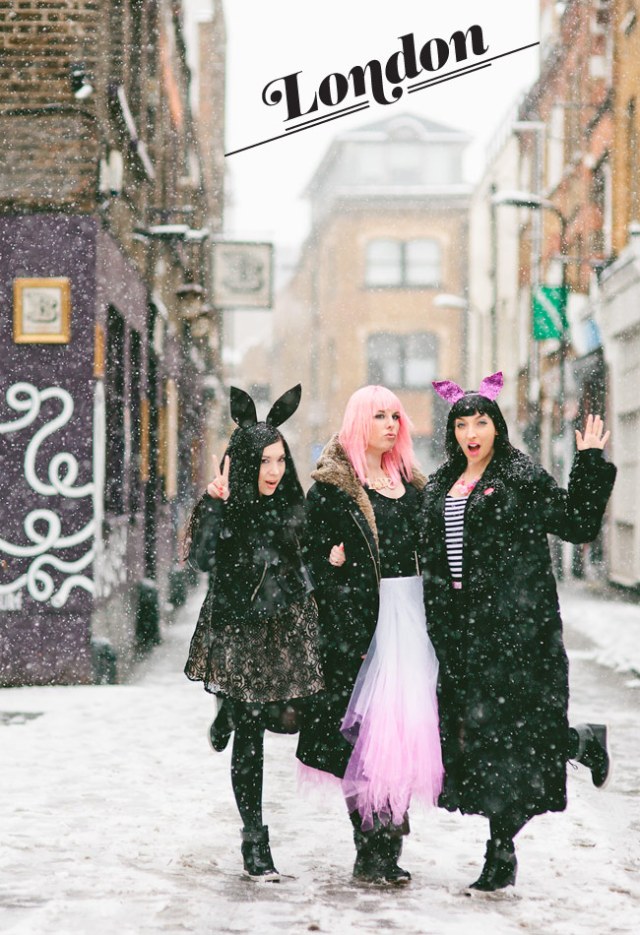 Hello again from London! It’s been quite the week and I wanted to check in and share these photos before we’re off in a few hours to teach at the Photography Farm (where we’re spending the night in Freddie Mercury’s old bedroom!)

Honestly, my routine has been a bit frazzled on this trip due to teaching two Blogcademy workshops and catching a killer cold (between the snow and feeezing temps, it seems as if half the city is sick). But when you’re visiting London for the first time, sitting around is not an option! Here are a few of my favorite moments thus far. 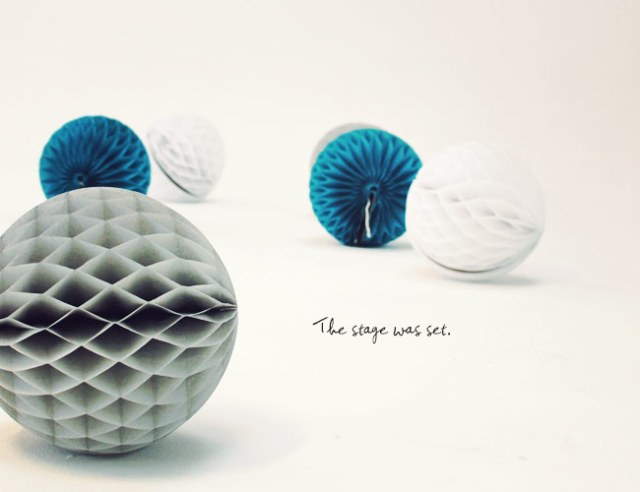 We held both Blogcademy workshops at the beautiful Curtain Road studios in Shoreditch (there will be a full recap soon). When we found out that none other than Tim Walker was shooting there during our two-day break, we nearly jumped out of our skin. The space was everything we could have hoped for and definitely set the bar for future classes. 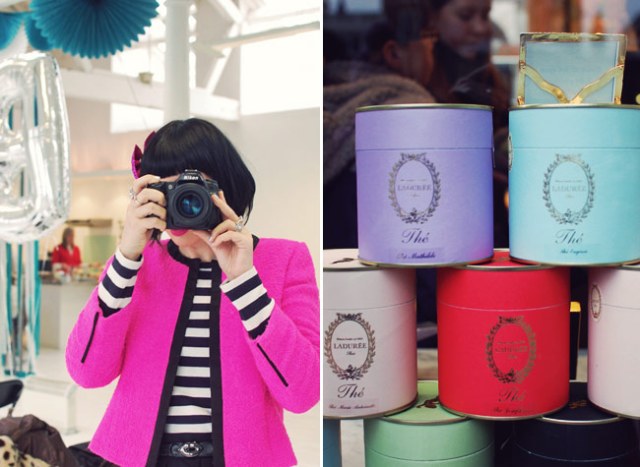 During my last few trips with Gala, she’s relied heavily on her iPhone instead of an SLR and I’ve been encouraging her every time to dust it off and put it to use — she has a great eye for composition and while I love my phone as well, nothing beats the atmosphere that a real camera creates.

And, on one of our days off, we visited perhaps the tiniest LadurÃ©e shop in existence. 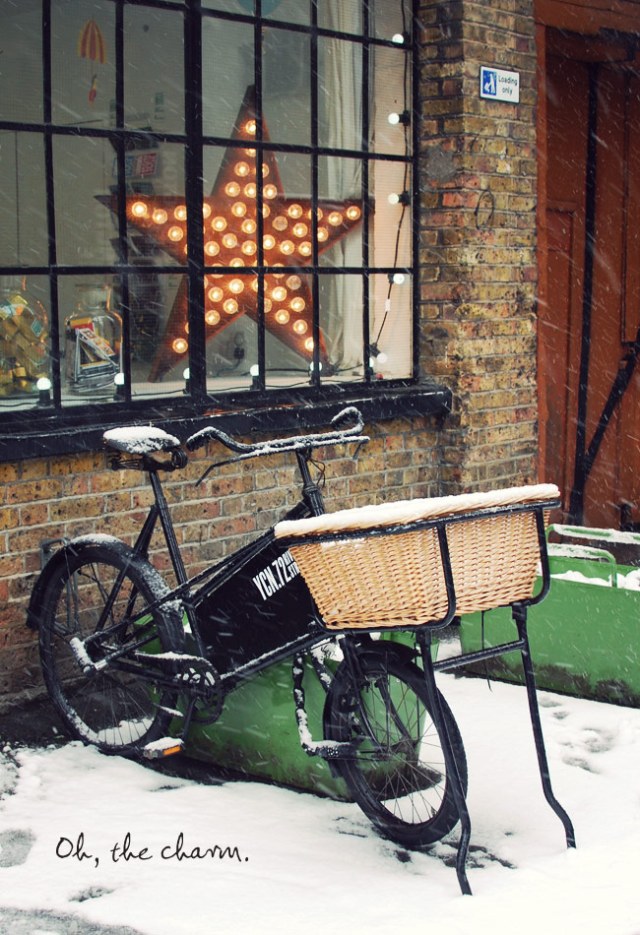 As we walked down a side alley during a Blogcademy lunch break, I spotted this scene. Details like this make me fall in love with London even more. I don’t want the new, I don’t want the chain stores and restaurants, I want to encounter scenes like this. 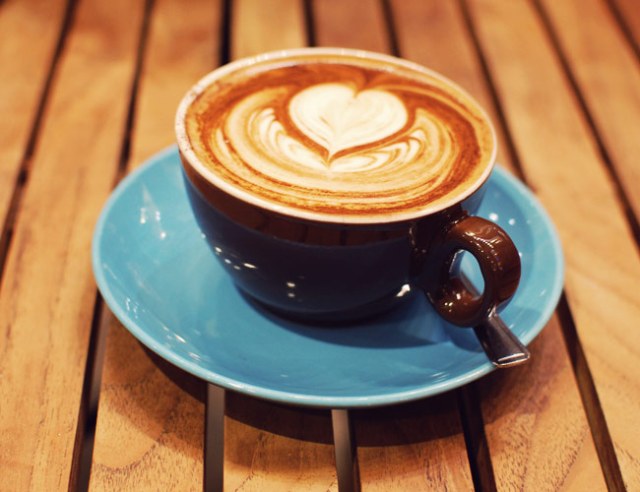 Our shopping trip to Westfield was a complete and total bust but the coffee shop we discovered inside more than made up for that. 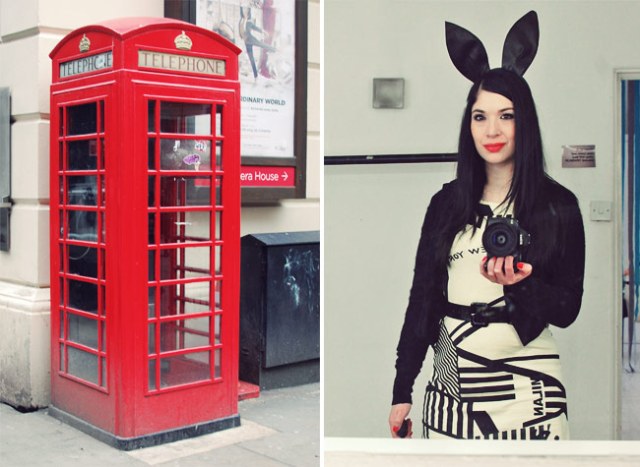 From my side of the pond, the red phone booths have always been one of the icons of London. As a tourist, I wasn’t aware that in actuality, they’re often used as a quick toilet stopâ€¦some things you have to learn the hard way. :/

I wore this Sonia Rykiel dress during the second London class and it was great to teach in something that was so comfy and covered in my favorite European cities. 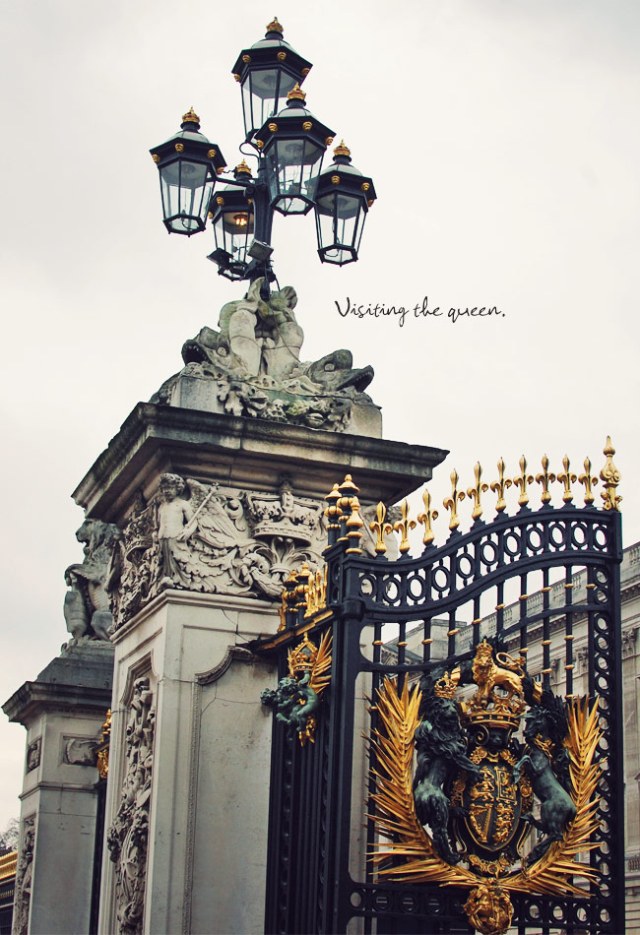 The first day I got into town, Kat yelled across the noisy tube, asking me if I wanted to stop by and visit the Queen at her stately home…I thought she called it Popcorn Palace! We got a good laugh out of that one. 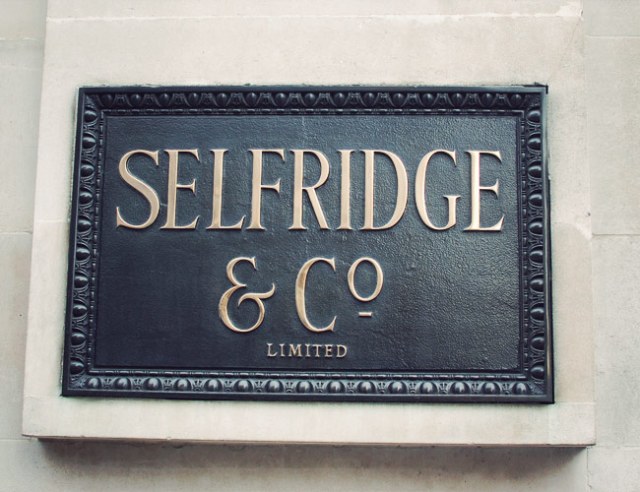 We quickly became enamored with Selfridge’s. Even with the sad exchange rate, we couldn’t be stopped from a little retail therapy. 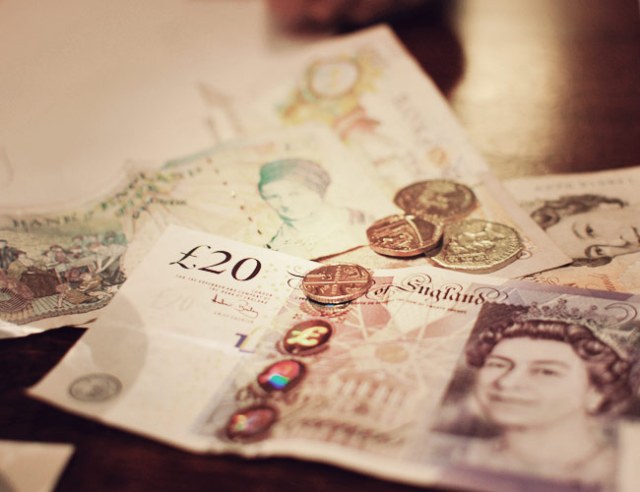 It took me awhile to get used to pounds. The best part were the Â£2 coins though, which I was unknowingly throwing around like they were 50 pence for the first few days. Live and learn! 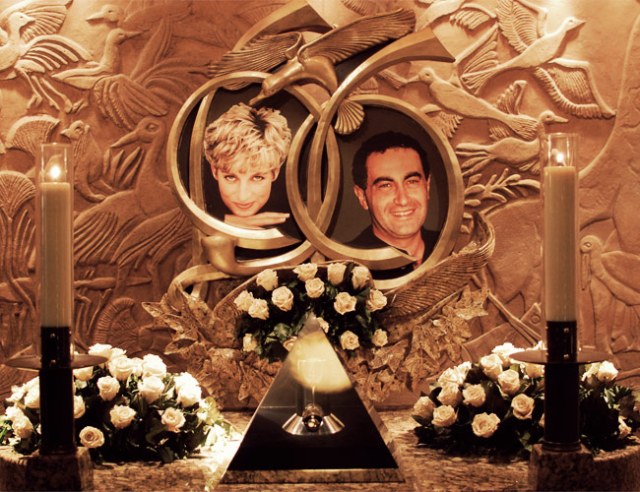 The weirdest thing I saw in London was the Diana & Dodi tribute in the Harrod’s basement. It was a little creepy to learn that the wine glass in the shrine was Diana’s from their last meal together. Harrod’s is so Vegas — it’s like Caesar’s Palace and The Mirage had a baby. 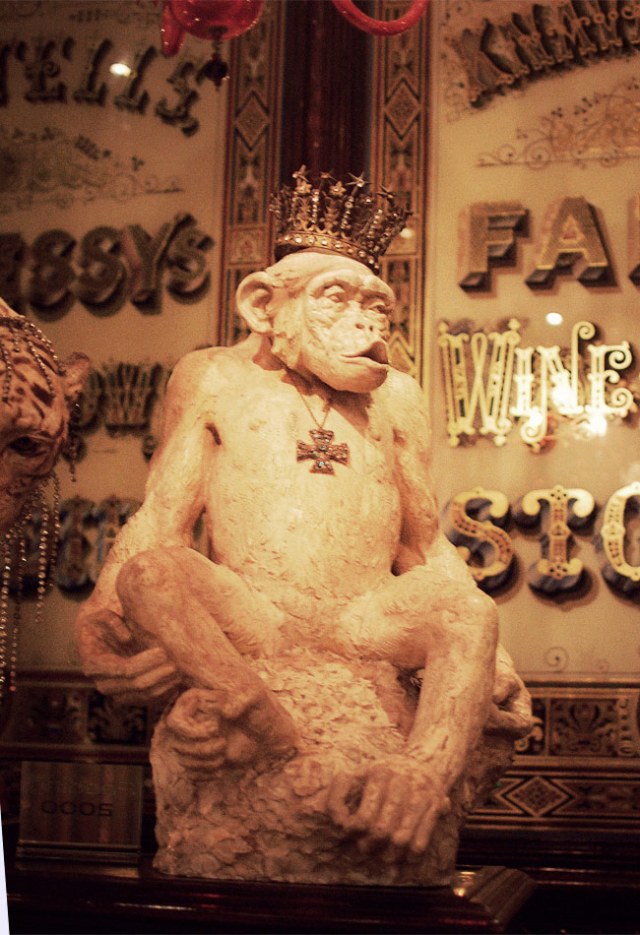 Our friend Laura took us out to a celebratory dinner at a restaurant that was stuffed to the rafters with bizarre statues and taxidermy. I had a special fondness for this monkey that is a dead ringer for the one on Michael Jackson’s Dangerous album. Bubbles, is that you? 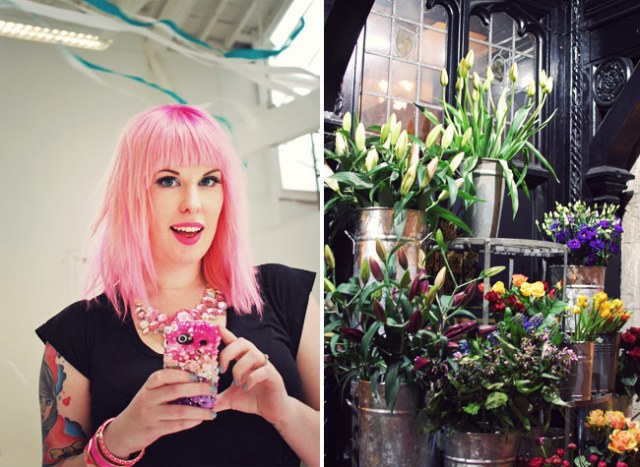 Kat and Gala have the most insane phone cases. And Liberty has the most gorgeous flower displays. 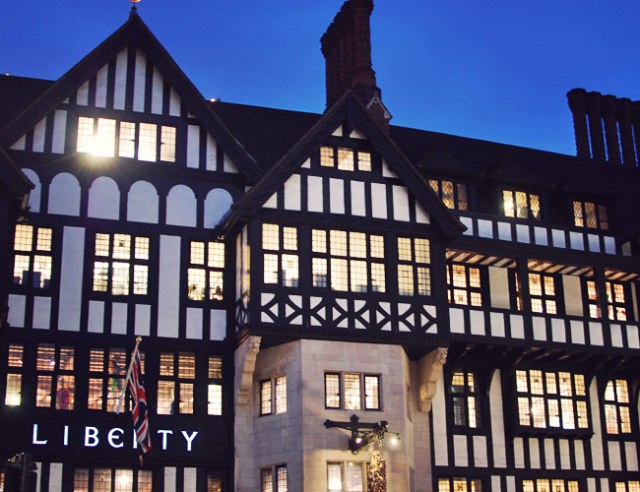 Without a doubt, my favorite store to visit during this trip has been Liberty. So classic and unique. Every time we passed by the tudor-style structure I demanded that I should be allowed to move in. 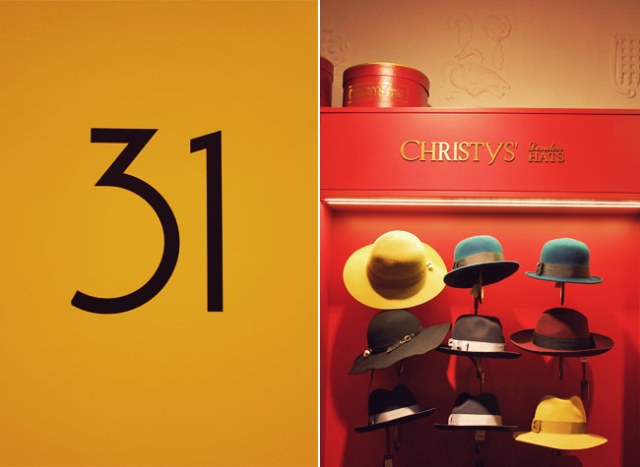 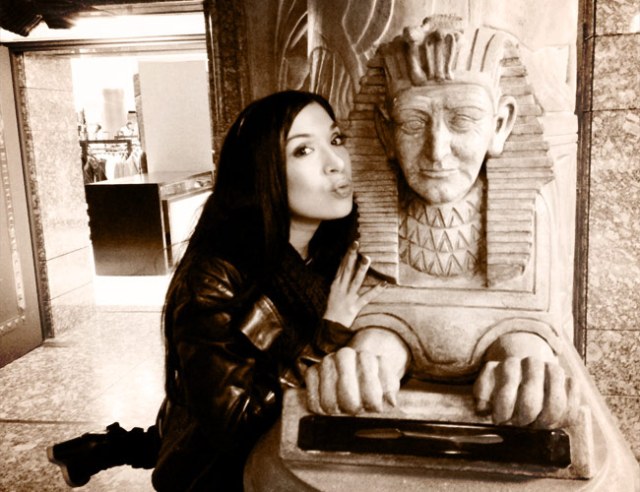 I’ll leave you with this little discovery — in the basement of Harrod’s you’ll find a bunch of Egyptian relics but upon closer examination, it becomes clear that The Sphinx has a new face. Yep.

Have a great week, everyone! Cheers!