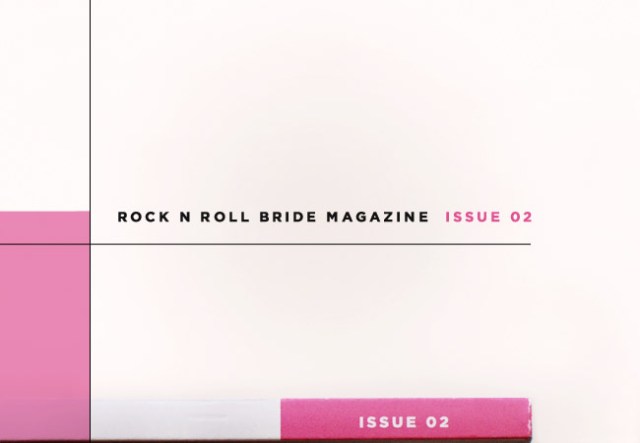 Have you seen issue two of Rock n Roll Bride Magazine? With hundreds of issues sold over the last few weeks, there’s quite a few floating around out in the real world now! This project was by far the biggest I’ve taken on to date â€” I’ve worked in teams before on print projects that were larger than this but those teams included art directors and production people. This time, the project from cover to cover was all me. And it’s no easy task putting together an 80 page magazine. I have major respect for people specializing in editorial design! 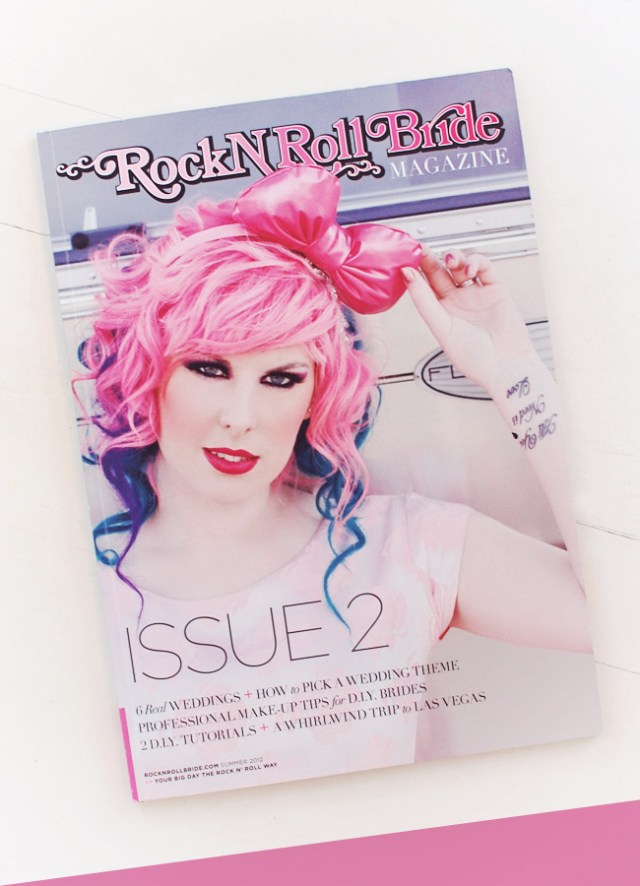 My dream was always to work at a big fashion magazine in New York. When I took the marketing and then design path, working at ad agencies seemed like the perfect way to combine my skill set but I still love editorial design. Over the years I’ve had the opportunity to work on look books and lifestyle-themed catalogs but never a straight-up glossy magazine. As Kat and I pushed her new branding further along, she, along with her husband Gareth had the idea to produce a brochure showcasing her blog to hand out at a wedding convention last year. We’d already done her media kit but she wanted people to be able to experience samples of her blog content in print. A 14 page brochure quickly morphed into a 40 page magazine because I saw a huge potential for her to take this a step further. 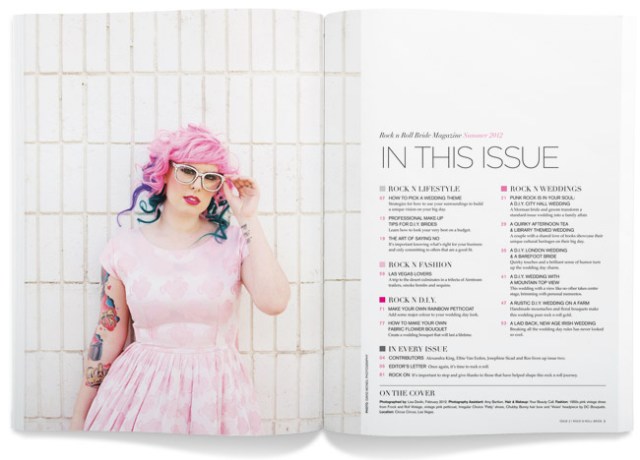 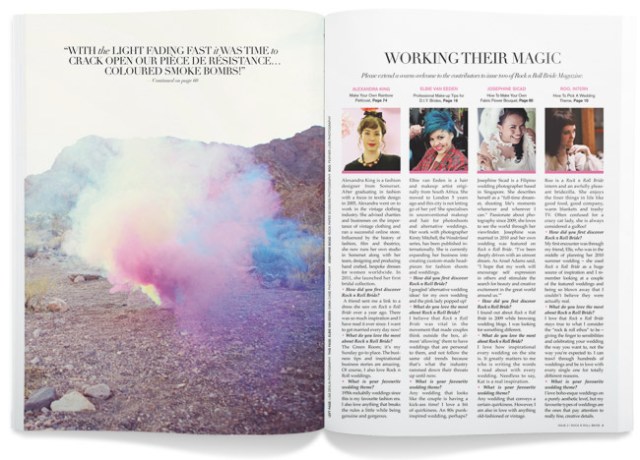 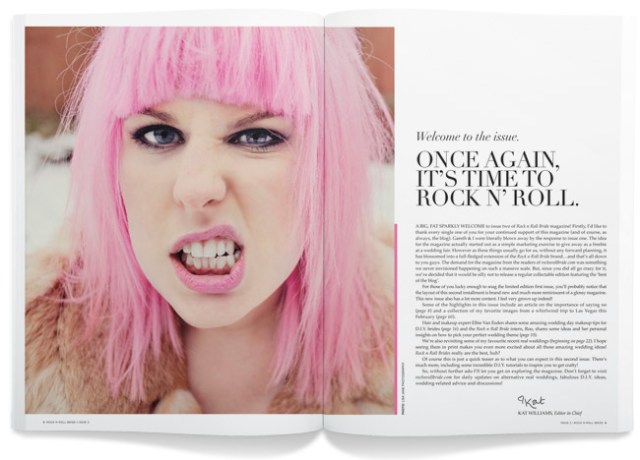 To our surprise, that 40 page first edition of her ‘magazine’ sold out almost immediately. The only logical conclusion was to do a second issue! I’d based that original 40 page issue off her media kit to keep the brand recognition high but it wasn’t in line with the standards of the magazines I admired. I wanted this ‘collector’s issue’ to be less of a memento and more of a legit glossy. To step it up for Issue 02, we redesigned the entire magazine, beefed up the content in every section, added a table of contents, letter from the editor and a contributors page. 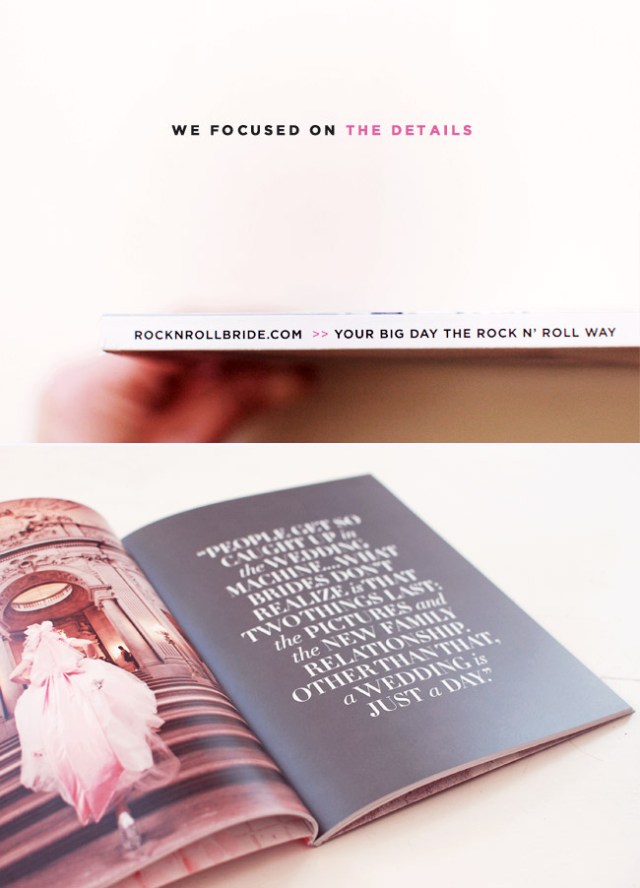 My favorite addition though is the last spread (see below). I like magazines that end on a high note or teach me a lesson â€”Â I wanted this issue to wrap in a heartfelt, positive way and my solution was to encourage Kat to write a thank you letter of sorts which I formed into a heart-shaped text box. And boy, did she deliver! This is a speech fit for the Academy Awards! I thought about the story we were telling the whole way through â€”Â you’ll notice that the Editor’s Letter at the beginning features a big ol’ dose of attitude with a serious snarl! And the issue ends with Kat walking off, quietly, down a winding road (which cut through the ghost town we visited back in February). 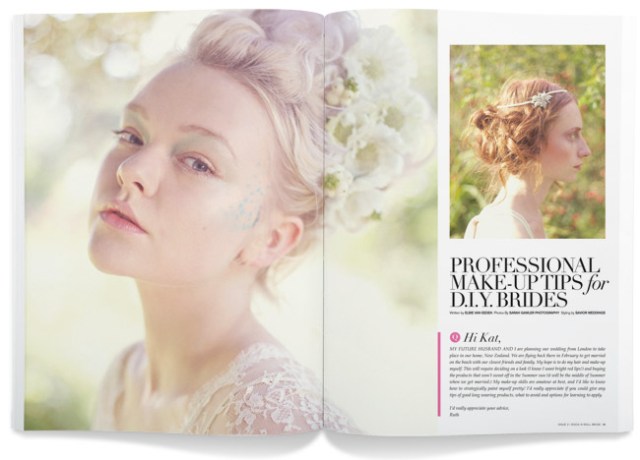 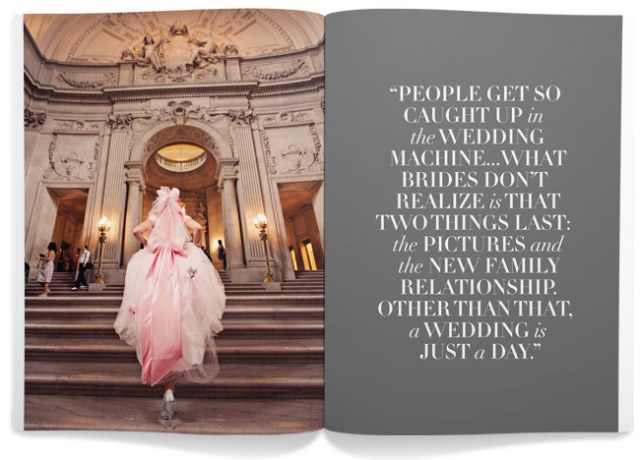 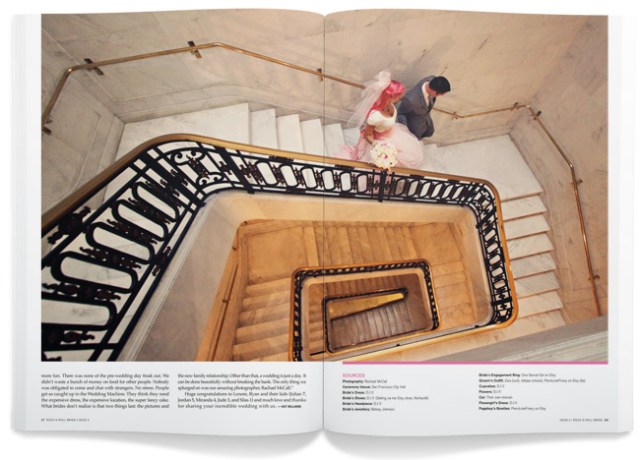 I’ll be the first to admit that I’m not well-versed when it comes to weddings. Kat is the queen of alternative weddings so as you can imagine, I had some serious catching up to do! I bought piles of Martha Stewart Weddings, cross-pollinated that with inspiration from W for some high-fashion flare and attempted to add in a dash of the pitch-perfect design sense that exists in O Magazine. 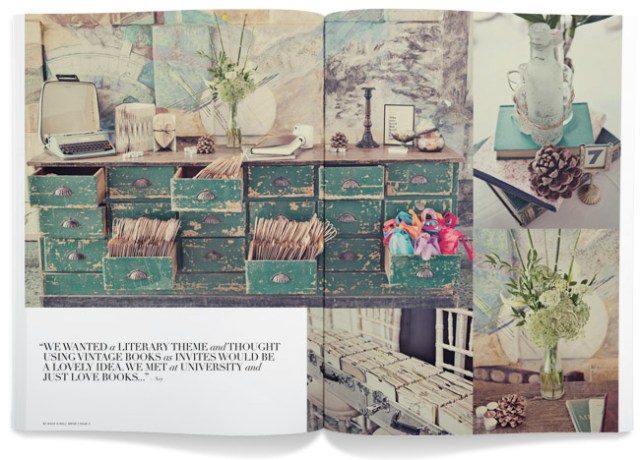 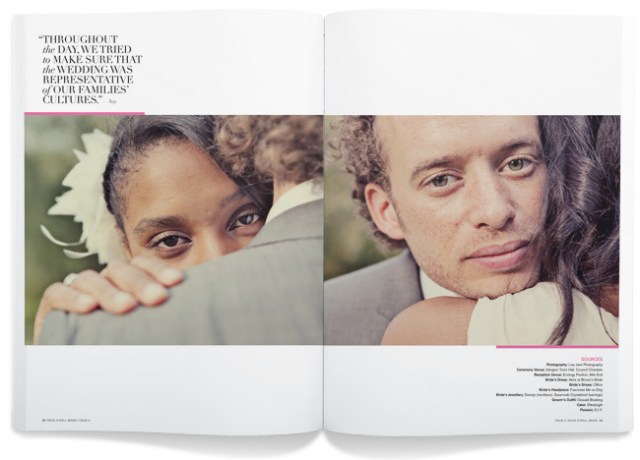 My goal through the process was to keep the layouts crisp and uncluttered (wedding magazines use a LOT of white space) but still have those moments of rock and roll flare Kat is known for (if you’ve met her, which I had the pleasure of doing in Vegas, she’s got a larger than life personality!) 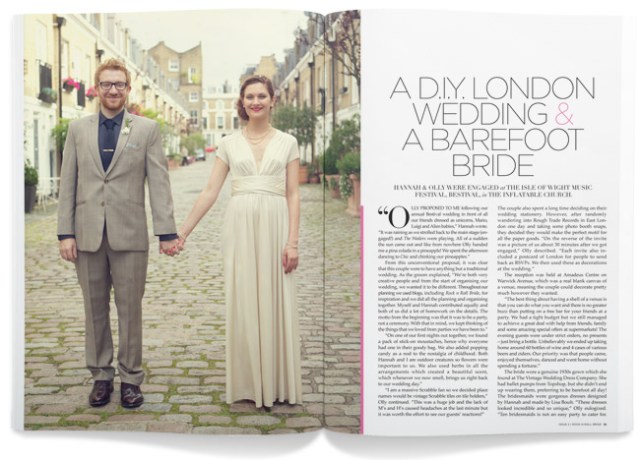 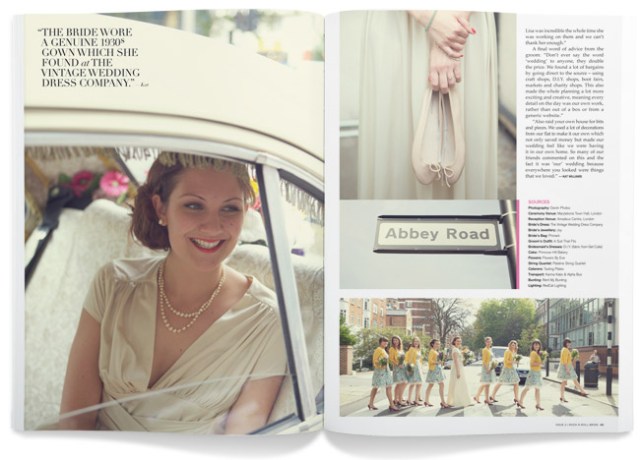 What I love about Kat’s magazine is that it’s a wedding AND lifestyle magazine. Instead of JUST featuring weddings, she’s also included a fashion shoot, a great business article and a handful of really cool D.I.Y. projects. And, the paper. After proofing this issue a crazy amount of times, I handed it off to Kat & Gareth who took it upon themselves to find the best paper stock they could â€” I can vouch that it’s heavier weight than a good chunk of the glossies you see on the newsstand. I couldn’t be happier with the outcome! 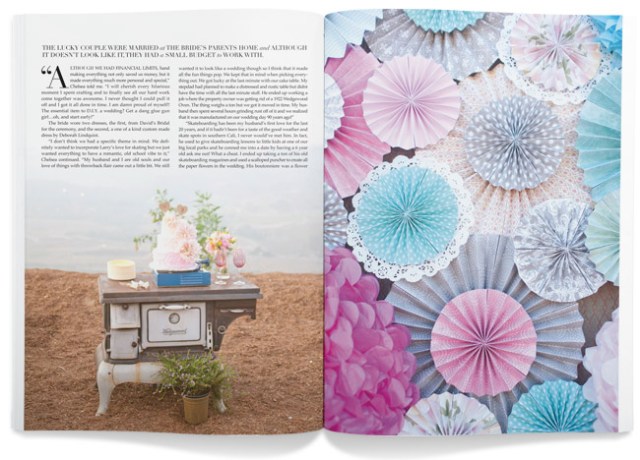 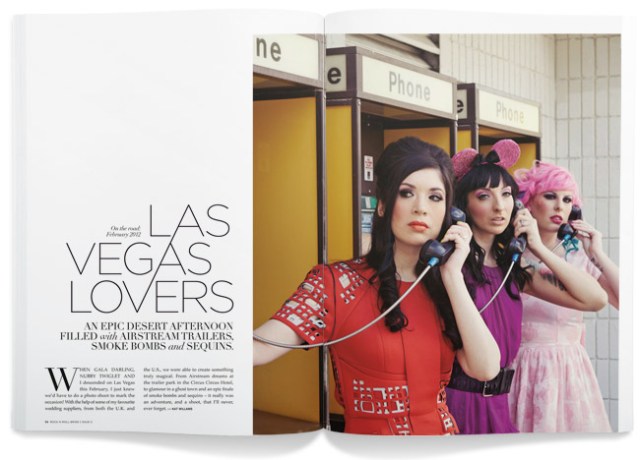 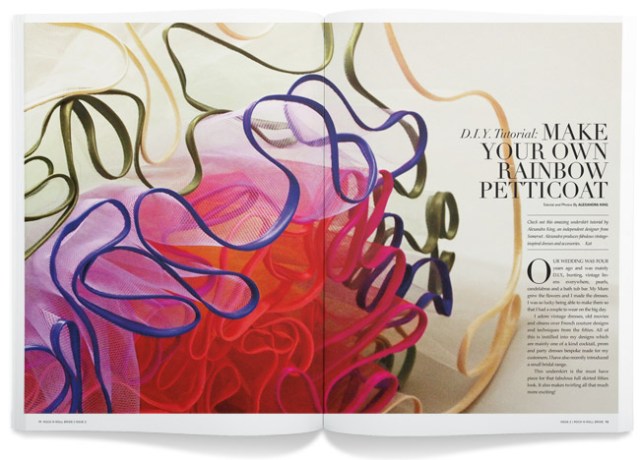 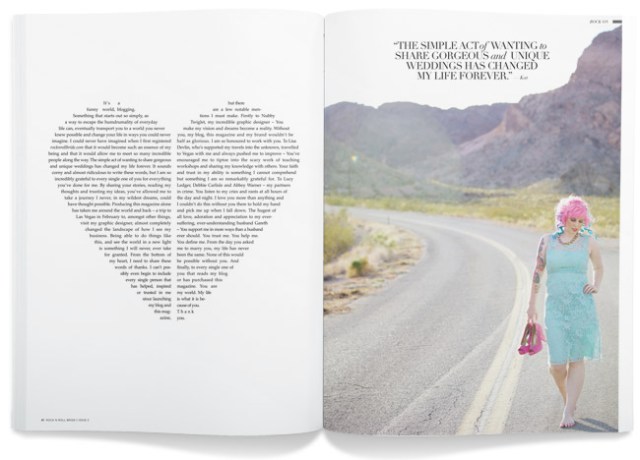 I hope you enjoyed this sneak peek inside the magazine. I have a lot more to share â€”Â tune in next week for a look inside the process I went through for tackling such a huge project. And, if you like what you see, there’s another 50+ pages of content not shown! Get a copy of Rock n Roll Bride Magazine right here!