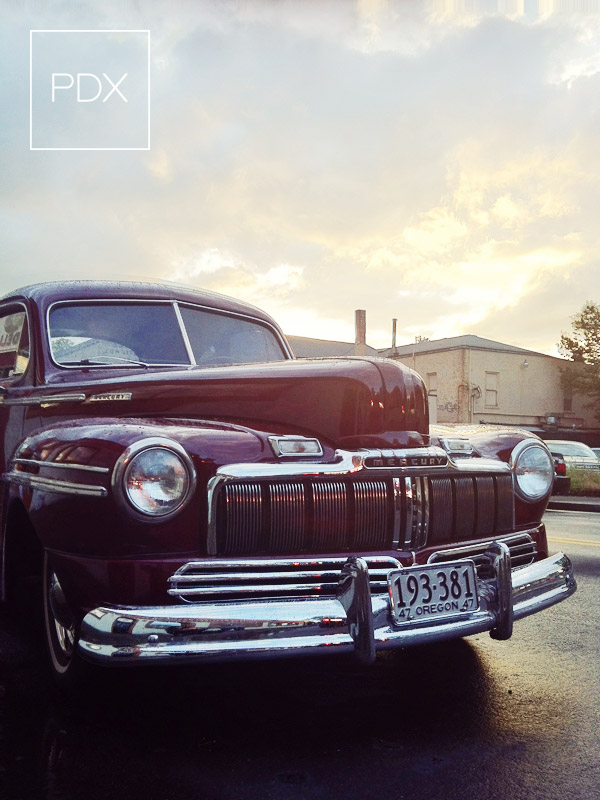 I have a thing for classic carsâ€¦which I probably inherited from my dad who has a few.

What a week! Sometimes real life sucks up internet time but that should be welcomed. Live a little! A lot can happen in seven days. I helped my grandparents ring in their 63rd wedding anniversary (!), did a shoot late into last night for an upcoming collab, started a branding project that’s totally up my alley, got all the windows in our house replaced (a total pain but necessary) and started the planning process for the launch of a really great project with friends later this year. 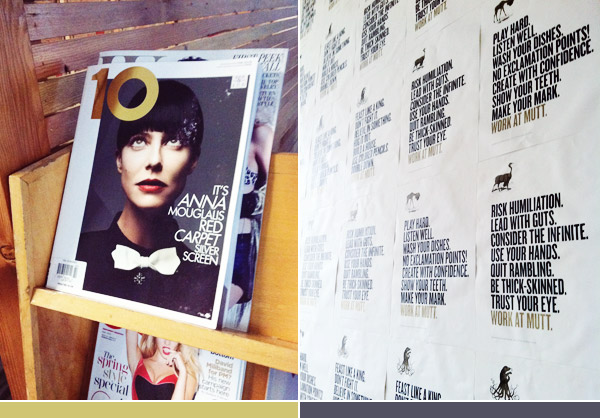 I fell a little in love with this magazine cover and cracked up at Mutt’s intern recruit posters. 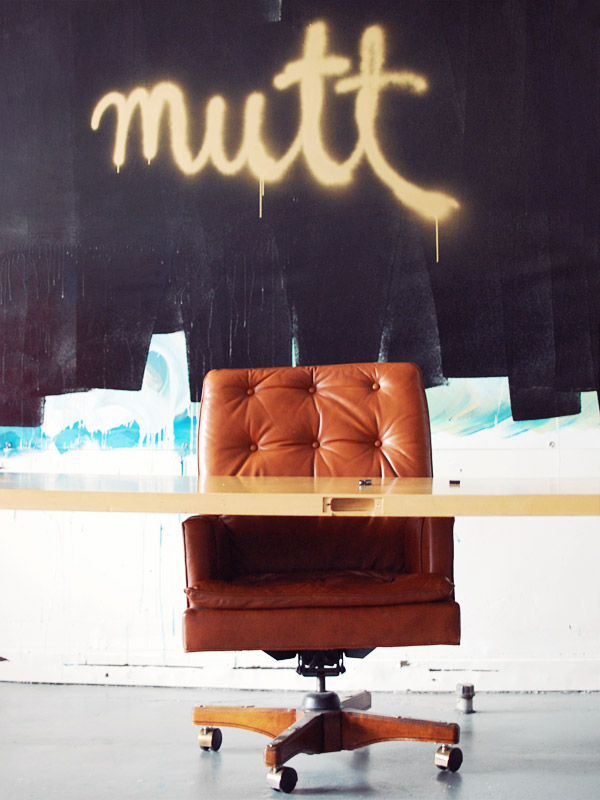 Last night, after I wrapped up a project I raced over to Mutt Studios for a collaboration & shoot with my photographer friend, Shaun. I skipped, jumped and danced around in spiked shoes and by the end, my legs felt like jello but I love that good kind of tired when you feel like you’ve given it your all for something awesome. 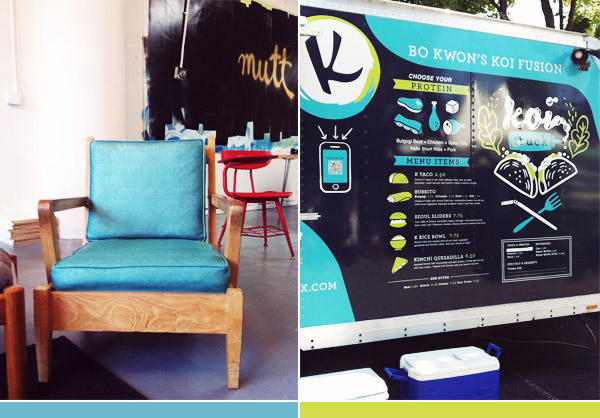 Another peek inside Mutt Studios and perhaps the best branding I’ve ever seen on a food truck. 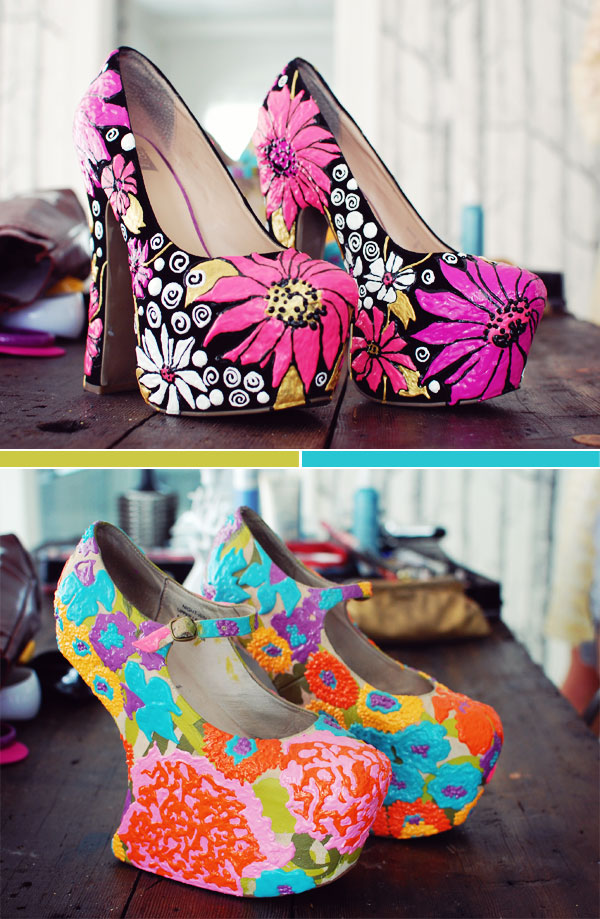 Over the weekend, a makeup artist was hanging out in our dining room, prepping a model to do a shoot with my brother and she just happened to bring these shoes she’d handpainted with her. Amazing, right?! Psychedelic puff-paint..I’ll take it! Edit: The shoes were customized by Randi Whipple. 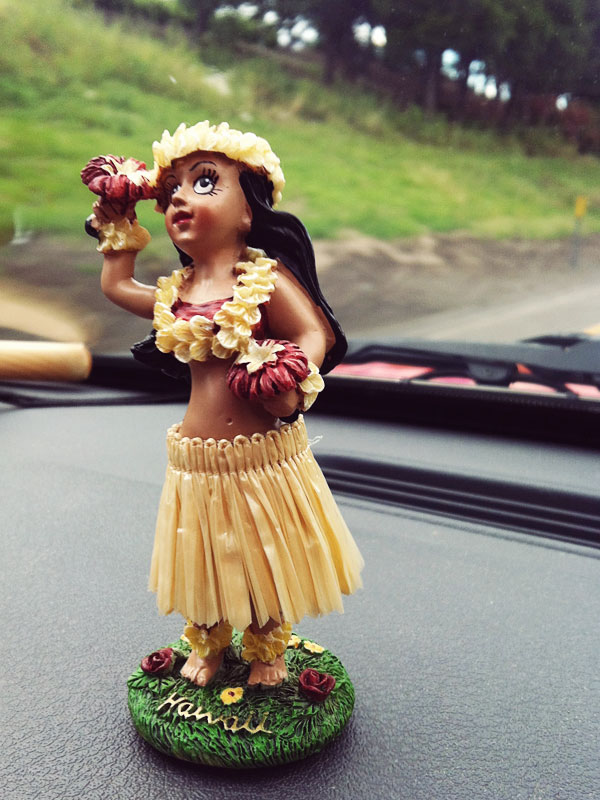 When I heard that my grandparents were in town for their 63rd anniversary, I dropped everything and hopped in my cousin’s truck for a joyride out to the suburbs. We found my grandparents in the back of a bar, gambling and sipping mix drinks, true to form at 85 and 83, respectively. Amazing. 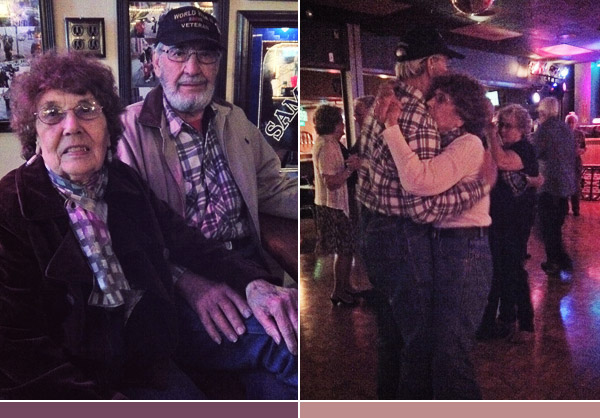 To see them so happy and going strong after all this time is extra special because my grandpa, who had never even been to a hospital in his entire life, had a brain aneurysm 2 years ago and there was a good chance he wouldn’t make it through surgery. To be able to dance with him at the local Eagles club over the weekend was a pretty special moment. “Grandpa, I don’t know how to dance! Grandma is soooo much better than me!!!” 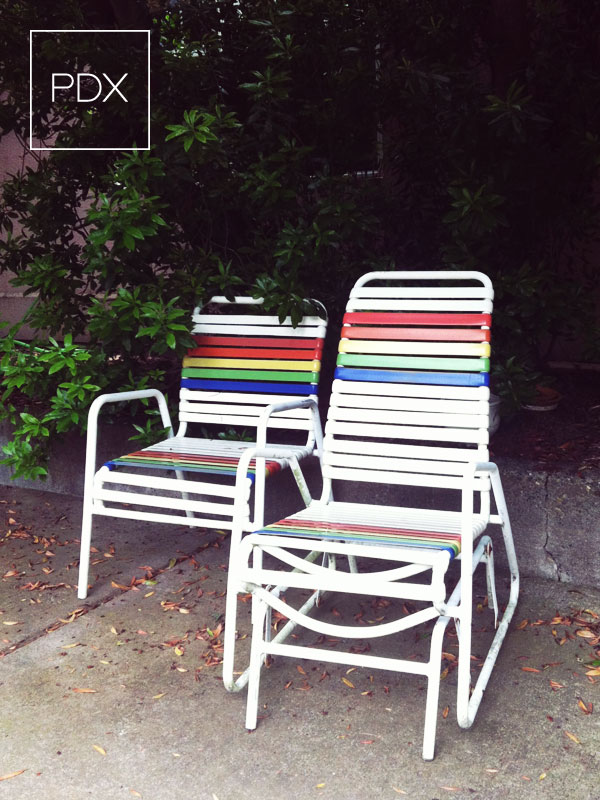 The 4th can’t get here soon enough. Looking forward to chillin’, reading a stack of magazines and sitting around at our neighbor’s barbecue. Doesn’t get much better than that. I hope you’re having an awesome weekend! 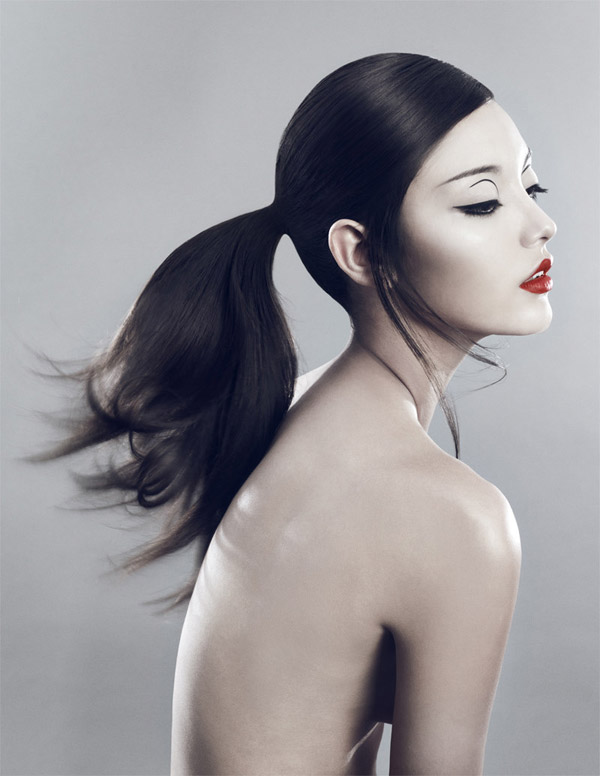 â€¢Â Graphic designer Milton Glaser, who just turned 83, has some wise career insight: “If you can sustain your interest in what youâ€™re doing, youâ€™re an extremely fortunate personâ€¦”

â€¢ I always like to hear what tools other designers and artists consider to be their must-haves. Promise Tangeman shares hers.

â€¢Â The first ten years of blogging are the hardest.

â€¢Â Have you heard about Creative Bug workshops? On this how-to website, you can subscribe to video classes to learn everything from screen printing to bookbinding to jewelry making for only $25.00 a month with unlimited access!

â€¢Â How can you manage the balance of work, life and side projects?

â€¢ If your dream is to move to New York City, read this and get inspired.

â€¢Â The trend of digital buzz replacing newsstand buzz continues and magazine covers are getting edgier in an effort to keep our attention.

â€¢Â What happens when life is seemingly perfect but you still feel stuck?

â€¢Â I love these tips for designing your website.

How do you build up your font library? Buying fonts one by one seems to be a very expensive endeavor. And what is the anatomy of a bad font? My teacher said that all free fonts should not be used. Granted a lot of them are gimmicky, but dismissing all of them just like that seems shortsighted. 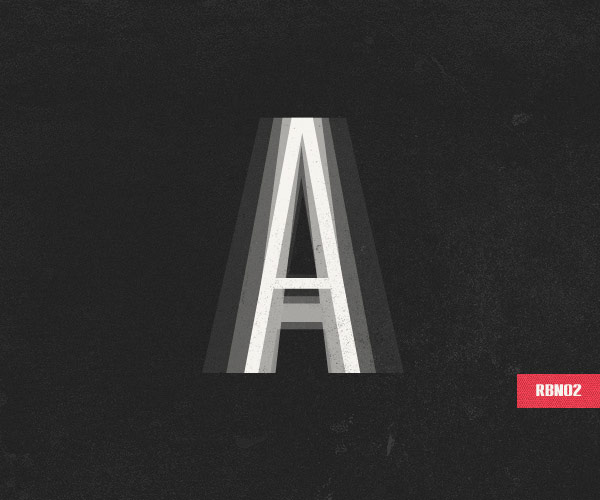 It’s good to start building up your font library as early in your career as possible. My advice is to invest in what you can, when you can. Bookmark your favorite fonts and when you start making money off your services, view purchasing fonts as an investment in your business. If you’re a freelancer, they’re considered an expense and therefore, a write-off. Save those receipts! I swear by Veer, House Industries, YouWorkForThem and Hoefler & Frere-Jones for high quality font options.

I was lucky to get off to a great start with my personal font library. During my first semester of college, my instructor provided us with a handful of the tried-and-true classics including Bodoni, Garamond, Caslon and Avant Garde. Having access to this limited but high quality collection of fonts got me going down a solid path and I used these over and over again in early design projects. From there, I gathered more during my first internship at an ad agency and as I began profiting from client work, I kept building my collection.

. This book is often referred to as the â€œTypographerâ€™s Bible” and for good reason. Penned by Robert Bringhurst (who also happens to be a poet), his attention to detail when it comes to typography is unparalleled. This book will teach you to appreciate even the smallest details in typography all while absorbing proper etiquette. 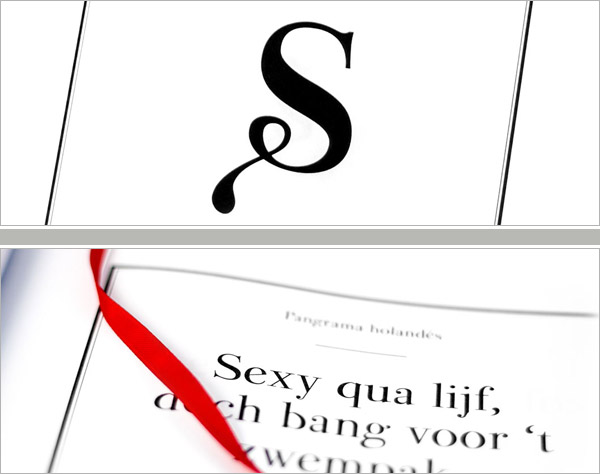 When it comes to free fonts, don’t write your teacher off completely â€”Â they are making a point that has some validity! I heard similar advice back when I was in school and with good reason â€” we’d all go crazy on free font sites, downloading and installing without much thought on our school computers and most of the time, we got lucky. But, there was that occasional misfire that screwed up our machines! Admitting that we’d installed a bad font and having our teacher call up the tech guy yet again was embarrassing. And so not cool.

Over the last few years though, the tide has began to turn and the abundance of high quality free fonts is pretty unbelievable. To prove my point, here’s the 100 greatest free fonts of 2012! Seriously, this is the best roundup I’ve ever seen.

Today I’m sharing some of my favorite pages from the latest House Industries catalog (get your free copy here) and the Photo Lettering brochure (have you seen all the cool fonts they offer at just $2.00 a headline?) 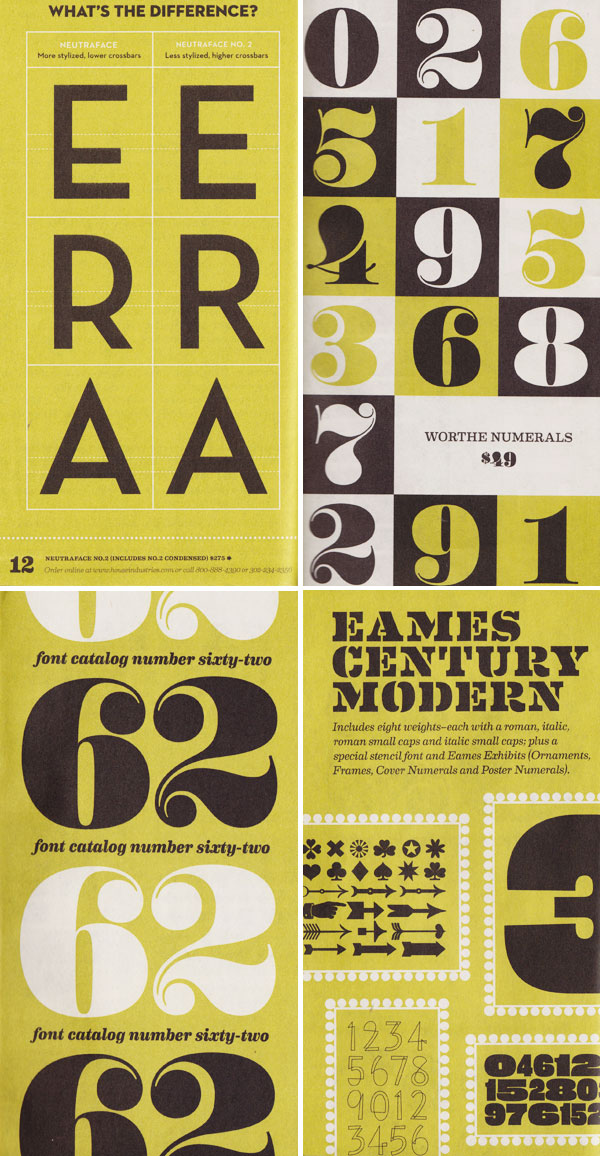 Both of these pieces were also part of the Catalog Collector Bundle I shared last week. Fonts have been filling my brain even moreso than usual lately as I’m working my way through a combination of personal and professional identity projects that are requiring completely opposite looks. Are any of you working on any inspiring design projects that you’re excited about these days? 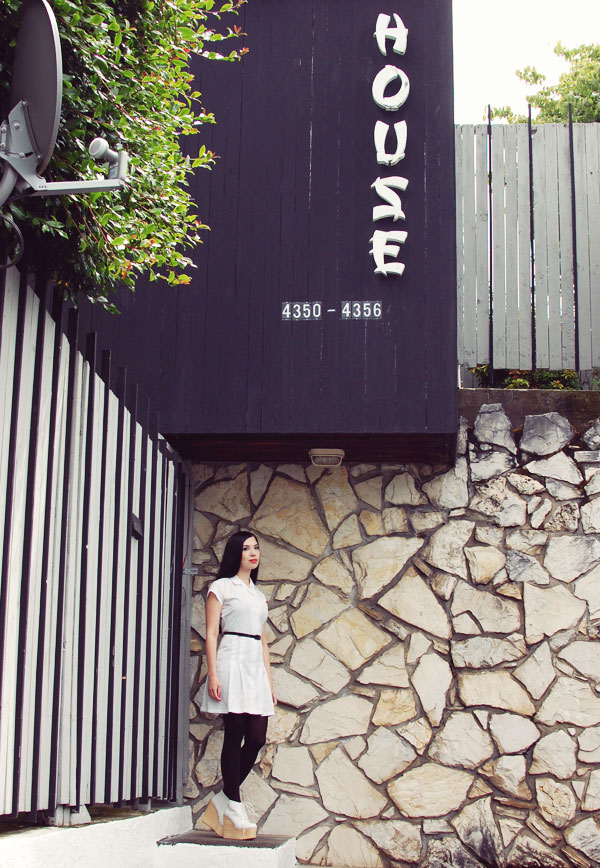 I’m really excited to be sharing this outfit post today because I’m wearing the item that’s been in my wardrobe the longest. This white dress is a vintage gym uniform (I’m guessing it’s from the 60s based on the tag) and I picked it up at a Goodwill for a few dollars when I was 16…which was 14 years ago! My friends from high school probably remember it well â€”Â I wore it all the time, mostly with a bunch of Red Cross buttons affixed to the pocket and paired with striped tights. 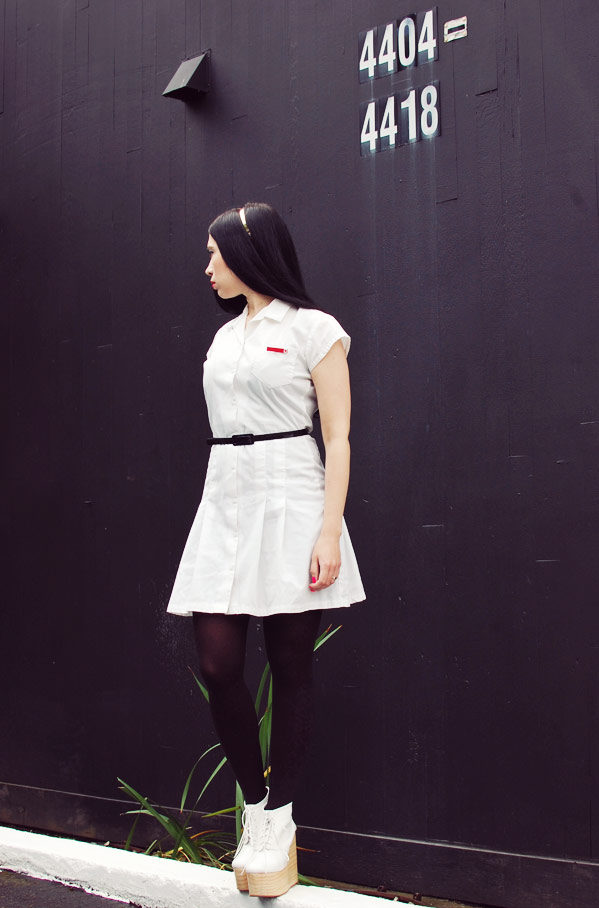 One of my constant style inspirations has always been uniforms. Perhaps part of the appeal of creating a uniform-based look is the fantasy of not having to think about what to wear every morning and instead refocusing that time and energy on other creative endeavors. I’ve noticed that a lot of fashion designers and artists seem to have a daily uniform, probably because it gives them a clean slate to focus solely on their new designs. 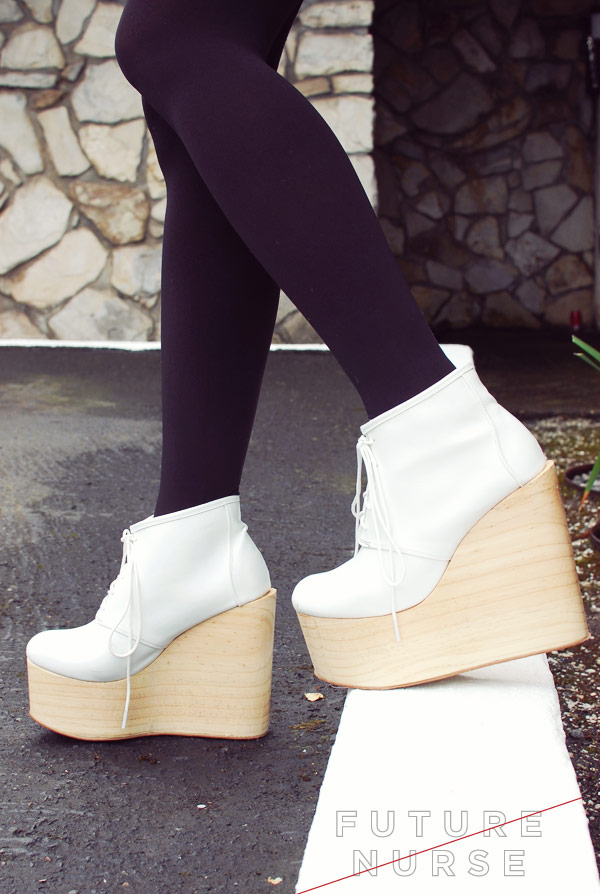 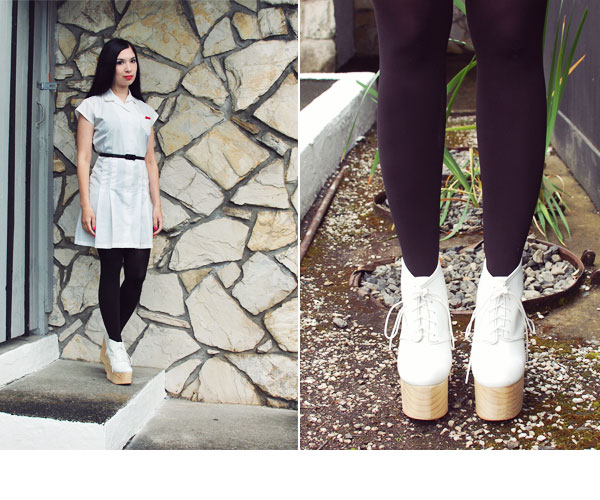 Readers: Do you have a daily uniform?
And, what item have you had in your closet the longest?