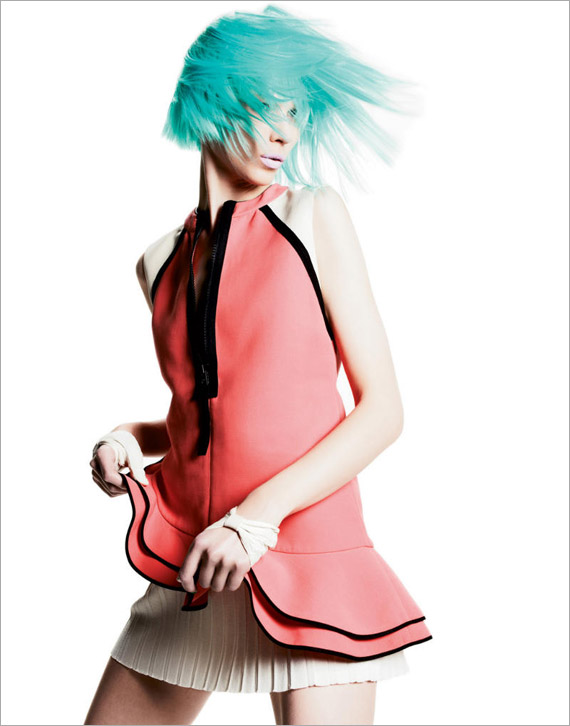 Photo by Gregory Harris for Interview, May 2011

â€¢Â Roseanne Barr talks to New York Magazine about the slippery slope of fame. Quite memorably, she says, “During the recent and overly publicized breakdown of Charlie Sheen, I was repeatedly contacted by the media and asked to comment, as it was assumed that I know a thing or two about starring on a sitcom, fighting with producers, nasty divorces, public meltdowns, and bombing through a live comedy tour.”

â€¢Â A list of words that you shouldn’t use.

â€¢Â Carine Roitfeld sits down and opens up about her life post-Vogue Paris over a three hour lunch at a Russian restaurant.

â€¢Â Gala fills us in on fold-up bikes and riding through the madness that is Manhattan.

â€¢Â Was Back To The Future meant to be a period piece?

â€¢Â A fascinating look inside the life of Huguette Clark: she was born into one of the richest New York families and could have easily taken the path of a socialite but instead died at 104 years old after decades in seclusion. Since the 1980s, she’d chosen to live in a hospital instead of one of her massive residences.

â€¢Â These days, calling your granny ‘Grandma’ just won’t do. Um, try referring to her as GlamMa instead.

â€¢Â Alicia from Sea of Ghosts just received the GHST RDR skirt and it looks awesome!

â€¢Â Just in case you’ve ever wondered what an autopsy on a mermaid looks like.

â€¢Â Iceland really wants you to pay it a visit.

â€¢Â Though Oprah’s style has changed quite often over the last 25 years, Stedman has remained pretty much the same.