A Beginner’s Guide to Paris

In February, I had my first ever Parisian experience and I thought it would be helpful to share what I learned along the way. When you’re traveling into unknown territory for the first time, it’s easy to make assumptions based on your past experiences. No matter how many guide books you read, there are always little surprises. Keep an open mind â€” cultures as a whole are in perpetual motion and experiences vary so widely that no book can accurately sum up what to expect.

So without further ado, when in Paris:

1. It’s okay to not be fluent in French but knowing a few basics will get you far.

I am terrible at French. Between Gala and guidebooks, I was able to pick up the absolute necessities including Bonjour (Good morning / good day), Salut (Hello), Merci (thank you), Au revoir (goodbye), and most importantly, Parlez-vous anglais? (Do you speak English?). What I quickly realized is that if you are friendly and make an effort to greet the French in their native language, then follow up with Parlez-vous anglais?, most citizens will quickly gather that you’re an American and switch over to speaking English.

2. The old stereotype that the French are rude and unhelpful is not necessarily true.

Before visiting France, I was warned by other Americans that the French might be off-putting. I was prepared for the worst but found the exact opposite to be true. People in the street stopped and assisted us with directions. Shopkeepers smiled and were more than helpful. Waiters took the time to answer our questions about items on the menu. I can honestly say that I didn’t have a single negative experience.

I think that our experience was directly related to the image that we projected: we dressed up, were polite, tried to address everyone in French and demonstrated an overall appreciation of the French culture. If you show up in khaki shorts and dirty sneakers, are loud and obnoxious and don’t make any effort to speak French, you probably will be met by cold, sneering attitudes. And really, you’d have only yourself to blame.

3. If you want to blend in, dress simply and wear mostly black.

I had an image of how the French would dress and well….I was wrong. I arrived in Paris sporting my Rick Owens jacket, Wolford Bondage tights and sky-high wedges only to realize that the French are much more conservative. Perhaps I would be dressed to blend in if it was 2050. Parisians are much better put together than Americans overall, yet never come across as gaudy or too done up. They are chic in a classic, understated way. Wardrobes I saw on the street and in the shops were mostly black and gray with the occasional burst of red. 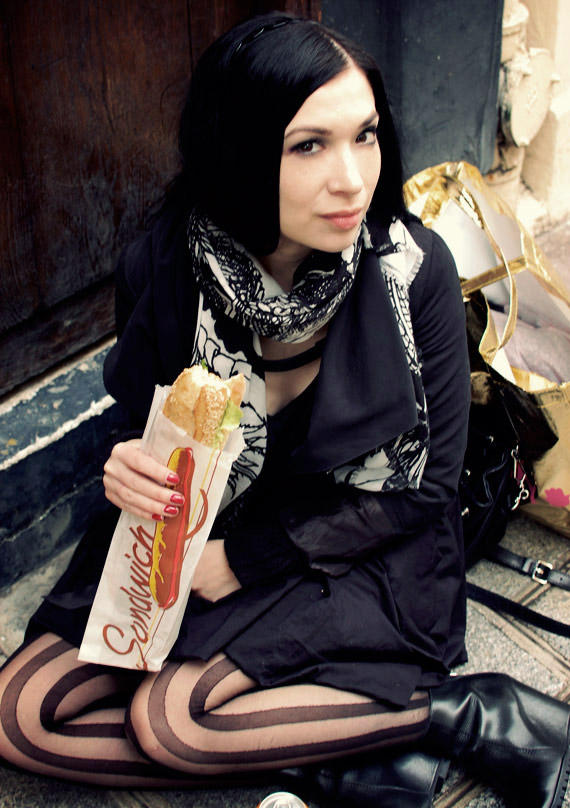 4. It is not usually acceptable to eat on the street.

In America, we are used to eating on the go. Time is money and wasted time is considered the bane of our existence. In Paris, the pace of life is much slower. Food and coffee are meant to be enjoyed. Always take the time to sit down at a cafÃ© whenever possible and avoid stuffing your face in public. There is a wave of change slowly rippling through French society though, most notably through the influx of Starbucks. As is customary in America, coffee is prepared in to-go cups.

Note: sometimes, avoiding eating in public just isn’t possible. When Gala and I got sandwiches to go at a cafÃ© one day, there were 20+ empty tables yet they were all reserved. In the end, we were forced to sit in a doorway in an alley to eat lunch. Not so classy. 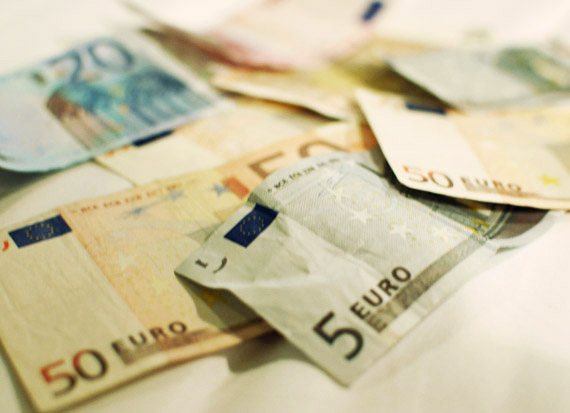 Not every business (especially small shops and cafÃ©s off the main thoroughfare) accepts credit cards. Even if they do, be prepared to have an additional 1% to 3% foreign service charge tacked onto the total by your bank.

Have a pair of footwear on hand that is tried-and-true, something that you can easily walk a few miles in without any issues. Paris is HUGE. And with arrondissements (neighborhoods) totaling 20, expect to do a ton of walking. This isn’t New York where a cab happens to be on every corner; you must be self-sufficient.

7. In restaurants, asking for a ‘doggie bag’ of your leftovers is uncommon.

Eat what you can. Nothing more, nothing less. If you ask for your leftovers to go, chances are that the waiter won’t understand what you mean â€” this is the exact opposite of America, where if you don’t want your scraps to go, the waiter thinks you didn’t enjoy your meal. 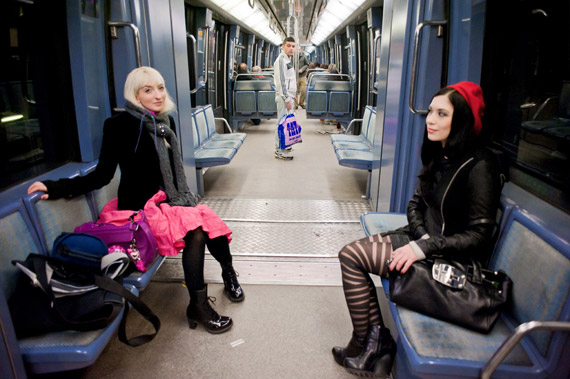 8. Don’t be intimidated by the Metro.

The Metro is very inexpensive, costing less than two Euros to ride. The ticket machines have an English language option and the lines are not only clearly labeled but also color coded. After my first few times, the whole process felt downright easy. If you get lost, most of the counter attendants speak English. 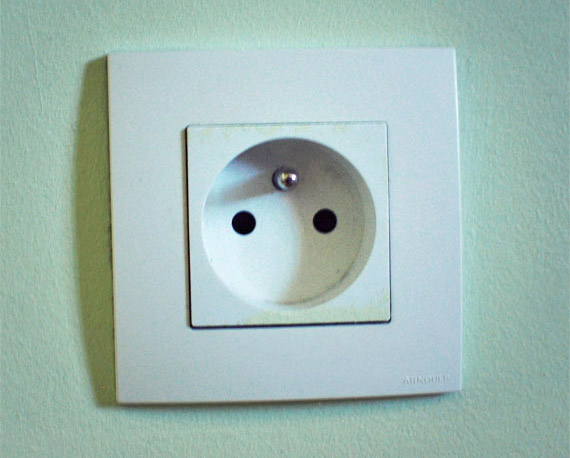 Before I left, I bought a plug-in converter for about $10.00 so that I could use my laptop, straightening iron, etc. overseas. Most of Europe runs on the same converter.

We walked miles a day throughout various neighborhoods and felt very safe. The only time any issues arose were when we visited popular tourist destinations. Two men approached us at the Arc de Triomph and forcefully asked to see our cameras, a woman tried to pull a ‘gold ring trick’ while we were in a popular, highly trafficked shopping area and finally, a man tried to stop us at the Eiffel Tower. These are all places you’d expect to be hassled. While in these areas, I made sure that my purse was locked and crossed over my body and kept my camera tucked away as much as possible. Use common sense and chances are that you’ll avoid the good ol’ pick-pocket.

Remember that you can’t just turn on your phone halfway across the world and expect it to work. Clearly write down your hotel name and address as well as any other destinations you may need â€” a taxi driver can usually read the information and safely get you to your destination. A basic map is a necessity. And remember, internet connections overseas can be ridiculously slow. 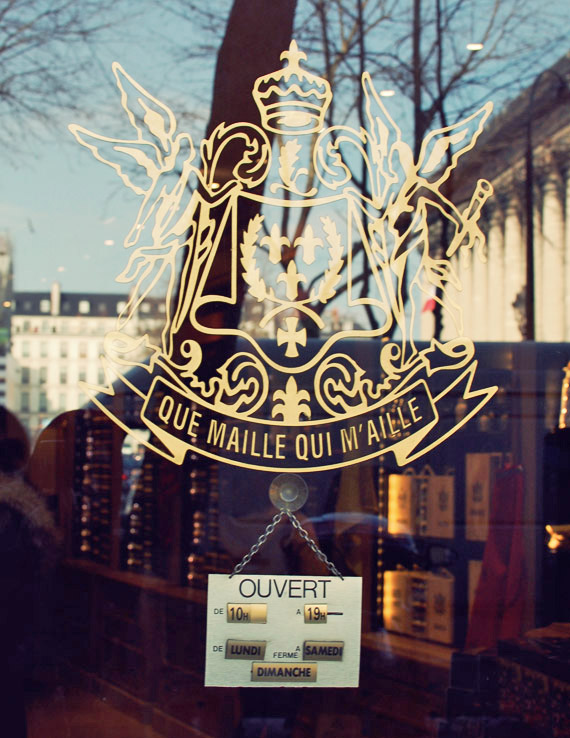 Parisian shopkeepers are not on duty to cater to your every whim. Without warning, they may deem a three hour lunch completely necessary. Don’t expect set hours ever, especially for small shops. On Sundays, most businesses are closed. Gala and I arrived in Paris on a Sunday and the cafÃ©s that were open were packed. We finally gave up hope and went to bed with only cookies and chips to eat.

13. If you have any special dietary needs, don’t expect them to be fulfilled.

If you don’t like dressings, strong mustards, can’t eat meat and loathe strong coffee, you may suffer. Many French menus I encountered contained meat in nearly every entree. Overall, expect to take in an astounding amount of cheese and bread.

Planning to travel to Paris is just like anywhere else: keep an open mind, be aware of your surroundings, avoid being too picky, greet Parisians in their native language and show a willingness to adapt. It’s really quite easy to acclimate and to have an amazing time, you just have to be willing. Au revoir and happy travels!

4 Responses to A Beginner’s Guide to Paris