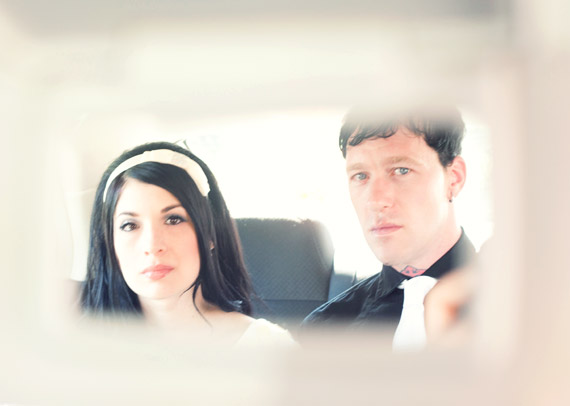 Though I try my best to keep my blog updated regularly, realistically it probably only covers 10% of my life. I’m one of those people that’s always strived to keep my online life and everyday life separate â€”Â of course there’s always going to be some crossover but I believe that you’ve got to make sure that first and foremost, things are right in real life…because when you turn off your computer, that’s what really matters.

Now, onto some big news I have to share with you. Back in September, Joey and I got hitched! Most of my close friends and family have known for months and I’ve been meaning to make an announcement for quite some time. I’m not one to make excuses but to say that time got away from me is a huge understatement. See, I didn’t take any time off to plan and the day after we got home, I went back to work. Over the last six months, I’ve not only been updating the blog and keeping up with an expanding list of clients but on top of that, I’ve been freelancing at local ad agencies full-time. With so much going on, just the thought of putting this post together left me feeling completely overwhelmed. So I waited. And waited. And now…It’s December?! Really?! So here it is. No more excuses! 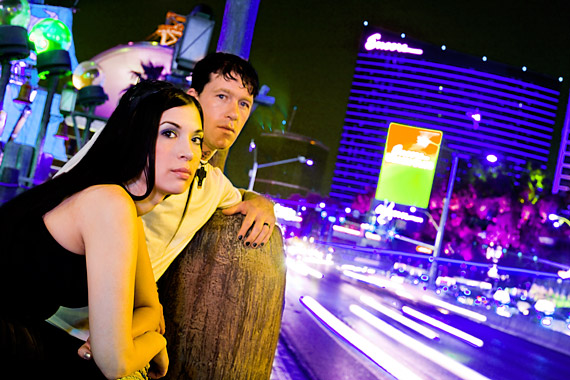 Let’s back up to last December. The last week of the year is known to be notoriously slow in the design world. I was actually sitting around at my dad’s house close to this day, working on the revamp of my corporate identity, thinking about what kind of goals I wanted to set for 2010. At the same time, I was scrolling through Facebook and noticed an update from Joey. We’d actually been acquaintances for years but I didn’t know him super well. I’d been trying to branch out and make more friends so I thought, “What the hell. I’ve got nothing to lose. Maybe I’ll see what he’s up to.” I think we literally hung out five times in the following weeks and quickly realized that we were going to be more than friends. It all happened so fast that I jokingly referred to Joey & Rocky as my ‘starter family!’ It was like, “Where did you two come from?!!” Though I’ve never considered myself the marrying type, something felt different. It just felt right. Sometimes you just have to trust your gut.

I’ve always dreaded the idea of a big traditional wedding. I can’t stand diamonds, gold, most flower arrangements, long, flowing dresses and the thought of being in front of a huge crowd makes my stomach turn. It’s just not my thing. I didn’t want the extra stress or to go into a huge amount of debt. So, we decided that Vegas was the answer. 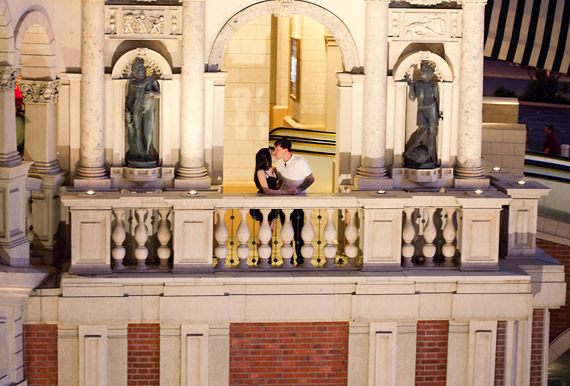 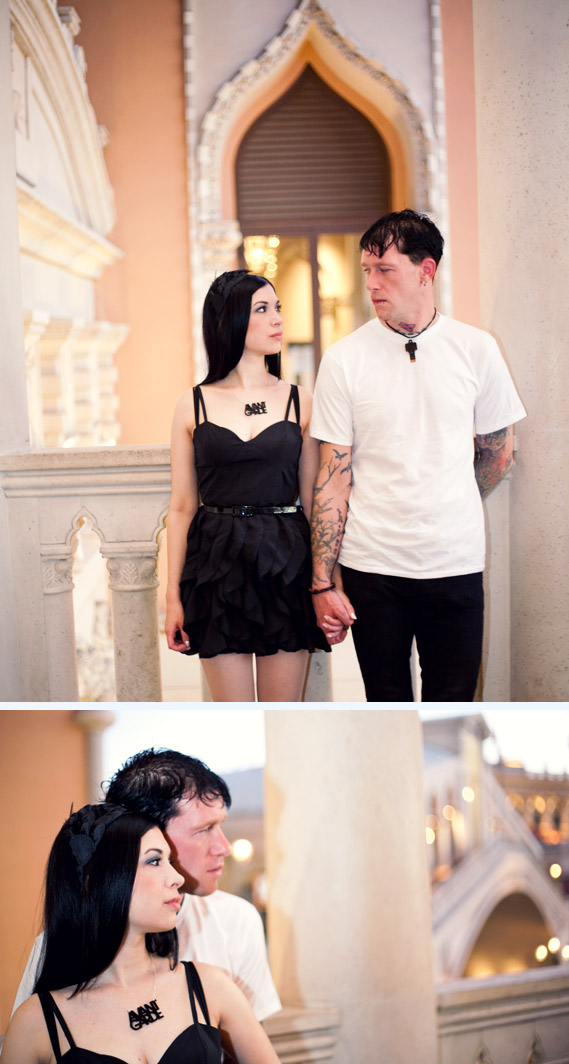 Onto Vegas â€”Â Bianca and I flew in from New York, Joey flew in from Portland and we got to work. On our first night, we shot pre-wedding. I wore head-to-toe black to contrast the head-to-toe white I’d be wearing the next day. We kept it simple, shooting around The Venetian. 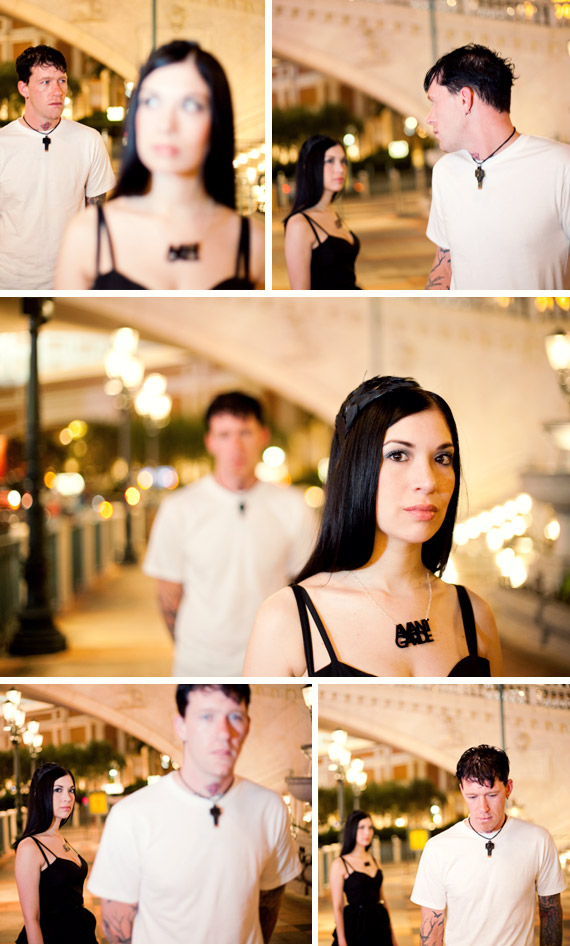 I think we were finished with pre-wedding in about an hour. Bianca was a pro at directing, working quickly and getting the shots we needed. 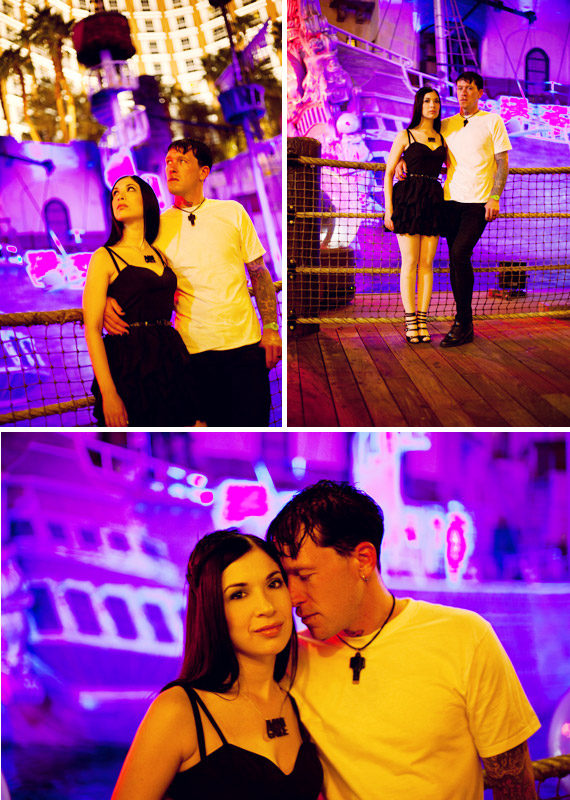 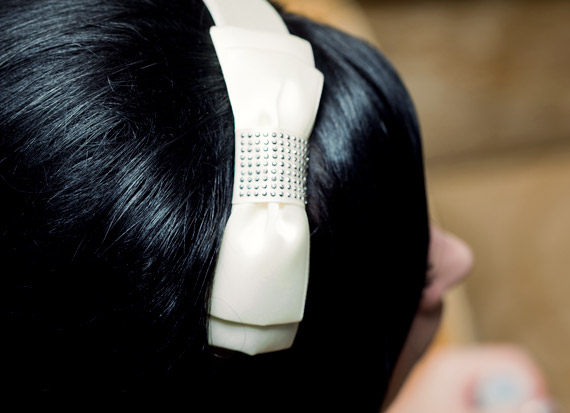 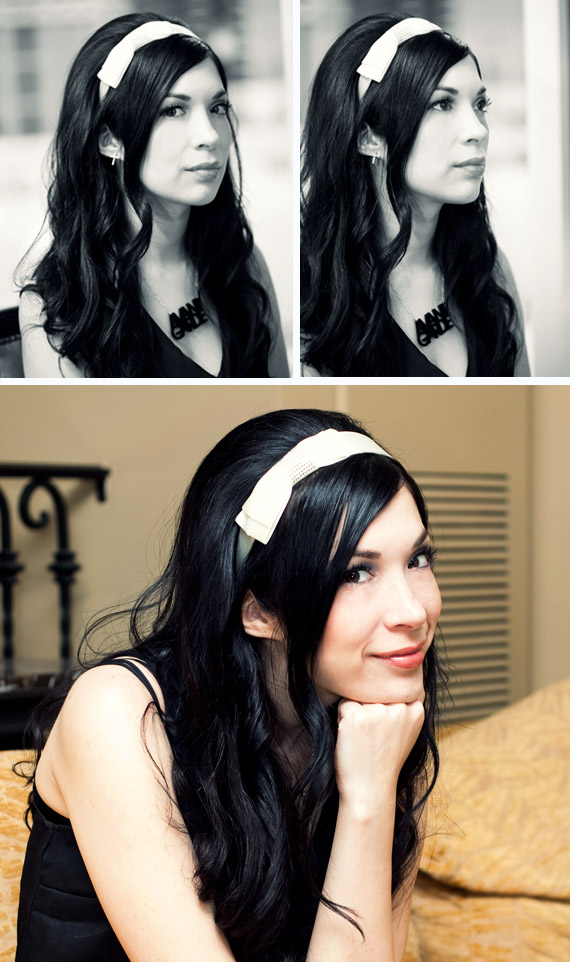 The day of was super busy. I had my hair professionally styled for the first time ever. My inspiration was firmly 60s and my style icon for the day was Priscilla Presley. I love the way she looked with the dark back combed hair and smokey eye makeup when she married Elvis in Vegas. Bianca was staying next door so she came over and took photos as I pulled myself together. 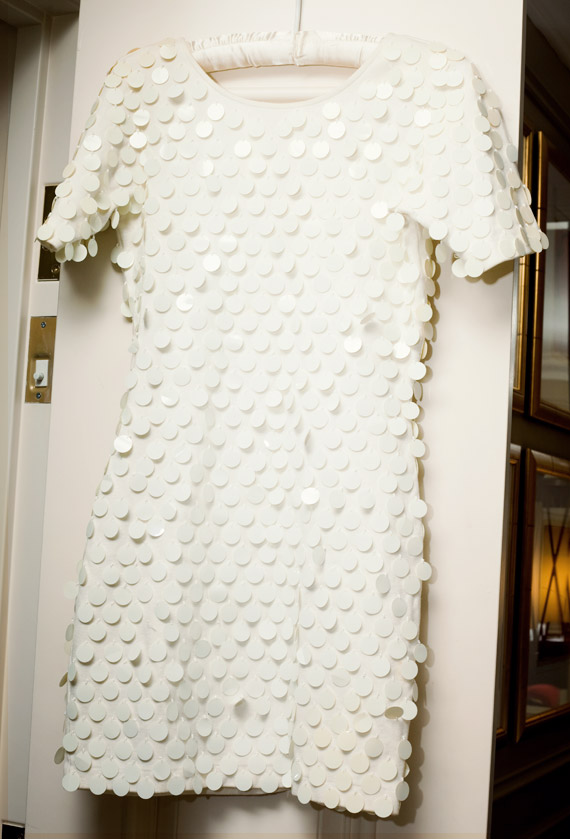 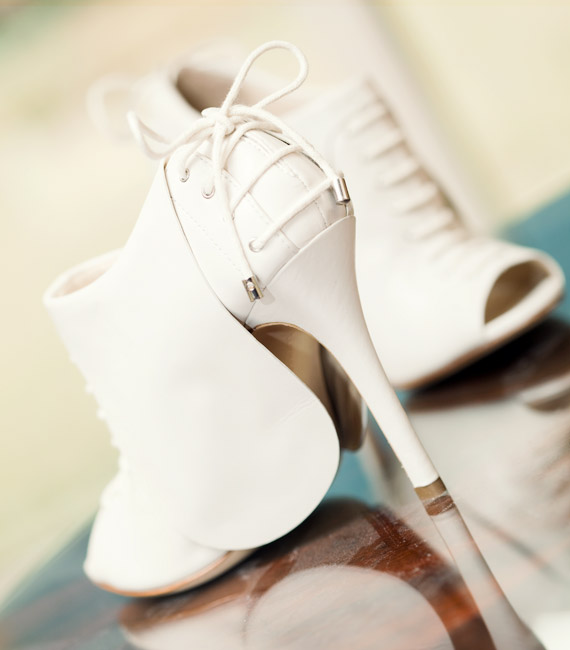 For me, investing in a dress that I could only wear once for a few hours felt ridiculous. I wanted something that I could move around in and that could be worn for future occasions. Gala helped me pick out my vintage 80s era dress on Etsy and it totaled less than $100. My mom helped me pick out the Camilla Skovgaard heels at an astounding 70% off. I think my total ensemble from head-to-toe was less than $300.00 (and I can use it all again). 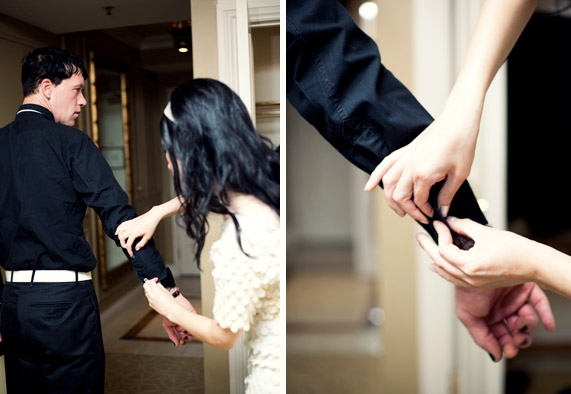 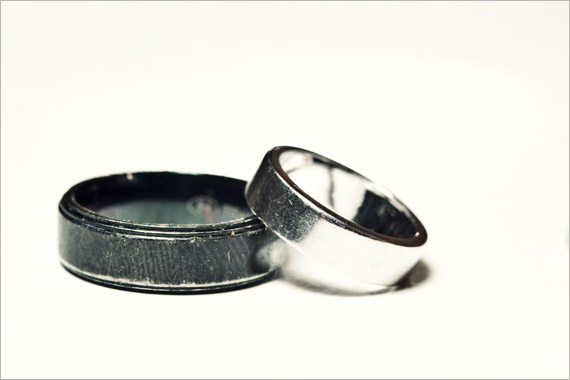 We’d already worn our rings for a few months by this point so they were broken in (or, scuffed.) 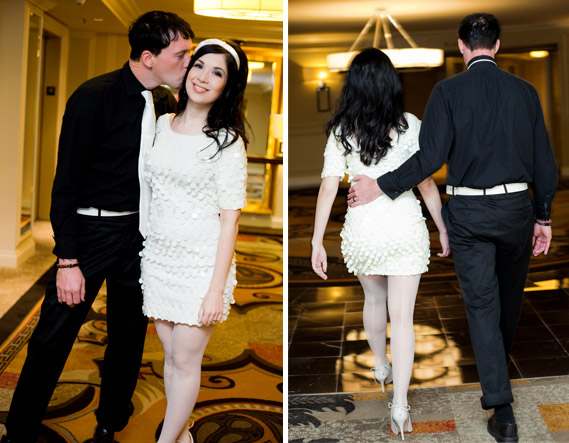 When we were walking down the hall, I was so nervous! I had that feeling of, “Okay, this is it!” 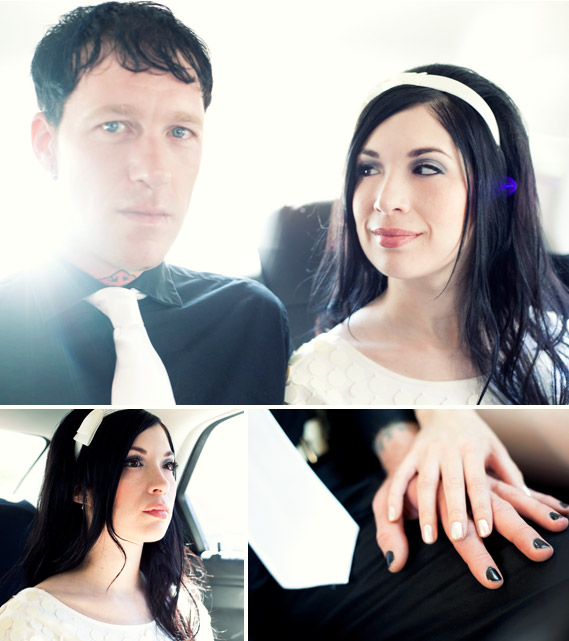 Once we were ready, we caught a cab to downtown Vegas. No limo for us! 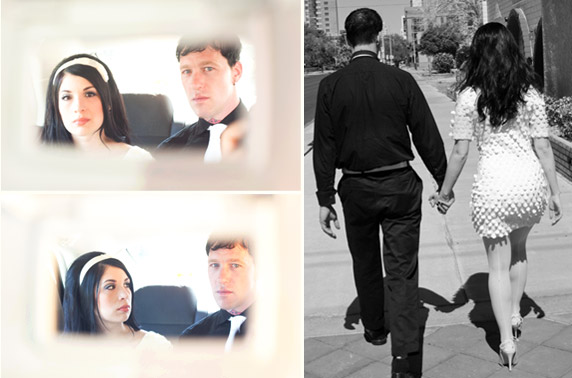 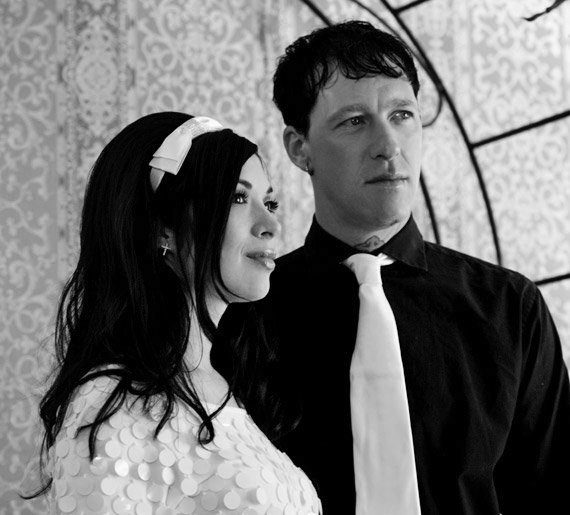 We got married at a cheap, flamboyant chapel complete with stained carpet and Christmas lights. It was beyond funny. The preacher was a dead ringer for Jon Gosselin and outfitted in a black polyester robe. Every time we made eye contact, I tried not to laugh. 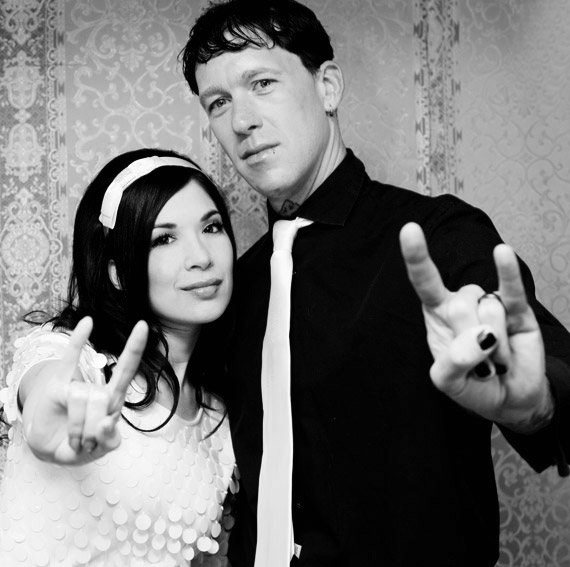 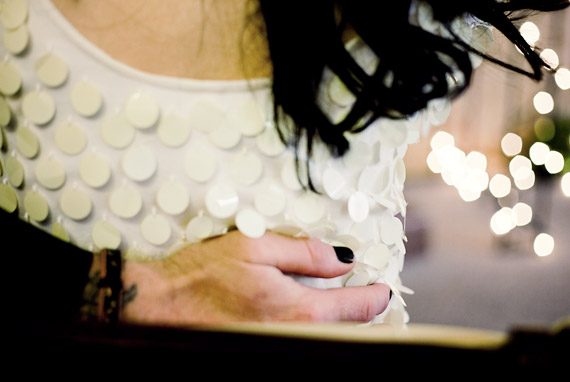 Everything went off without a hitch. It was time to party. 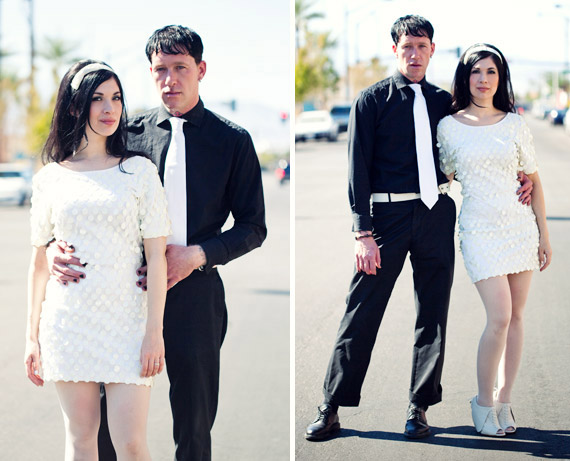 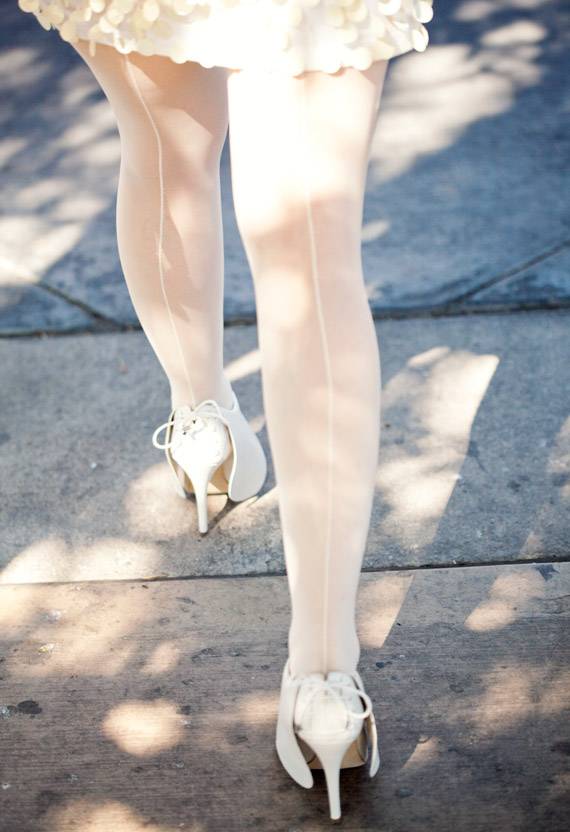 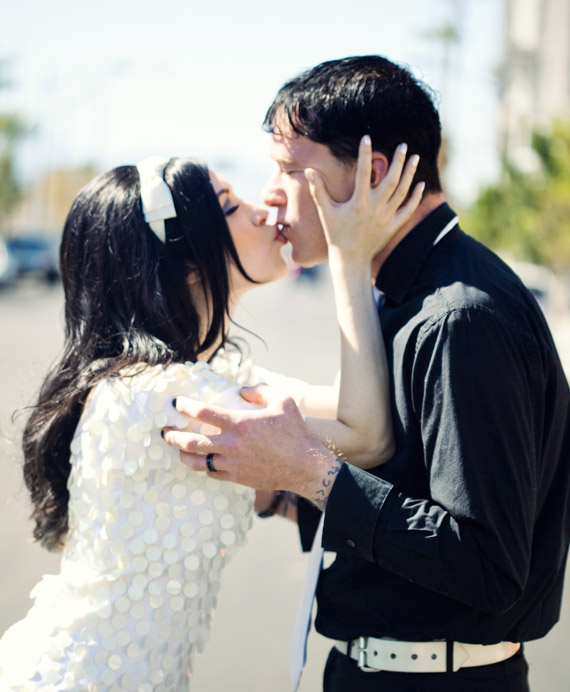 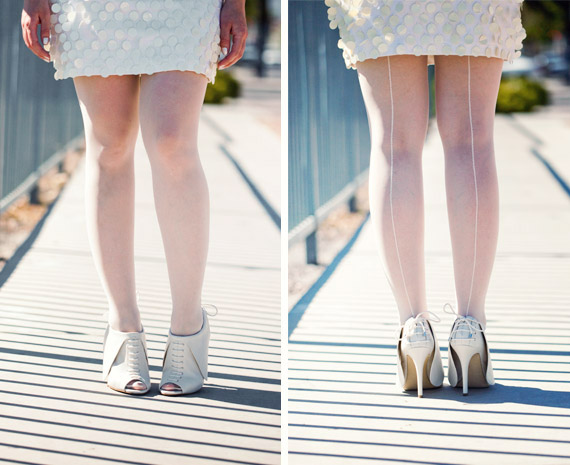 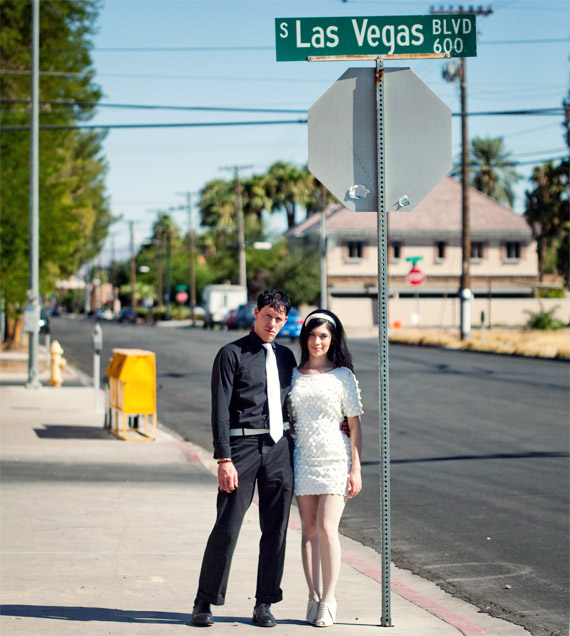 After the ceremony was over, we walked along Las Vegas Blvd, past a steady stream of pawn shops and bail bond places. When we couldn’t seem to catch a cab, Bianca called a car service. They asked her for a landmark and she calmly replied, “We’re standing in front of Xtreme Weed.” Haha. 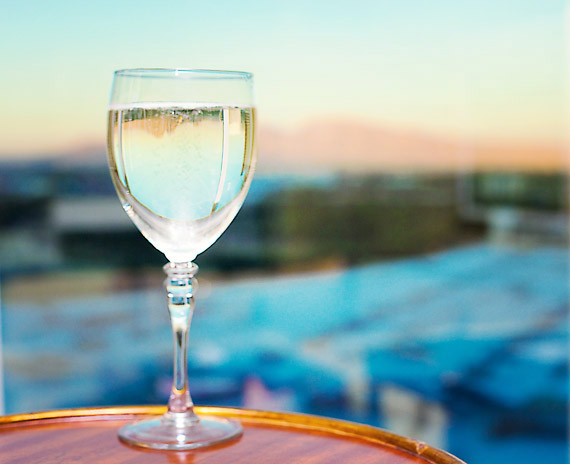 We got back to the hotel, changed into our swimsuits and hit the pool. There were no guests to entertain and no mess to clean up. It was awesome! 2010 has turned out to be the best year ever both personally and profesionally. I’m thankful that I found my perfect match when I least expected it. It’s funny how that happens! If you’ve made it this far, thanks for reading! 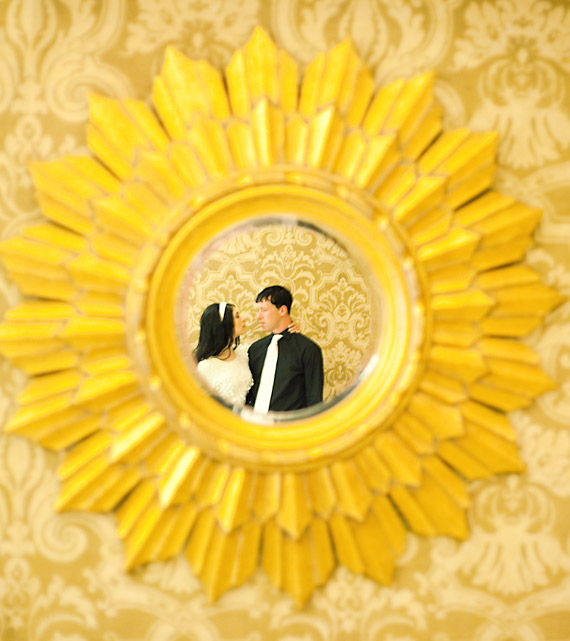