For me, 2010 was a monumental shift for both my personal life and career. 2009 closed with a surprise road trip, the murder at the mountain and meeting up with Joey for the first time. During that final week, little glimmers of hope started popping up after a really disappointing year. And, when the calendar flipped to January 1st, 2010, everything just continued to take off for the better.

A huge triumph this year revolved around making some serious progress with Wolfgang Manor. When my brother & I bought the house during the Summer of 2009, it was in need of a serious overhaul. In the last year, we set up a fabulous all white dining room, bought our first ever set of matching dishes, painted the living room black (and then white), started renovating the basement, began framing in the gazebo in our back yard (by the time next Summer rolls around, we hope to have a workspace / bar), installed a fence all the way around the property, finished my office and perhaps the coolest of all, Joey is remodeling one of our attic spaces and transforming it into an all-white studio! 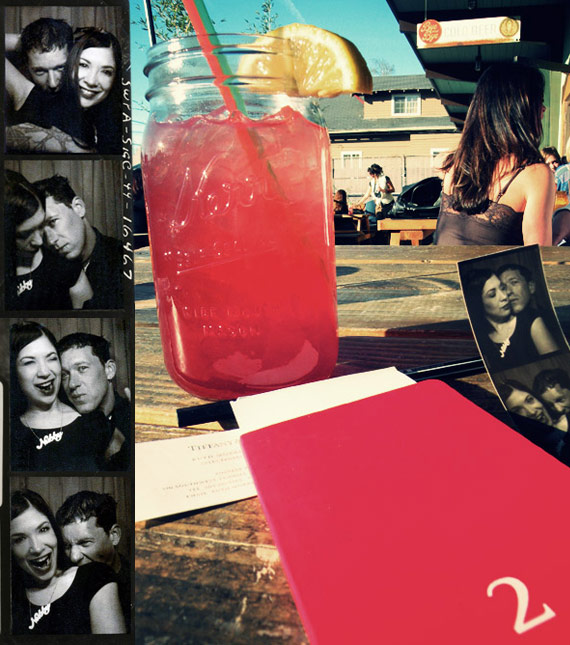 As Joey and I got to know each other better, we realized very quickly that we were going to be much more than friends. Everything happened super fast but it just felt right. I used to question whether it was possible to ‘have it all’ since I am so focused on my career but now I know for a fact that it is. 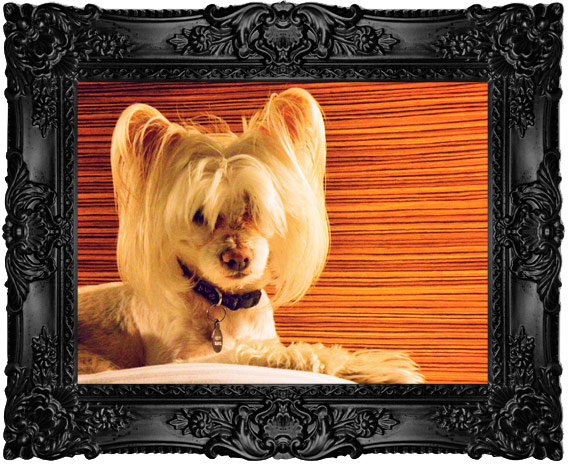 With Joey came Rocky. How could you not love this beauty?! I love waking up next to that white mop of hair every morning!

Professionally, I was super busy, making the rounds between four agencies as well as spending a month at Nike. Towards the end of the year, I worked really hard on Adidas-related projects and learned so much about print production. Personally, I worked on hugely rewarding jobs for Solestruck, Semiospectacle, Veronica Varlow, Molly Crabapple, Sweet Caroline and more. And, to my surprise (and delight!) I was featured in a Swatch Campaign for Pop Magazine, a Solestruck campaign and the NYU Student Newspaper. Thanks to everyone who reached out and believed in me. 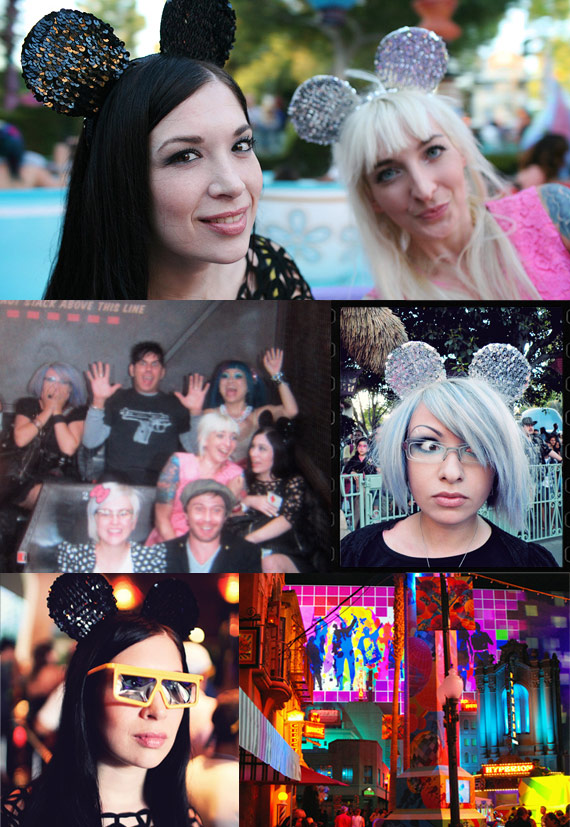 Though I tend to travel a lot, due to the frantic pace of freelance and Joey & Rocky moving in, I didn’t take a vacation until August. Though, I made up for lost time by joining forces with Gala, Amy & Kevin and Zo to visit Disneyland. Between hilariously gloomy fortunes, super fast spins on the teacups, a viewing of Captain EO, the death-defying drop on the Tower of Terror and ending up in the middle of an otherworldly rave, it did not disappoint. LA always delivers and bunking with Gala at The Palihouse Holloway made the trip pretty much perfect. 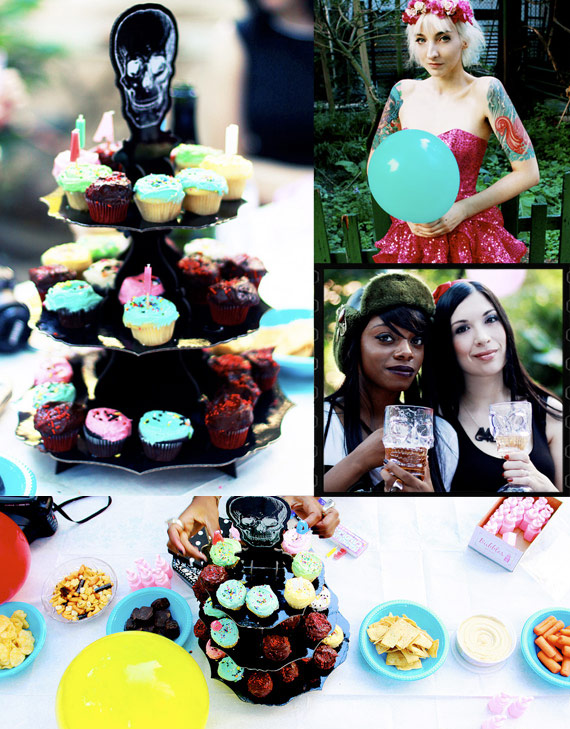 After a short break, I flew to New York for birthday celebrations with Gala. We took over the corner of a private garden in the East Village, hung up a disco ball, set out a dizzying assortment of candy-colored treats, invited our nearest and dearest (including Eliza, Jazzi and Kristin) and spent the afternoon sipping drinks out of skull goblets. (Photos by Chloe Rice). 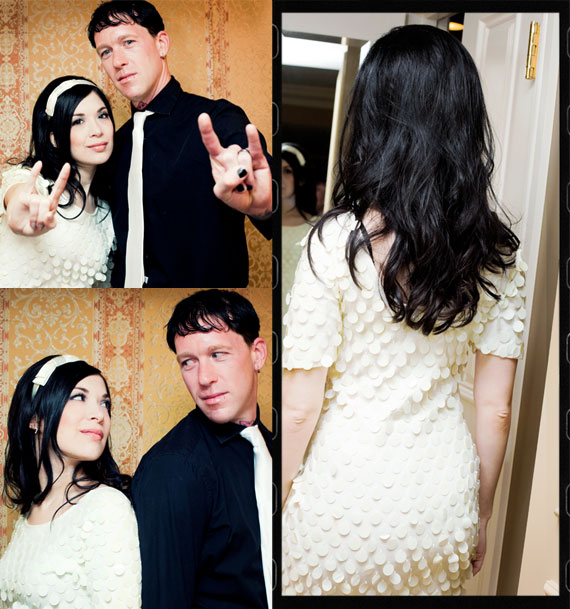 After a week in New York spent goofing off, Bianca accompanied me to Vegas where we met up with Joey. The next day, I got married in a vintage dress that Gala had helped me pick out on Etsy. It was a total whirlwind but I wouldn’t change a thing. Joey & I specifically planned for the date to fall between our birthdays (both are in September) so that we can celebrate them, along with our anniversary all at once with a new getaway every year. We did it our way: low-key and simple without a guest list or caterer in sight (and I am so happy that we did). 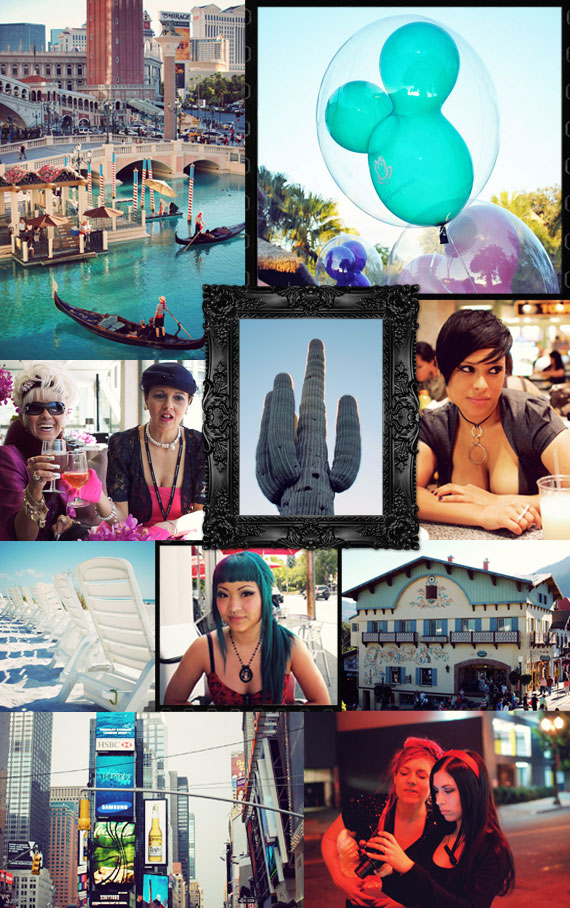 Traveling is one of my favorite pastimes; switching up my routine helps me feel inspired. This year, I visited LA in August, New York City, Las Vegas and Leavenworth in September, Orlando and Sarasota in October and Phoenix in December. In the process, I was gifted a sparkly gnome, went to a reality show pitch, sat on multiple beaches, had the chance to visit both Disneyland and Disney World for the second year in a row and relished the chance to expand my horizons and to remember that there’s still so much of the world left to see. 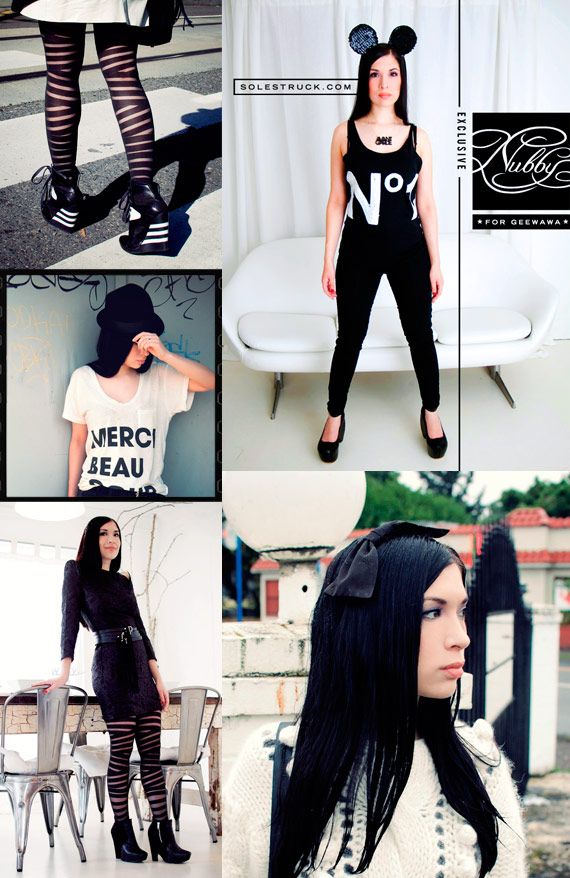 Over the course of 2010, I felt like I hit my stride with personal style goals (while documenting what I was wearing on a near-weekly basis). For the most part, I developed my ‘signatures’ including type-based jewelry, black and white graphic tees, dashes of sequins, wedges, a steady dose of sleek black silhouettes, edgy stripes (and the occasional pair of mouse ears). Towards the end of the year, I formulated a newfound style direction, Parisian Cyborg.

All in all, 2010 shaped up to be one fast-paced, magical year that reminded me how good it feels to be alive, living in the moment. Due to the topsy-turvy nature of 2009, I didn’t set any goals but was pleasantly surprised at how wonderful everything turned out. Now is a good time to settle in and take inventory of what worked, what didn’t and what we can improve on for 2011. It’s the perfect time for setting new goals, establishing a plan and investing in a new planner / calendar (I just picked up a new Moleskine).

I’m going to take a little break and play catch-up before the new year begins and will be returning January 3rd. Here’s to a magical and productive 2011! 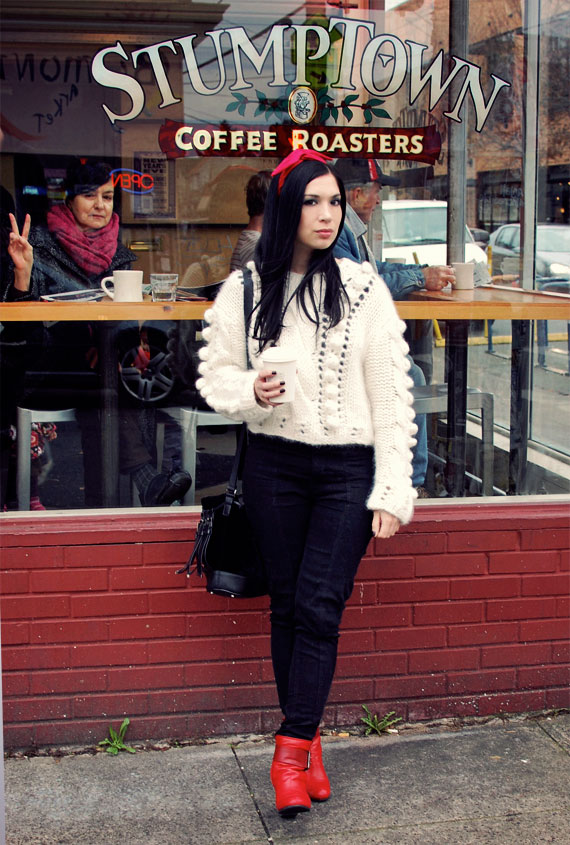 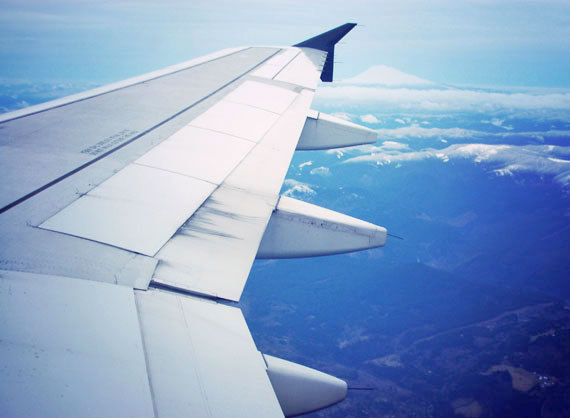 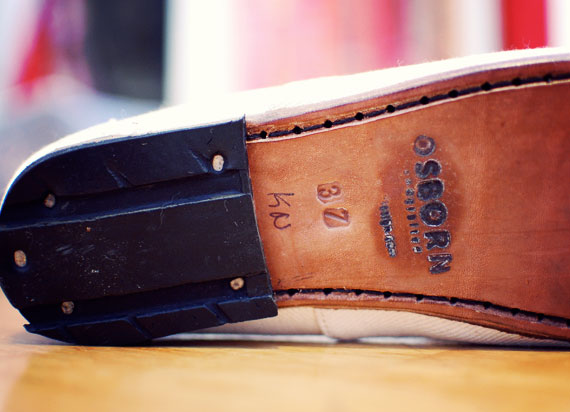 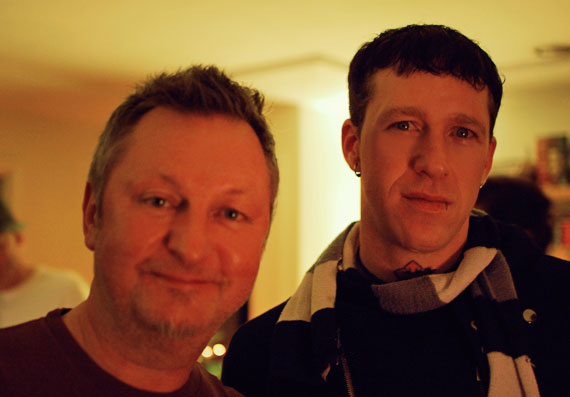 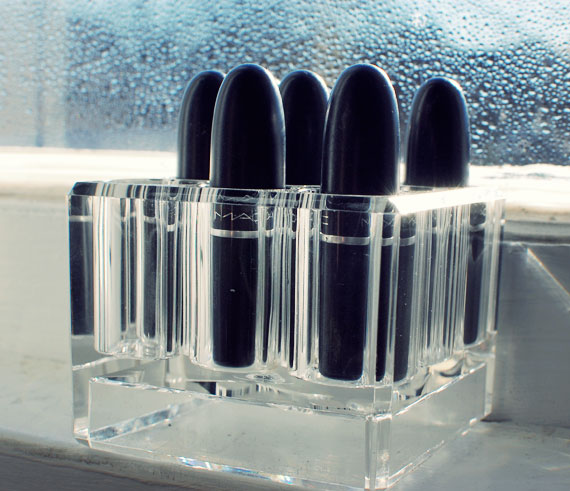 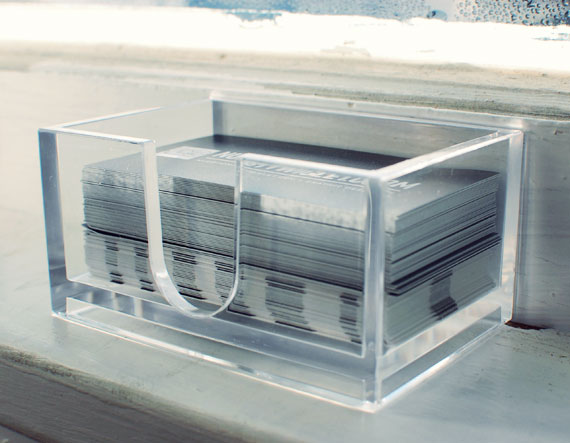 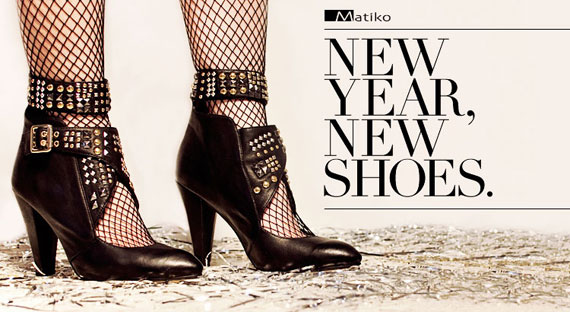 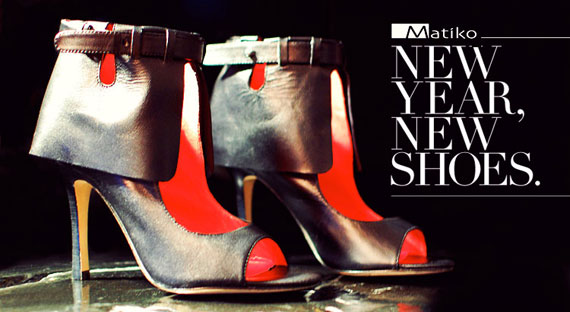 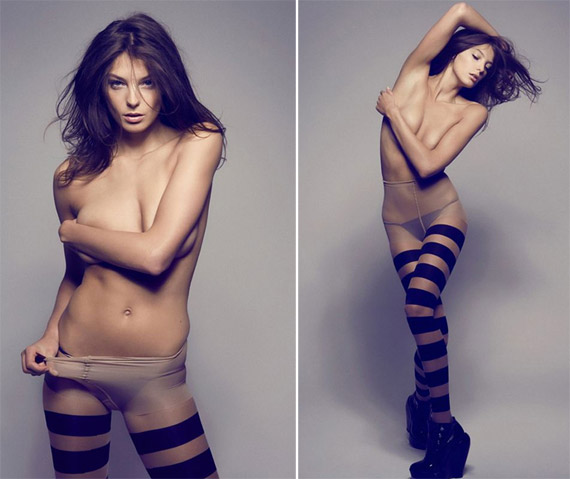 â€¢ If you click on only one link this week, Let it Dough over at the New York Times is a must. It will make you smile, I promise!

â€¢ Design firm Baker, which has been around since 1981 just redesigned their identity and lets us in on their creative process.

â€¢ E-Commerce Copywriting teaches you how to make your products more desirable and is super in-depth.

â€¢ Panda handlers in China dress up in panda suits so that they don’t spook the cubs! (via rachel hills)

â€¢ Fashion Gone RisquÃ© in 2010 documents the riskiest, most provocative shoots this year (NSFW). And then, the best retro fashion spreads are covered in Fashion Gone Retro.

â€¢ Kevin Smith shares his secret to success: “The secret to a successful life is hardly a secret; it requires you to be â€¨â€¨self-centered as all fuck, is all. So long as itâ€™s not at the expense of others, make yourself the center of your universe. You only get to do this ONCE, so try to take as much stress out of the process as you can.”

â€¢ Brand New shares some of the worst identities of 2010.

â€¢ Actor Randy Quaid has completely lost his mind, for real. Vanity Fair says, “Theyâ€™re spending nights in their car, on the run from the same shadowy cabalâ€”â€œthe Hollywood Star Whackersâ€â€”who may have killed Heath Ledger, possibly sabotaged Jeremy Piven, and could now be targeting Lindsay Lohan. No, this is not the plot of Oscar nominee and Golden Globe winner Randy Quaidâ€™s latest movie. It is what he and his wife, Evi, swear is really happening to them.”

â€¢ Caught Between Fat and Thin is the story of a fat acceptance advocate who decided to lose weight. (via rachel hills)

â€¢ Of course I love the Santa Brand Book. 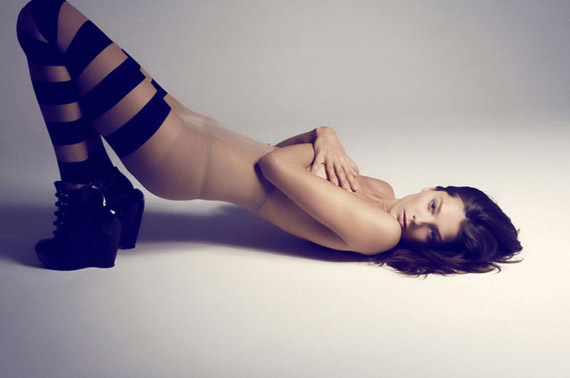 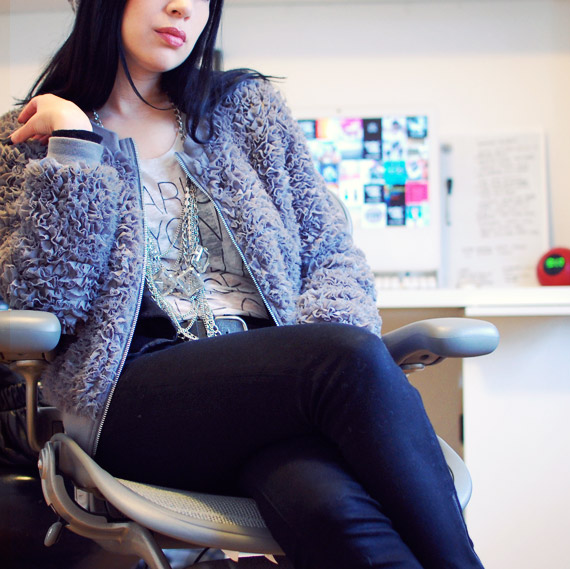 Over this last weekend, it occurred to me that I’ve never taken outfit photos sitting at my desk. When I’m home, this is where I spend the majority of my time â€” it’s my so-called natural habitat! This outfit is representative of my basic daily attire when I have nowhere special to be. On those days, I want to be comfortable and warm but still feel pulled together. 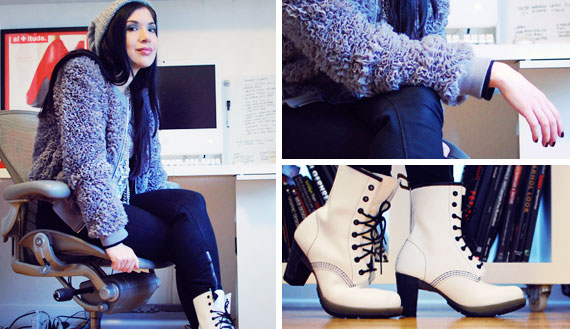 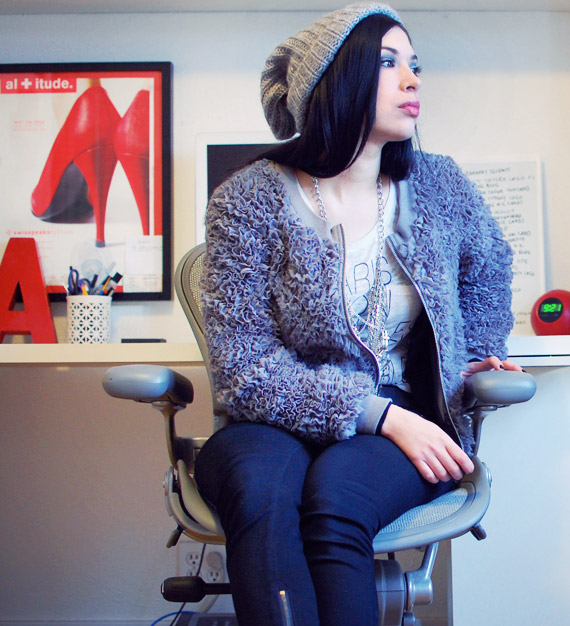 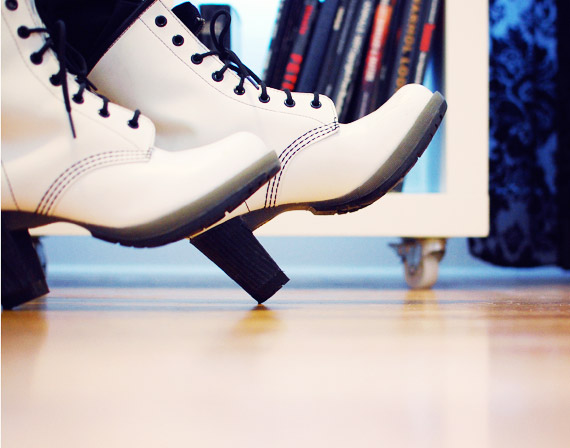 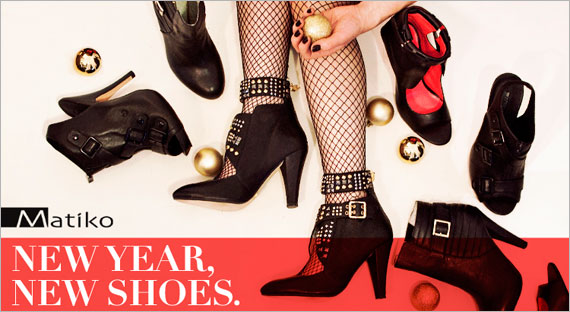 This afternoon, I got a message from Bianca asking, “Are those your feet on the Solestruck blog?” Why yes they are â€” now you know how I spent my Sunday afternoon!

I hadn’t tried on any Matiko styles in the past but once I did on Sunday, I was sold. The studded pair were my favorites of the bunch. Not only did they have a stable heel and a fair amount of cushion but they were also fully lined in leather and had gorgeous gold zippers up the back.

If you like the styles featured on my feet, you’re in luck! Enter the Matiko: Party Like It’s 2011 Shoe Giveaway over at Solestruck’s blog and start your year off in style!