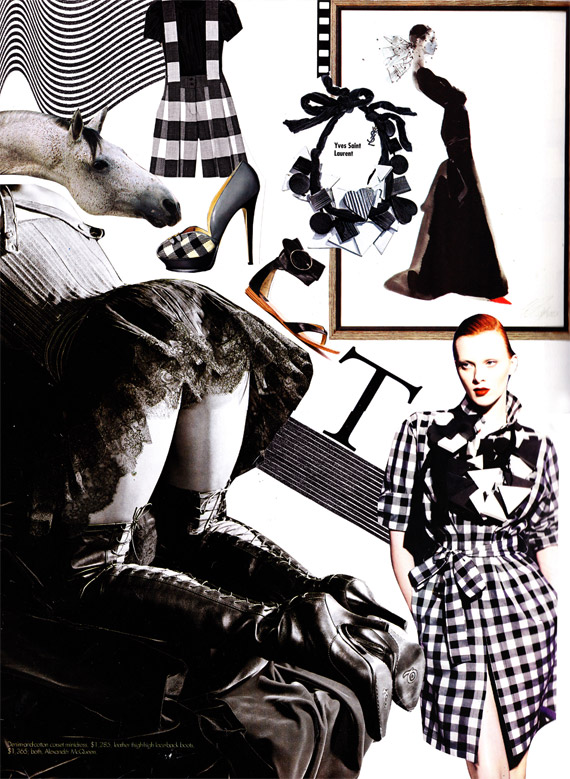 This is one of my favorite pages â€” I think that a few of the checked pieces are YSL from a few years back. I went crazy for that collection when it came out and subsequently bought some Forever 21 dresses in that pattern. Those lace-up boots are by McQueen. So amazing! View the full Fashion Notebook set on Flickr. 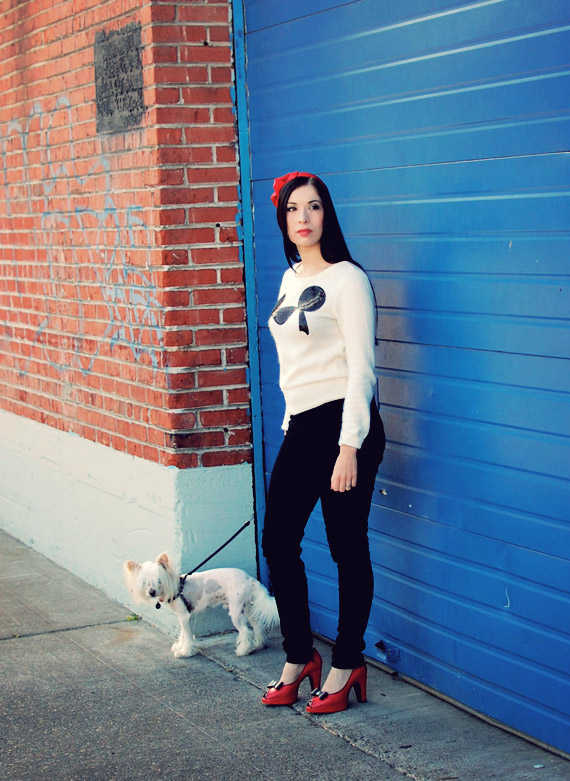 I think I’ve always secretly dreamed of being a Mouseketeer. Though, no matter your job, it’s nice to take a little break. If I was indeed a Mouseketeer, this would be my weekend uniform. Prim yet casual with a few whimsical touches to remind people of my very important job title. 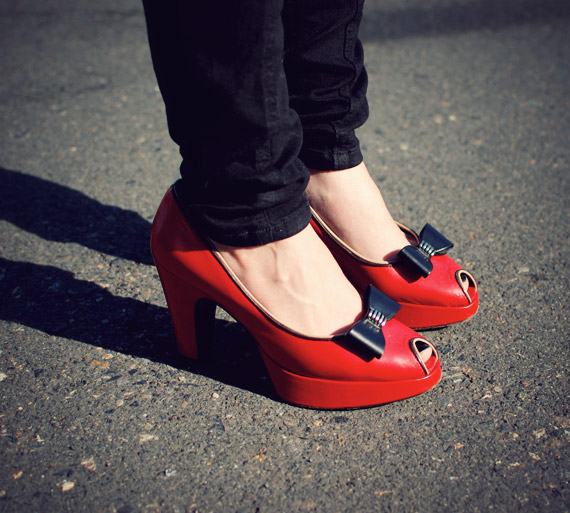 When my mom was in town, we wandered into a little vintage boutique and I noticed these shoe clips in the display case for $10.00. I’ve never owned a pair, but my mind started racing, thinking about how I could simply clip on these little bows and transform what was already in my closet. 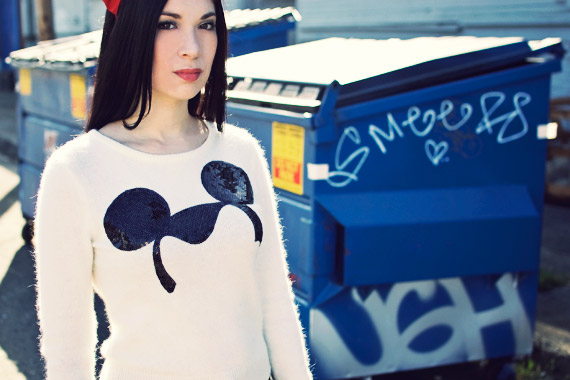 Okay, now onto the sweater. When I met up with Gala in LA, she waltzed into the hotel room with an H&M bag and proceeded to pull out this sweater. I was completely speechless. H&M? Really?!! Mouse ears and sequins are an easy sell for me! I tracked one down the next day for myself. 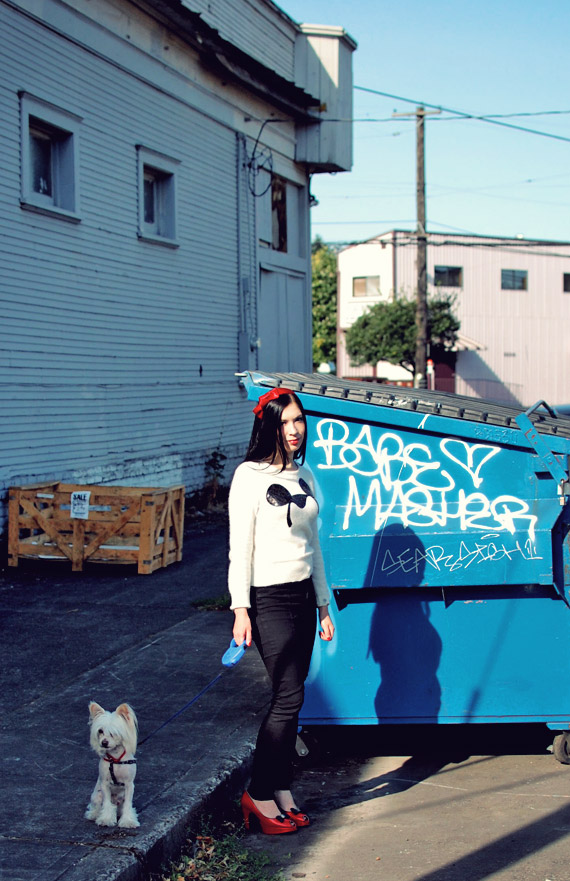 The graffiti on that dumpster behind me reads BABE MASHER. Haha. Where do people come up with these tags?? 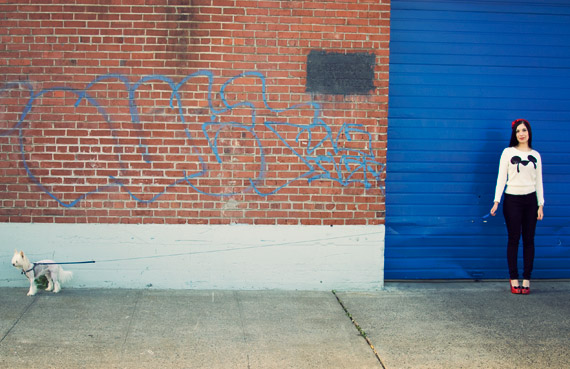 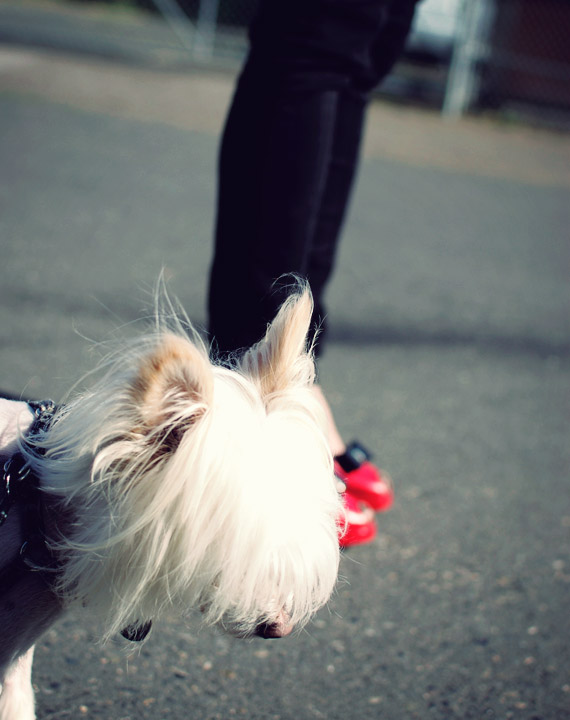 Someone is always stealing the show. I’m not naming names or anything! 😉 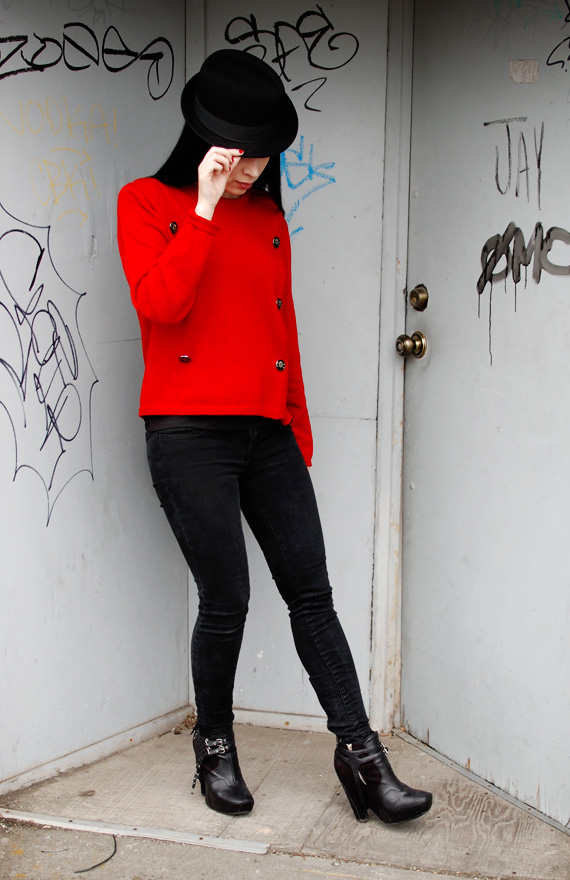 Today wouldn’t be complete without a little shout-out to my all-time favorite Virgo, Michael Jackson. It goes without saying that his influence and legacy will live on forever. I remember when I used to show up to my first agency job and the boys would say, “You look like Michael Jackson!” Ha. I thanked them for the compliment! I guess I’ve just always been drawn to his tough, military-influenced style. Virgos tend to put up walls and to be very private â€”Â we have our public and private selves. Michael, through all the health issues and adversity, kept his head held high and never complained. Because he never over-shared, the media felt the need to dig deeper. In reality, we should be grateful that he shared as much as he did with us and gave back so much. Happy birthday, MJ! 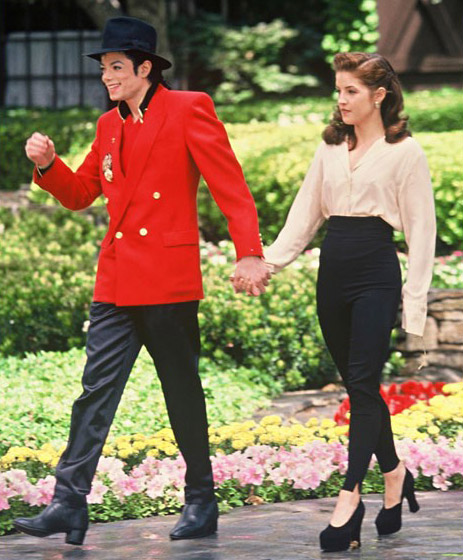 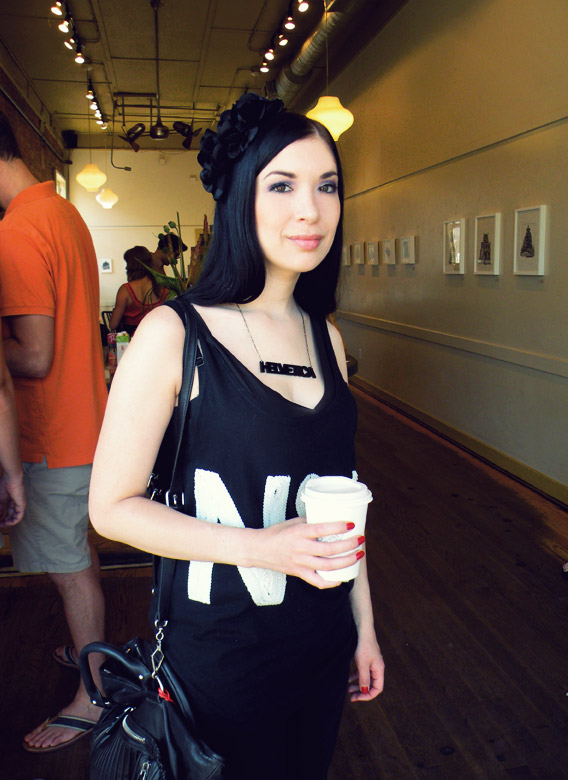 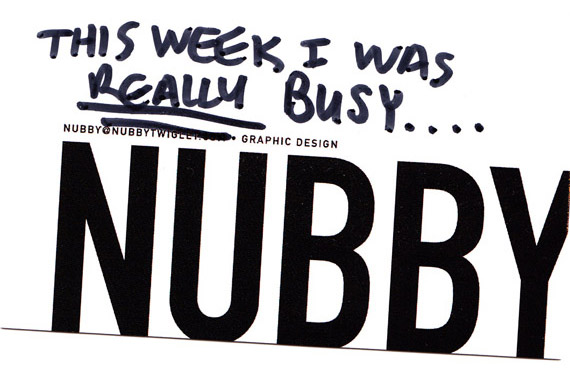 This week was busy for some good reasons and some bad. Good: My mom was in town from Phoenix to visit! We showed her around the Doug Fir, Jupiter Hotel, Saint Cupcake, various bakeries and more. She got to meet Rocky and try Joey’s famous Pumpkin Ale. And in bad news, my beloved grandpa was in the hospital. More on that later. 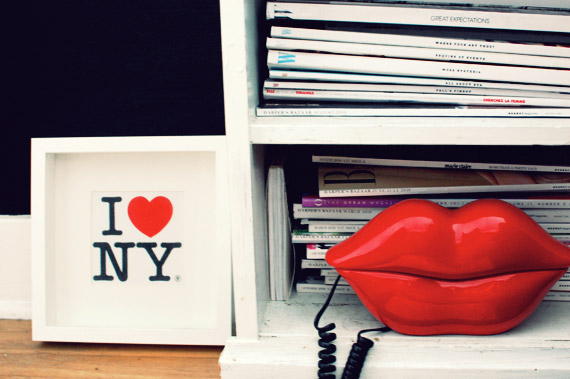 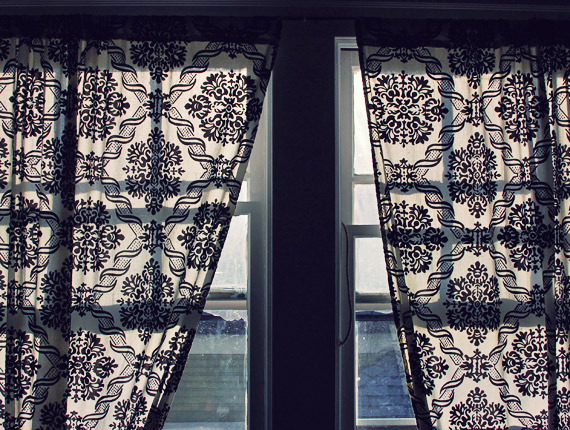 Awhile back, I mentioned that I would try to show more photos of Wolfgang Manor. House renovations / modifications have been slower than expected but with a few more updates, my bedroom will be complete. A new overhead light, headboard and a few smaller things and it will be done. And, then I can give you a legit tour instead of mysterious little snapshots! 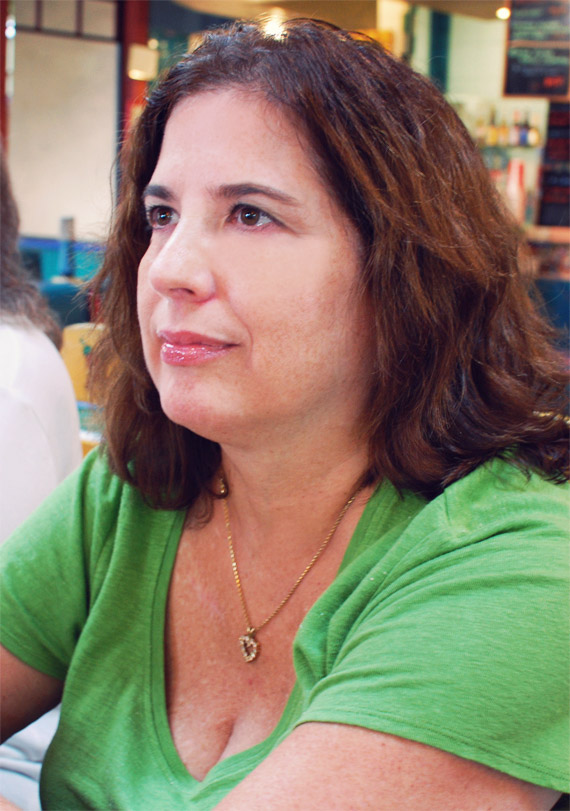 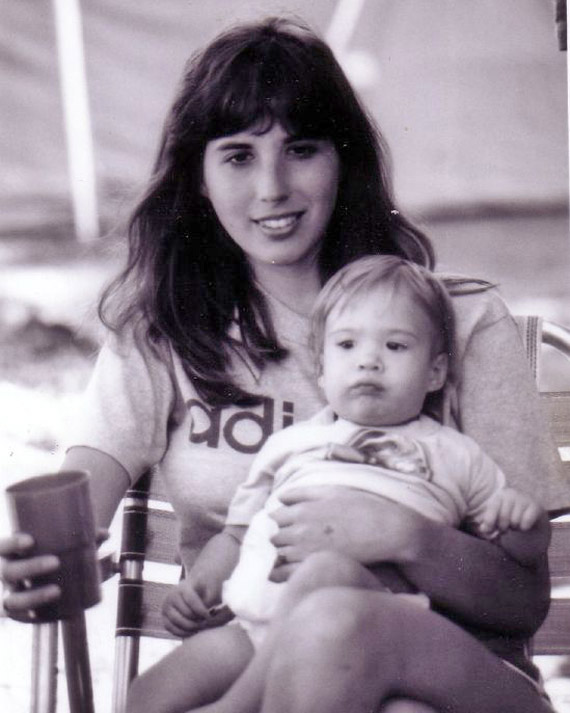 This week, Mama Nubs was in town! We’ve come a long way, baby! Above: 2010 and 1982, respectively. We had lunches, dinners, shopping excursions, coffee runs, cleaning marathons (on her part, not mine!) and it was good to catch up on my home turf. She actually grew up in S.E. Portland as well so it was fun to hear all of her stories. At least our next visit isn’t too far off since I spend some time in December with her every year. 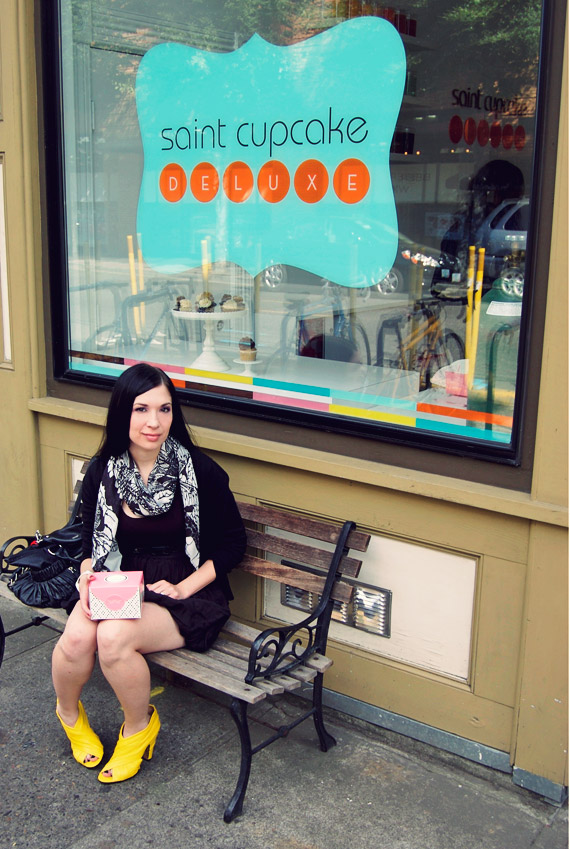 I made sure that Mama Nubs got to try Saint Cupcake, my all-time favorite. I’d devoured two vanilla cupcakes with vanilla frosting by the end of the night. Oops! 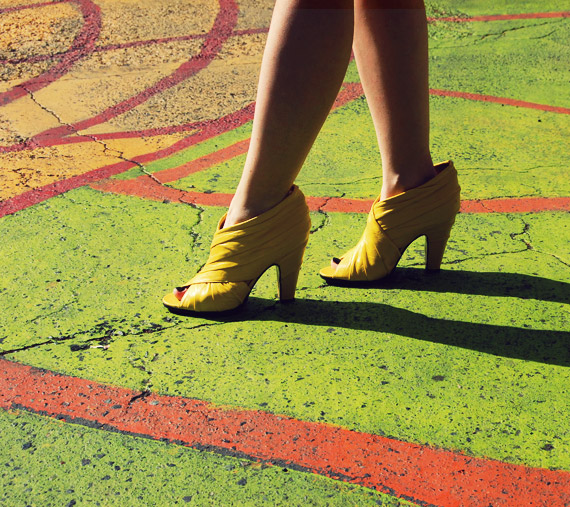 We also did some walking through the Hawthorne / Belmont neighborhoods. 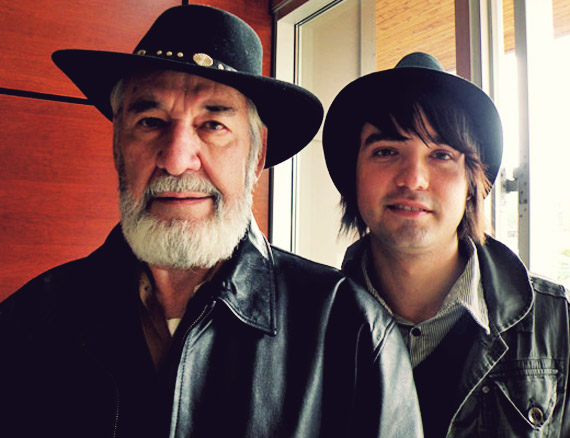 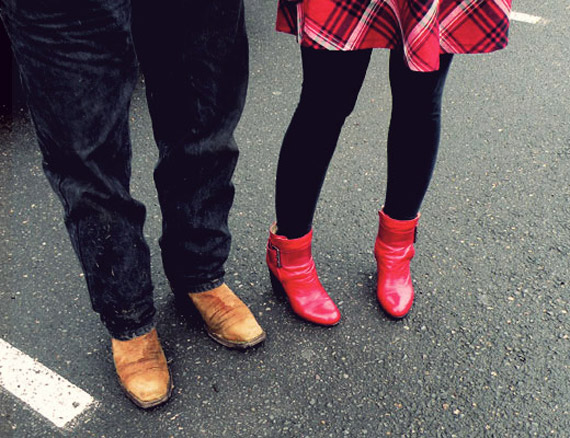 So, here’s a heartwarming story.

Over the weekend, my 83 year old grandpa was rushed to the hospital with a blood clot on his brain. We were so worried and visited the emergency room at OHSU that night. Amazingly, he was totally coherent. He just wanted to get in his truck and go home! See, my grandpa (everyone calls him Sharkey!) isn’t any ordinary grandpa. He’d never had to stay in a hospital ever. He didn’t understand why he had to stay â€”Â he’s used to being up in the mountains, chopping wood and drinking beer!

The prognosis didn’t sound good â€”Â any surgery near the brain is inherently dangerous. And, even more so at his age. We worried the days away, visiting him almost every night after work. The whole time, I just kept thinking, “This can’t be it. He has so much life left in him!” This is a guy who doesn’t have a cane or glasses. Who seems to have less wrinkles than my dad. He’s Super Grandpa. Just last year, we were in Reno celebrating my grandparent’s 60th wedding anniversary (!!!) and while I was sound asleep by 10 pm, they were up drinking and gambling till 2 am! I can’t seem to keep up with them.

Anyway, he had surgery on Tuesday. He made it through and by the evening, he was awake and asking for me and my brother. So, I get to the hospital and he’s sitting in bed, watching a baseball game, eating a huge dinner and drinking a beer! And, my grandma is talking to us and forgetting things and he’s correcting her! I have no idea how any of this was possible but it really is a miracle. When he’s rested, I think it’s time for another Reno trip â€”Â a little gambling with the grandparents for old time’s sake!

Above are a few of my favorite snapshots with Sharkey. He only owns cowboy boots. In his free time, he enjoys sitting in his cabin, having a drink and listening to his 8-track collection. Favorites include Merle Haggard and Johnny Cash.

We are so happy that he’s back to feeling like his (young) self and he should be back home in the next few days. We told him to take it easy on chopping wood for awhile, though. 😉 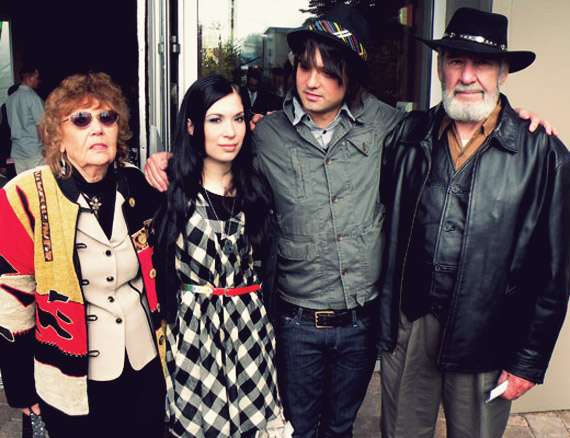 In case you can’t tell, my grandparents are the best in the universe. 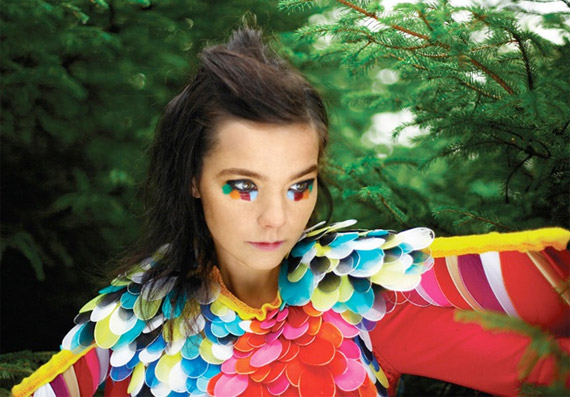 â€¢Â Sir Richard Branson: “If I could do it all over again….”

â€¢ Legendary husband and wife design duo The Vignellis were recently interviewed and talk about how they’ve managed to run a successful studio together for the last 50 years.

â€¢Â Rock N’ Roll Bride weighs in on how to have a perfectly imperfect wedding and life.

â€¢ Ooooh, lovely. I really like the Typography Coffee Mug.

â€¢Â I was so happy to read The Secrets of Trader Joe’s since I love shopping there every week.

â€¢ So, why did you skip the funeral? Being there for your friends in death is just as important as in life.

â€¢ What advice would you give to a graphic design student?

â€¢Â I cannot thank Gala enough for writing Radical Self Hate? Stop the Madness! One of my biggest pet peeves is listening to other women repeatedly criticize their appearance and weight. There’s so much more to life than the number on your scale….maybe that’s why I’ve never owned one.