What was your style like as a teenager? How did you dress and what kind of fashion were you into? 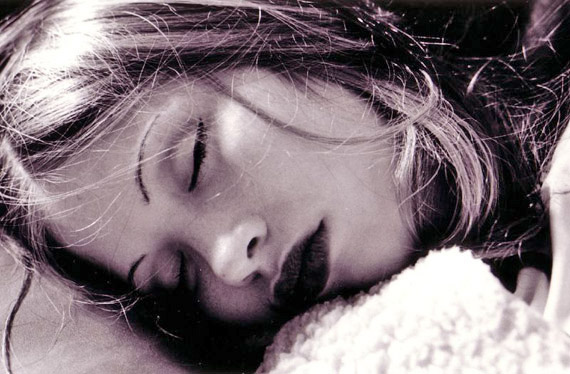 Ah, the teenage years! It’s very funny to think back to the not so distant late 90s, when I was in high school (I’m focusing on high school while answering this question because middle school was pretty blah). Back then (1996 to 2000 — I say that like it was ages ago), things really were more off-the-cuff and experimental. Fashion blogs hadn’t yet surfaced; I don’t think I even knew what a blog was at that time.

It’s interesting looking back now, noticing how much the times have changed – none of us had cell phones in high school. We weren’t connected to the internet 24/7 (or at least I wasn’t). In a way, I’m glad that I wasn’t granted immediate access to every little trend. I am afraid now that my style (and wallet) would be overly influenced. It’s bad enough being bombarded now at 28 (when I am much less impressionable)! 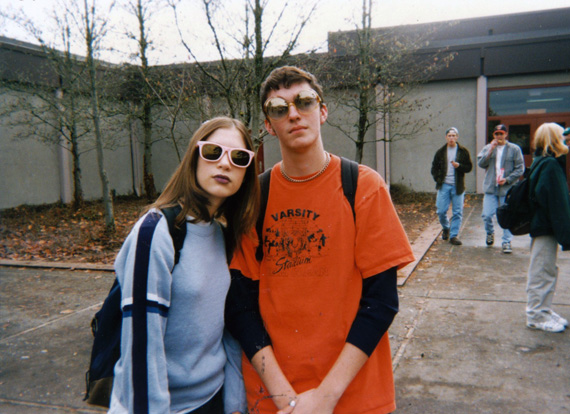 1996, With my friend Jesse (who I haven’t seen since high school)

During those years, it was much harder to track down a specific item – I found my wardrobe at a handful of places: Goodwill, Hot Topic, Nordstrom BP, Buffalo Exchange, Urban Outfitters and the Delia’s catalog (I wish I still had some of those 90s issues with the catchy themed phrases throughout!). There wasn’t a Forever 21 in every mall and the plethora of online indie boutiques hadn’t yet populated every corner of the internet. 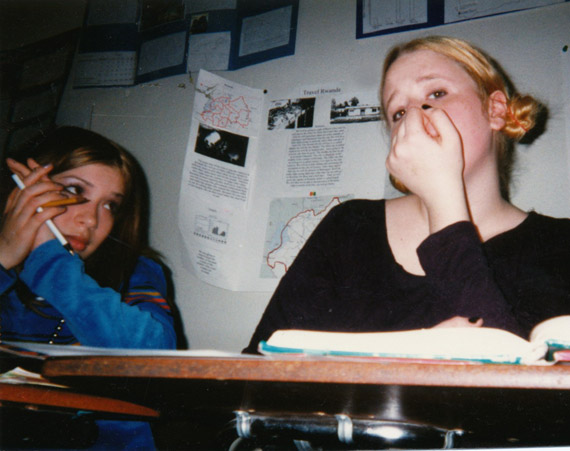 Age 15 in 1996, right after I met my best friend Erin. We had many classes together, but she always skipped, leaving me to finish projects!

When I started high school in 1996, my style was eclectic, colorful and grungy. I loved tons of colors at that point, surprisingly. It was cool in my suburban high school to wear baby tees, oversized cords or jeans, band shirts, vintage dresses, striped sweaters, cardigans and mismatched layers. I was still experimenting and figuring out my trademark style during this time. 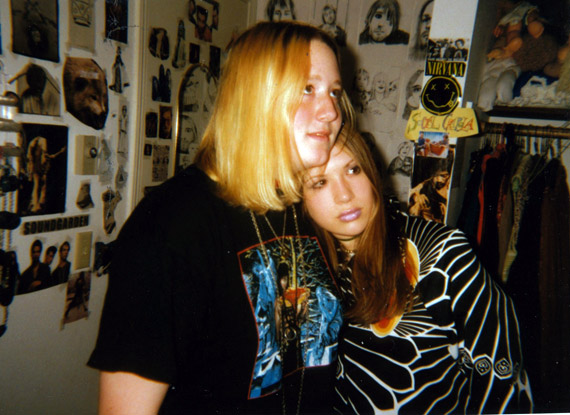 Wearing a weird vintage polyester dress with Erin (check out her The Crow shirt!), 1996

Then, everything changed my sophomore year. Over the summer, I discovered Marilyn Manson, got a pair of 14 eye black Doc Marten boots for my birthday (thanks, mom!) and decided that wearing all black was the way to go. My friends and I would swarm the local Goodwill after school and find the coolest castoffs. It was a much different time – wearing designer clothing or carrying a designer handbag definitely was not cool. We carried backpacks or vintage lunchboxes instead. 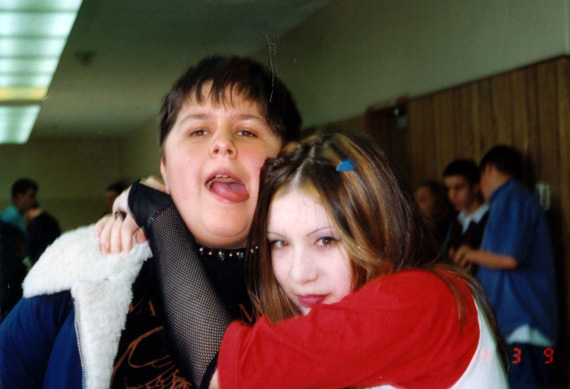 Goofing off with Richard, 1997

I remember having every color of stripey tights imaginable and I would save my money to buy new clothes and jewelry at Hot Topic. Though there weren’t fashion blogs, there were popular ‘cam girls’ that would show off their new purchases (who were your favorites?)

Being ‘different’ in a really uptight suburban high school wasn’t easy but I always stayed true to who I was. Nobody could really say anything, even when I showed up looking like a total freak because I always had near perfect attendance and made the honor roll.

When I was 17, I went to a Marilyn Manson concert and met him afterwards on the steps of his tour bus. He was the nicest guy. My classmate’s jaws dropped when I came back on the following Monday and casually mentioned that I’d met him. After that, I really didn’t care what anyone thought. People would make rude comments but that only fueled me more. I told myself that someday, I would get the last laugh.

Around the same time, I started dating an older guy who not only worked at a record shop but was also the most amazing hairdresser. From then on, I traded in my boring brown hair for shades that covered nearly every color of the rainbow. Usually, I had my hair in a bob with neon colored roots (purple, pink or red — see below) paired with black tips.

During my last two years of high school, I was far beyond the drama (and beyond bored). And, most of my close friends had dropped out or were a year ahead of me and had graduated. I spent most of my time taking art classes, then skipped prom and graduated. I didn’t even want to walk in the ceremony, but I did it for my parents. 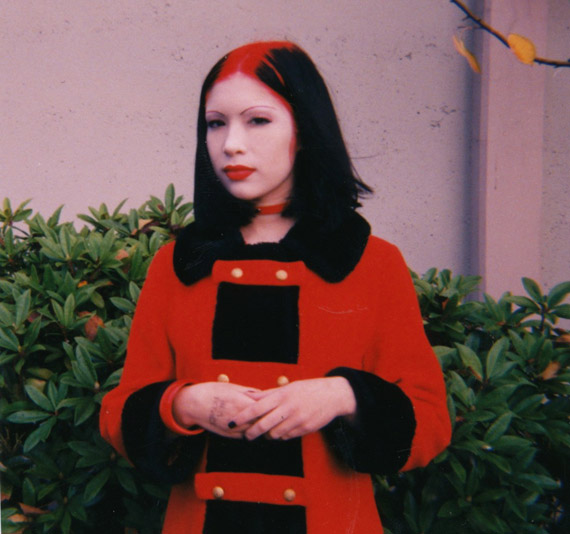 My trademark 2-tone hair a few months before I graduated, 2000. The beginning of Nubby Twiglet.

Can you tell that I didn’t care? Ha. I took this photo and a few more in my school’s courtyard for the senior pictures section of the yearbook. It was my way of rebelling against those cheesy posed shots! My hair looked like this for quite awhile — I got the roots bleached and changed constantly and matched my wardrobe around the color.

I was really into vintage Swiss poster design and medical-themed stuff at this point. I wore a little white dress that I have to this day with red cross pins across the front all the time. I also came up with the idea for Nubby Twiglet around this time.

Now that it’s been 10 years since I graduated from high school, what would I tell my younger self? I would remind myself that I was right to not conform – it made my life a lot more difficult at the time but it also made me stronger and care way less about what people think. I also would tell myself that many of the people that made fun of me ended up staying in the same town, in jail or worst of all, dead (seriously) and that none of what they said really mattered anyway — now I think back at some of the comments and get a good laugh!

If you’re still in school, as chiché as it sounds, stay true to yourself. High school doesn’t last forever. If you’re feeling disillusioned, start thinking about what you want to do next. If you hate your town, your parents and your life, it’s okay to be dissatisfied but don’t take it out on everyone else — use that energy to plot your next step instead. Once you graduate, move to a bigger city. Get a job. Find roommates. You’re bound to make new friends wherever you go and thanks to social networking sites, it’s now easier than ever. Apply for colleges – you’ll meet even more like-minded people. Your life is yours and your alone. If people spend their time trying to tear you down in high school, brush it off…and use it as fuel to prove them wrong. Time flies — get out there, make your mark and stand tall when you return for your 10 year class reunion!

What was your style like as a teenager? Was it completely different than how you dress now? Have you embraced it or are you terribly embarrassed? What would you do differently in 2010 compared to then?