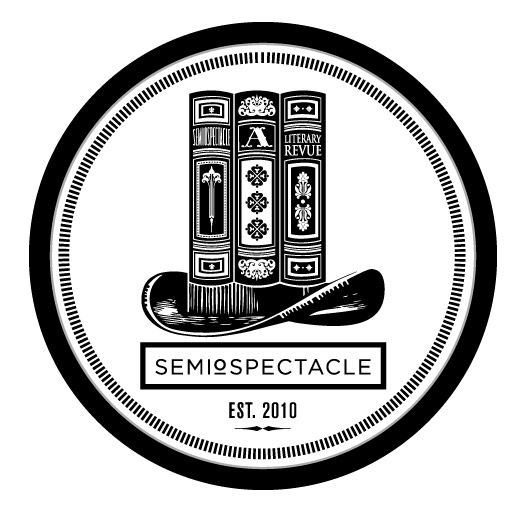 I just designed the logo, flyer and catalog for the upcoming event Semiospectacle: A Literary Review, which will be held this Monday, March 22nd in New York City at Performance Space 122.

The curator of the event, Mashinka Firunts had prepped me by gathering inspiration beforehand. She’d defined a very clear visual direction that she wanted to take the branding and for as much work that had to be done, we moved through the process quite quickly. There were two strong runners-up for logo options but in the end, we felt that a more literal interpretation of the literary aspect of the event was needed. 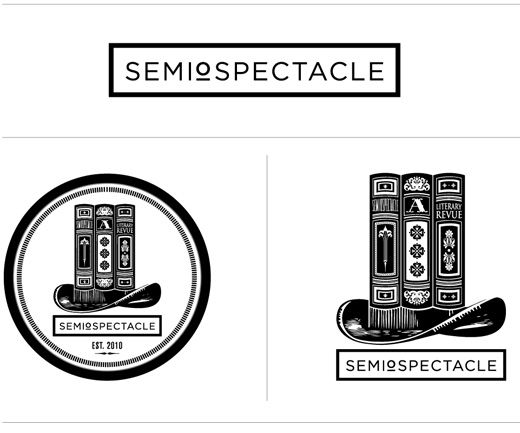 Because the top hat / book logo is very bold and detailed, we agreed that the Semiospectacle type should be more clean and subtle. Since it’s not a word that registers immediately with viewers, legibility was very important â€“ I ended up setting it in Gotham. 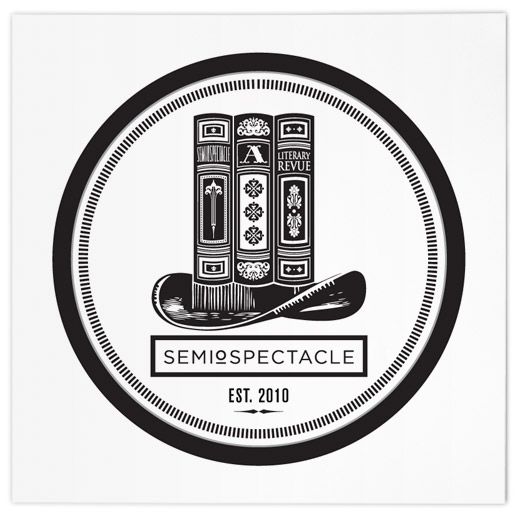 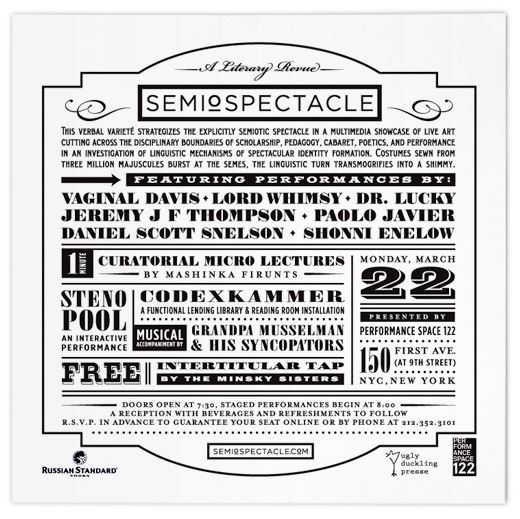 Once the logo was complete, the next step was to design an oversized, double-sided show card. Mashinka wanted an old-timey feel but didn’t want it to venture too far into a loud, vaudeville-style clichÃ©. The biggest obstacle was trying to fit the abundance of type on the back while sectioning it off so that the viewer could see that there were multiple performers. While I used some decorative type, it is balanced out overall by the crisp, black and white palette. 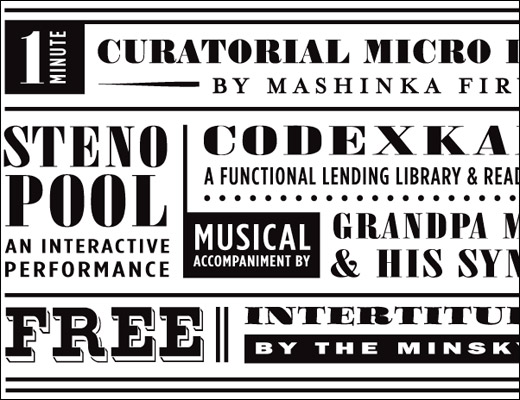 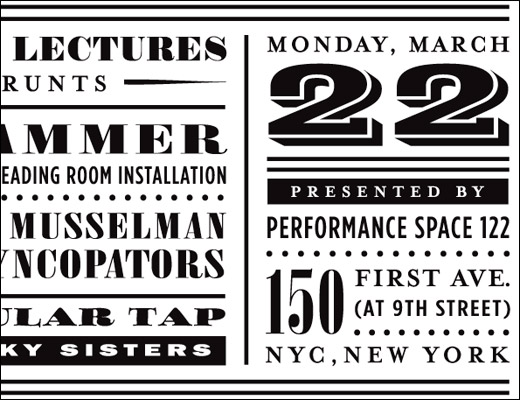 Here are some of the type details from the back. For much of the tiny, descriptive text including the address, I used a combination of Trade Gothic and Mrs. Eaves. 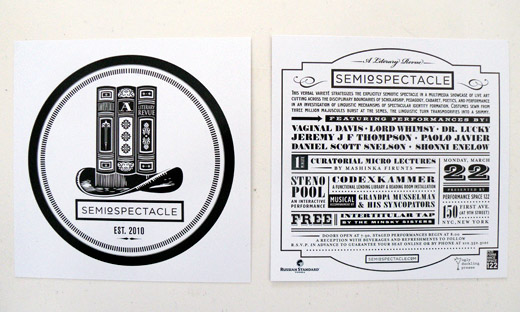 The show card features a matte finish on both sides and measures 6 x 6 inches. 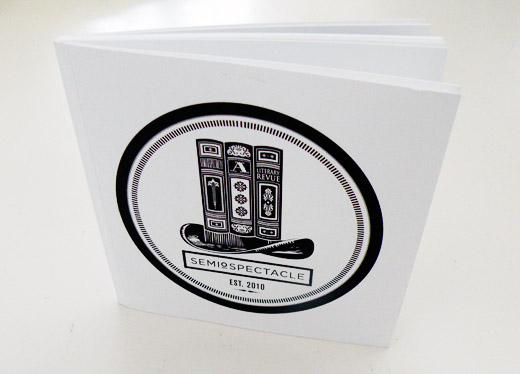 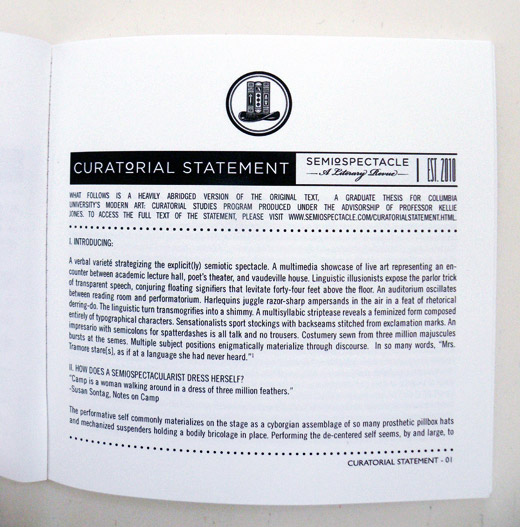 Once the show card was completed, I moved onto creating two standardized InDesign templates for Mashinka so she could create a catalog featuring all of the Semiospectacle information and performers. 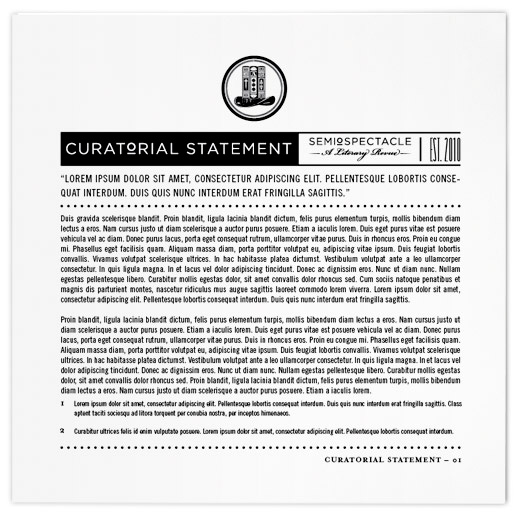 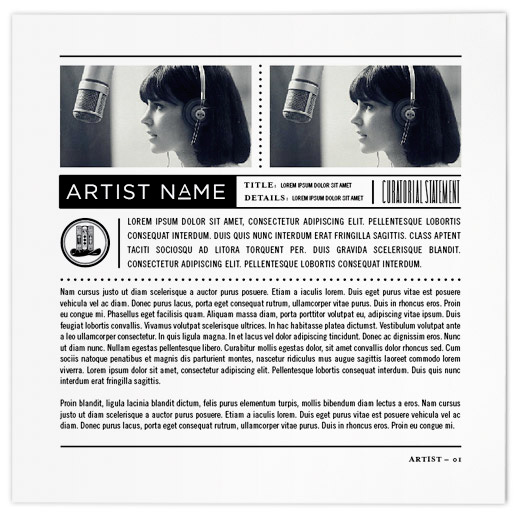 We went through many rounds to get the layout just right. The Curatorial Statement and Artist Pages ended up looking very similar to these template options (the photos above are just placeholders). 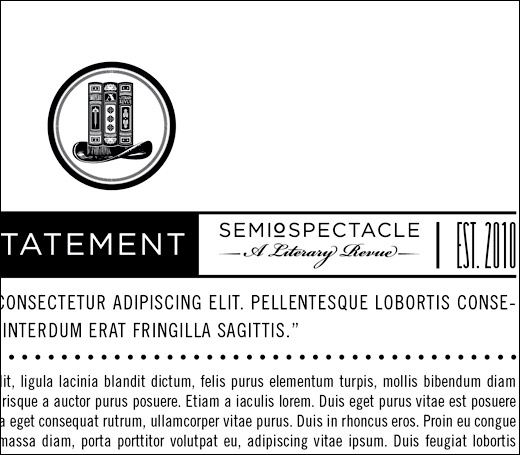 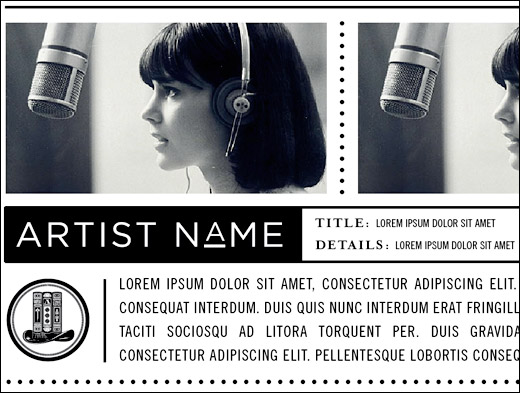 These are the template details. All of the body text is done in Trade Gothic.

Of course, if there was an unlimited budget, there could be endless branding possibilities for Semiospectacle. I ran with a few concepts that I thought would be fun to use around New York City. 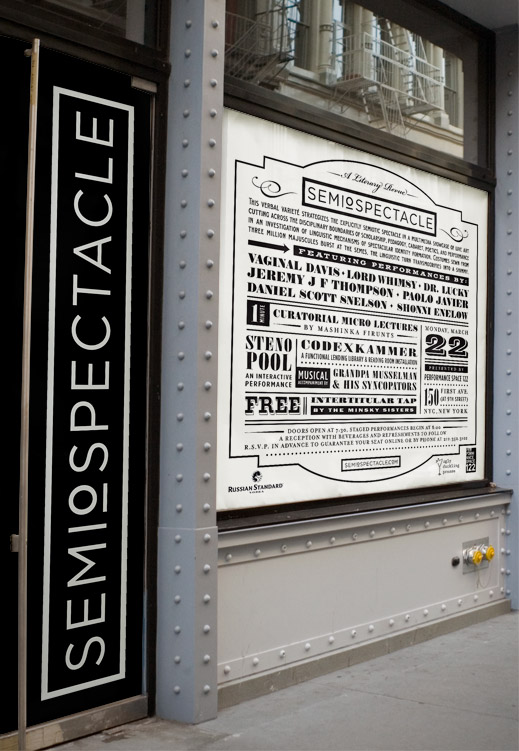 In Manhattan, there’s so much advertising space along buildings. I would enlarge the show card for mounted signs and brand doorways with the Semiospectacle type. 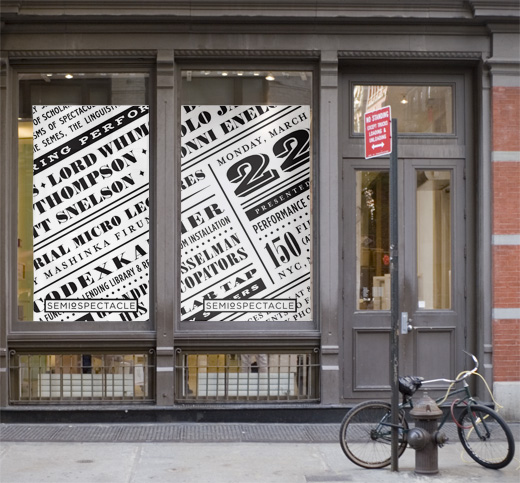 I really like the idea of blowing up the Semiospectacle type to grab viewers’ attention. The show cards would be placed by the doorway if they sought further information. 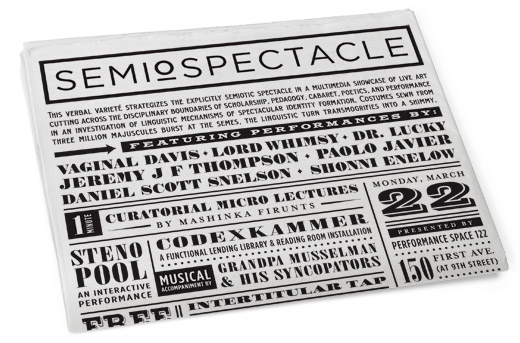 Extra, Extra! I also think it would be cool to make Semiospectacle newspapers featuring the show information on the front with artist details printed inside.

Ticket reservations for Semiospectacle have already reached maximum capacity but a 10 PM performance has now been added.

Here is the full show description and details if you are interested in attending:

This verbal varietÃ© strategizes the explicitly semiotic spectacle in a multimedia showcase of live art representing an encounter betweenÂ  academic lecture hall,Â  poetâ€™s theater, andÂ  house. Its players cut across the disciplinary boundaries of scholarship, pedagogy, cabaret, poetics, and performance in an investigation of linguistic mechanisms of spectacular identity formation. Linguistic illusionists expose the parlor trick of transparent speech, conjuring floating signifiers that levitate forty-four feet above the floor. Costumes sewn from three million majuscules burst at the semes. The auditorium oscillates between reading room and performatorium. The linguistic turn transmogrifies into a shimmy. Curated by Mashinka Firunts.

A huge thank you goes out to Semiospectacle and Mashinka Firunts. This has been one of the most fun jobs I’ve ever done â€“ black, white & type-based; a total dream come true. If you attend the event, let me know what you think!