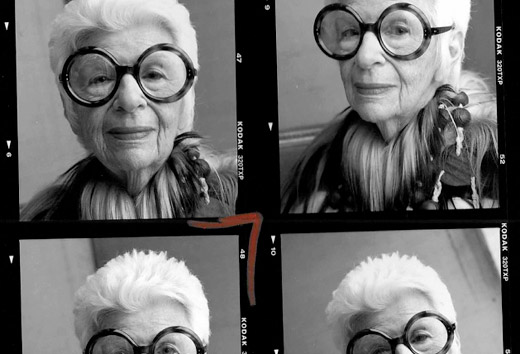 Iris Apfel is an American style icon. She started shopping for her own clothes at just 12 years old and at 84, she says that her style has remained pretty much the same over the last 70 years. Apfel’s look stands out because she she mixes colors, textures and patterns in a bold and imaginitive way with pieces from around the world spanning multiple decades.

Another signature of her style is the merging of high and low fashion such as Dior Haute Couture with flea market purchases. She was doing this long before it was the accepted norm and even today, she appreciates the spoils of H&M, mixing a $79.00 faux fur jacket and $29.00 skirt into her colorful wardrobe.

In 2005, Apfel was the subject of an exhibit called Rara Avis (Latin for â€˜rare birdâ€™) at the Metropolitan Museum of Artâ€™s Costume Institute that showcased her clothing and accessories. The mannequins were instantly relatable to Apfel due in part to their large, round glasses.

Apfel seems more accessible than many other icons because she claims that she never bought clothing to collect but instead to wear.

Of her sizable wardrobe, she says:

Everything in the show has been worn many, many times and I hope I will be able to wear them again. And I know people who have collections tend to keep them on a pedestal. I have a friend who has a brilliant collection of over 15,000 pieces and she gave me a look at it and she was pulling this divine Geoffrey Beene dress, and I said â€œOh God, you must have had fun wearing that!â€ and she was horrified! She said â€œWear it? I never wear anything in my collection, you donâ€™t do that.â€

In sharp contrast, when the Met curators came by Apfel’s Manhattan apartment to pick out items for the exhibit, there were no neat, untouched archives. Instead, they had to dig through her closets.

Over 50 years ago, Apfel turned her knack for pairing colors and textures into a textile business, founding Old World Weavers with her husband. Their travels and searches for the best fabrics further helped spur her fashionable mash-up. She has always worked and simply picked up clothing along the way whenever she had a free moment.

Of her vast collection of clothing, she says:

Iâ€™m not a fashionista, and that is not my life. I love beautiful clothes, and I appreciate them, but Iâ€™ve been in business all my life, I built a business, Iâ€™m involved in a lot of charities and all kinds of stuff. And you know, just being a clotheshorse is not my idea of heaven. 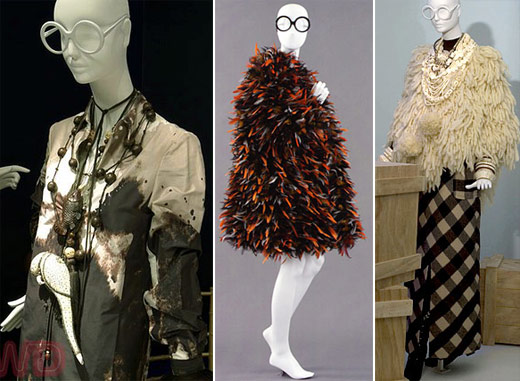 Pieces from the Rara Avis Exhibit

Apfel is still going strong and is bemused by the attention that she’s received since the exhibition. Lindsay Lohan wanted her to be her stylist after viewing it, Ralph Lauren half-jokingly offered her a job, she was asked to write a piece for Vogue and has been featured on television shows around the world. Not bad for a woman that claims to be the world’s oldest teenager!