A fellow reader recently proclaimed “How do you keep your living / working space(s) so organised and attractive??”

This is such a huge topic that I could go on for days about, so I decided to start with a singular area that many of us can use some help with…the closet! 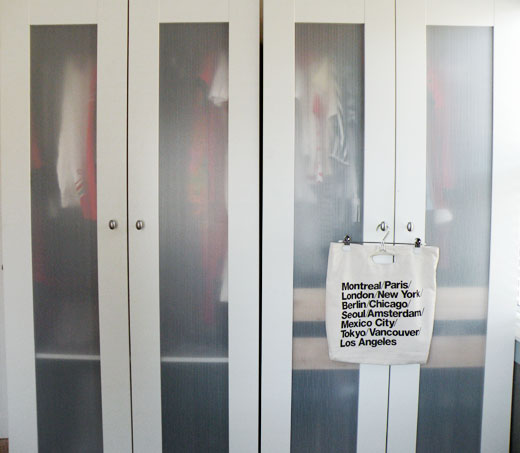 When Lee and I moved into our house last December, the closet space was almost nonexistent, as is commonplace for many houses built before 1950. As you can probably guess, I have a lot of clothing, shoes & accessories so I made the decision to outfit an entire wall with two identical IKEA PAX frames and picked out a combination of organizers that fit my needs. It’s the best decision I’ve ever made regarding organization because it was relatively affordable and you can pick and choose the interior fixtures.

THE RULES OF STAYING ORGANIZED

Do you have rules in place to keep your surroundings orderly? If you don’t, does your closet still stay tidy?

Over the years, I’ve developed a few helpful pointers that keep me from dealing with the prospect of having piles of clothing draped over every surface!

1. Put things back where they belong (almost immediately).

As nitpicky as this sounds, it really is key to staying organized. Usually within a day or two of clothing piling up on my floor, I take five minutes to fold / hang it up and put it back in my closet. It’s easier this way; we all know what it’s like when this doesn’t happen and unmanageable mounds of clothing begin to form. The feeling can be overwhelming and at this point, some people just can’t bear to deal with it. There’s no point in letting your belongings take away your sanity! 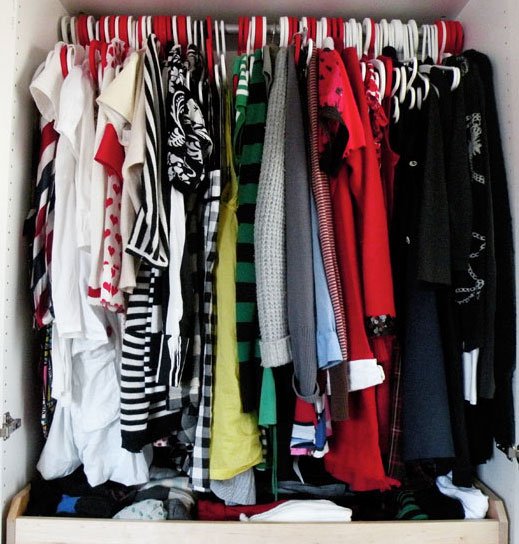 It’s also a sign of respect to treat your clothing well. Unlike my boyfriend (who wears black t-shirts every day), many of my items are one-of-a-kind and I want them to last! The thought of them getting trampled on and wrinkled isn’t very appealing…unless that’s your style!

2. Figure out a system of organization that makes sense to you.

Perhaps you enjoy arranging your clothing by color, by size, or by season. Color arrangement seems to work for me. This method is easy since my palette is very limited.

Others seem to do well with arranging items by a hierarchy of size such as starting with shirts and ending with pants. Still, there are some people who keep their closet stocked with lightweight seasonal basics for Summer and switch it out to a Winter wardrobe when the weather changes.

Do you have a particular method that works for you? 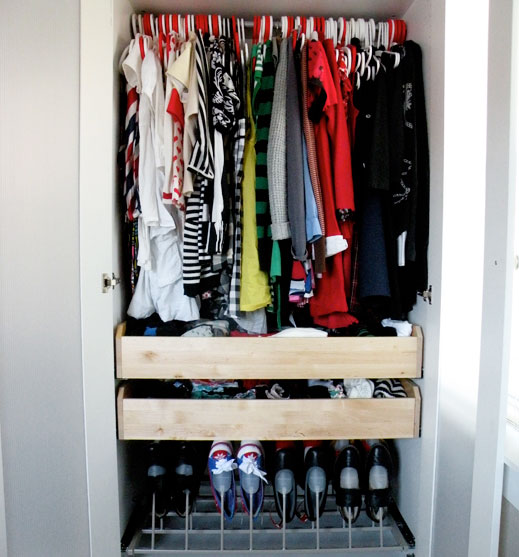 There’s something really refreshing about getting rid of old clothing that you no longer need. Besides making space in your closet quarters, it also seems to have a mental effect, sort of like you’re clearing the cobwebs out of your head! Recently, I started cleaning out my closets and five bags later, I have a sizable amount of things to sell on Ebay and to donate.

Besides making some extra money, the your additional castoffs can be donated to the needy (see the resources below). It’s a win / win situation!

I work faster with a goal in mind so as a motivator, once I’ve cleared out all of the bags, I’ll buy one really nice thing like a pair of shoes I’ve wanted for ages. Over time, I’ve realized that I’d rather have one fantastic item that I’ll use constantly instead of a pile of cheap junk that takes up space anyway.

If you’re indecisive about what you should hold onto versus what it’s time to throw out, invite a friend over and in return for their opinion, offer up some of your giveaways. A few years back, I spent the day with my aunt’s friend offering my feedback and about what she should hold onto. In return, I ended up with a beautiful wool Banana Republic skirt and vest that no longer fit her. We all benefitted; she had the space she desired and I had free clothes!

Whether it’s stored away mentally or scribbled onto paper, taking inventory and creating a list of what you really need is important. Case in point: Last month, I walked into an H&M in New York and added a plain black shirt to the pile of colorful clothing and accessories that I was purchasing. I had packed a similar version, but but my suitcase was stashed away on the other side of town. The shirt was under $10.00, but I still felt guilty because I knew I already had one. Now that I’m back home, guess what I’ve worn most out of all my purchases? That basic black shirt!

If you keep a list, you’re also less likely to make impulsive purchases. When you really need black leggings but are presented with 30 other patterns and colors at American Apparel, it’s easy to be hypnotized into picking up something else just because it’s ‘cute.’

5. Develop ‘special places’ for your belongings.

Give everything a spot. Do you have a place for your socks and underwear? How about jewelry? Besides helping you stay organized, having a designated area for specific items means that you’ll always know where they are!

When I was younger, my mom would regularly pay me a few dollars to line up her shoes in the bottom of her closet. A few weeks later, they’d we scattered all over once again. I’ve avoided this problem by installing a shoe rack that has a space for each shoe, pulls out and actually lets me see everything at once! 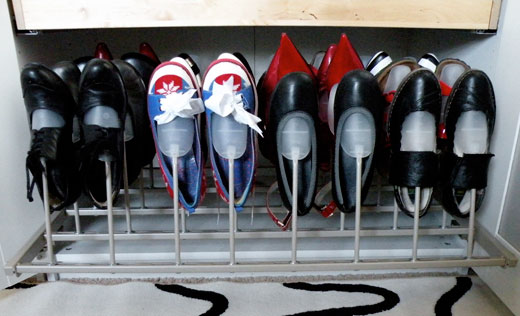 Also, socks and tights can be another battle. They always seem to lose their mate and get tangled. Because of this, I gave them a special drawer and attempt to keep it organized by colors and sections. Everyone is sure to have their own method and it’s a matter of figuring out what works for you. 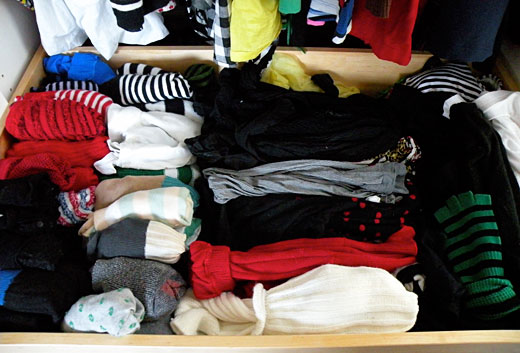 6. Have more than one closet.

This might be impossible for some of you due to space constraints (or perhaps not necessary), but the reason I bought two identical IKEA wardrobes was to designate one side for everyday basics; this has been a huge timesaver because I wear almost everything on the right side constantly. The left wardrobe is comprised of coats, skirts, dresses and costumes that I don’t wear as often. Additionally, there is space for boots and heels that won’t fit on the shoe rack and shelving for folded t-shirts. 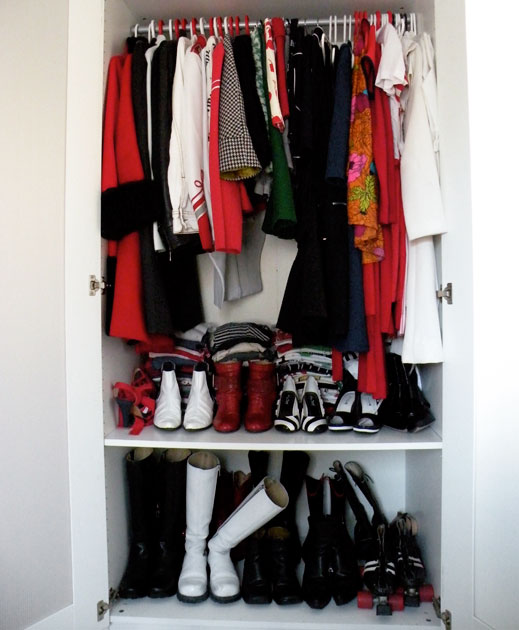 This side of the closet is mostly by color but the items are so varied that necessity calls for some things to be by size and weight also.

HOW TO MAKE A DIFFERENCE

After you’ve cleared out all of your excess clothing, there are plenty of ways to put it go good use. According to Charityguide.org, Americans throw away 67.9 pounds of used clothing and rags each year. Collectively, we discard two quadrillion pounds (that’s a two with fifteen zeroes) of used clothing and textiles into the landfills each year!

1. Charityguide.org has a thorough list of special needs organizations that are looking for women’s clothing and also provides a list for general donations.

2. eHow.com offers articles on how to donate clothing to a homeless shelter and how to find clothing donation centers.

3. Thegreenguide.com explains the often complex story of what really happens to donated clothes.