1. In How to Earn Your First Love Dollar, Steve Pavlina makes the argument that all you need to do to move forward with your dream profession is to make that first dollar doing whatever it is that you love. He goes on to say that:

When you accept that first love dollar, you tell the universe, â€œOkay, Iâ€™m willing to be paid for this kind of work. Can you bring me more opportunities like this?â€ And the universe will say, â€œAbsolutelyâ€¦ no problem.â€

2. Gala Darling teaches us how to be more assertive. Super practical and timeless advice!

3. When you should add a newsletter to your blog? ProBlogger unlocks the mystery!

4. In case you’re curious (and I know I was!), Kate tells us how to get into Parsons and other big name art schools.

5. Does photographing yourself and your style equal narcissism? Tricia of bits+bobbins always makes us think!

6. Here’s a selection of cool business cards courtesy of Inspiredology!

7. Copyblogger offers up two great resources, 10 quick tips for building a business online and 10 key things to do before starting a business blog.

8. In case you’ve ever wondered, here’s how to use PR people to build traffic to your blog! 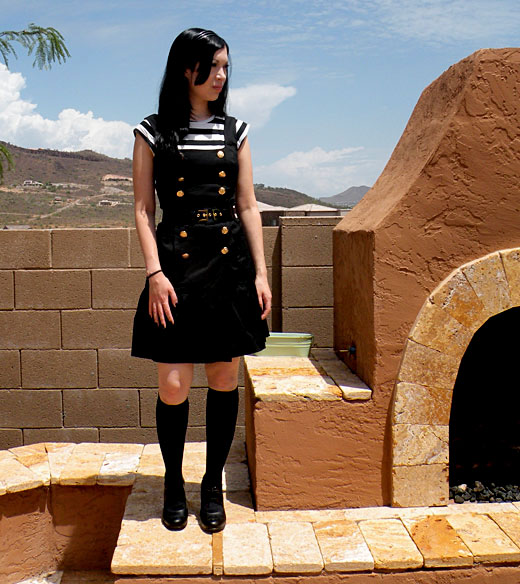 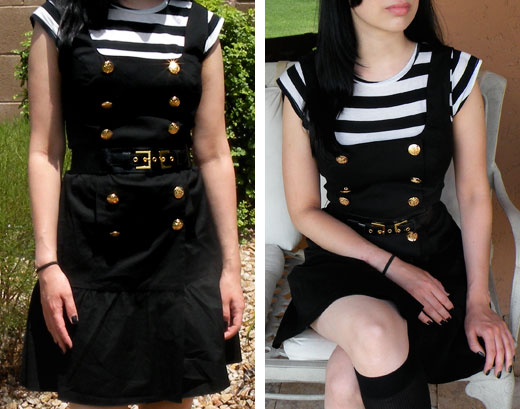 After leaving New York City on Friday morning, I flew straight to Phoenix to spend the weekend with my mom & stepdad. They both relocated there from Oregon about six months ago and this was the first time I had a chance to visit. The desert really isn’t my style, but I was pleasantly surprised by how nice everything turned out to be. Their house is surrounded by mountains and they have (real) green grass, so I had tiny reminders of the Northwest.We went shopping in Scottsdale and I spotted this bebe dress in the window; I absolutely cannot stand wearing gold, but I loved the sleek stewardess feel and the fact that it was made of a light, summery cotton. Also, all of the things I own in this style are navy and I am a much bigger fan of black! I’m so glad I bought it; there’s no reason to let past tendancies control your future! A few gold buttons aren’t the end of the world! 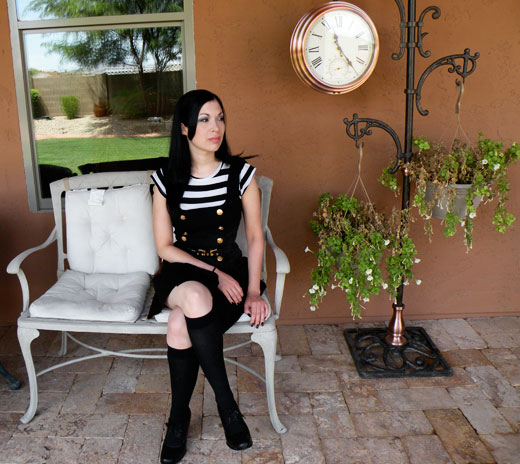 P.S. I was actually quite happy, but the sun was so bright that I am squinting in every shot!

How I Became a Twitter Addict (And Why You Should, Too!)

I’ll freely admit that I was a long standing Twitter holdout. With profiles on Facebook, Myspace, Flickr, Behance, Buzznet, Live Journal and my personal blog already clogging my schedule, the motivation for adding another social networking site to my list of engagements was definitely lacking. Months of being preached to about the positive virtues of Twitter (hi, Star and others!) fell onto deaf ears.

The turning point came last week when I was staying with Gala Darling in New York City. She explained that for bloggers, Twitter is a worthwhile tool because it can be set up to notify followers of when you’ve updated your blog. Essentially, folks following you on Twitter are provided with a quick, on-the-go reminder of what you’re up to. And, in return, you can gain some steady traffic to your blog posts.

After one more deft attempt to escape the world of Twitter, Gala took over and signed me up on the spot (that girl means business)!

I entered the secret code and my life flashed before my eyes. There was no turning back!

Within three days, I had 60 ‘followers’. An instantaneous following is a pretty seductive thing. And, the rest is history; a Twitter fiend was born!

While some have found the advent of Twitter (and for that matter, Plurk) to be a distraction from blogging, Darren Rowse of ProBlogger holds the opposite view:

I personally find that Twitter informs and inspires my blogging. The interactions that I have, the conversations that I see others having, the questions that Iâ€™m asked and the answers that other users of Twitter and Plurk give me are constantly feeding me with ideas to blog about.

So, why should you join the masses of twittering addicts?

1. You Can Find Blogging Inspiration

If you’re stumped on what to write about, posting a quick ‘tweet’ (a post or status update) in the form of a question or poll to Twitter can provide a platform for your biggest fans to brainstorm and tell you what they really want. In a matter of minutes, it’s possible to have an abundance of clever ideas gathered on your screen via users from around the world!

2. It Reminds Followers to Check Out Blog Posts

It is possible to set up a feed that publishes your blog headlines directly to Twitter with a handy link. Some people just don’t have the time to keep up with RSS feeds and linking your article in this manner can be much more user friendly.

3. Your Readers May Make a More Personal Connection

Twitter has the ability to take on a more spontaneous, playful side of a blogger’s personality. Since tweets are often fired off multiple times a day (whereas a blog post from the same user may go live once a day or even less frequently) and posted on the spot with a maximum of 140 characters, they tend to be short and sweet and more to the point since space is limited. There’s not enough room to defend your views, to delve into a disclaimer, or to give a back story.

When blogging, many of us focus upon a niche topic (examples being music, street style, self improvement, D.I.Y. crafts) and may not want to clutter the front page of our blogs with random, off-topic personal tidbits such as, “I’m in line at the store and just saw Michael Jackson in a wheelchair” or perhaps “Courtney Love just passed me up in a shopping cart!” Yet, these present tense mumblings give those subscribed to your Twitter feed a way to bond with you as a real person going about your daily existence, not just the persona they encounter on your blog.

a. The site is very user friendly. It takes a max of five minutes to sign up and get a profile in place.

b. Unlike the social networking behemoths Myspace and Facebook, Twitter is free of advertising (for now). Sweet Relief!

c. Keeping track of your favorite posts is easy. If you see a tweet of value, click the star directly to the right of the message and effortlessly bookmark it for future viewing:

Of course, not everyone will agree that Twitter is the equivalent of the second coming of Christ. Some points of contention are:

Since the number of characters on a Twitter post are limited to 140, it’s not always possible to reply in an intelligent, in-depth manner. Dave Allen’s take on its shortcomings is pretty accurate. He says that:

I still believe a good, well written blog is the place for conversation. Twitter, a micro-blog, is not. I use my Twitter account to drive traffic back to my blog where the conversation can really open up. After all, Twitter only allows 140 characters so truncated updates are the norm, which is fine. On both my blogs, the other being Pampelmoose, I enjoy reading comments that can often be longer than the original post – something that is impossible with Twitter.

While firing off short and succinct messages may be fun, the time it takes to do so can add up quickly. Some people become so preoccupied with tweeting that their blog postings begin to dry up. In my view, Twitter is not a replacement for blogging but rather a tool that complements and reinforces blogging efforts.

Twitter is a free, easy to use social networking service that isn’t cluttered with ads and other unnecessary applications. If you’re an active blogger, Twitter has the ability to keep on-the-go readers informed and provide them a more personalized experience. If you use it with a purpose in mind, it’s a win-win situation for both you and your subscribers. I can’t believe that I stubbornly held out for so long!

Blacktooth Clothing: A Labor of Love

Selections from the Blacktooth Spring 2008 line (L to R): Can You Hear Me, Love Kills, Tokyo and Bitches to Riches.Â Â


The Background on Blacktooth
Six years ago, when my brother Carey (nickname: Smokey) was still in high school, he decided to start a clothing label called Blacktooth for his senior project. The line started out with a handful of t-shirts that were covered in designs that had been hand collaged (back then, he didn’t have a computer)! He’d sell them to our friends for $10.00 each and then reinvest the money towards a new design.

Since then, Blacktooth Clothing has grown by leaps and bounds with a minimum of two full collections being released each year. Besides being sold directly through its namesake website, Blacktooth has been picked up by boutiques worldwide including The Wasteland in L.A., North Trooper in Toronto, and Hidden Labels in the U.K.Â Â

I may be a bit biased, but my bro is the full package. Besides designing t-shirts, he’s full of ridiculously witty advice.

On the topic of Summer essentials, his recommendations are:
1. Don’t cut your jeans off cause when winter rolls around, you’re gonna freeze. Instead, roll them up.

2. Buy black pants ’cause when they rip, you can Sharpie your skin and no one will know.

3. Ride your bike. It saves money, doesn’t support the oil industry, and you need the exercise anyways from all the burgers you’re gonna be consuming.

Advice on Haters
With success at an early age (24), haters are bound to come out of the cracks. But, my brother is much feistier than I am and takes it all in stride. On the topic of the haters he encounters, he says:

Success causes more problems. I remember one time I did a shirt with a diamond on it way back in the day and this dude was trying to fight me in a parking lot saying I ripped him off ’cause the diamond is his logo and he’s been drawing it since middle school. Well, point and case be, right down the street was a diamond on a jewelry store sign that had been there at least 20 years before he was born. That is the type of stuff I run into. I wish haters would just quit talking and start creating.

Dream Big, Work Hard
Blacktooth Clothing was started by my brother with a few hundred dollars he earned from selling bootleg concert videos. He was 18 year old living in the suburbs of Portland, Oregon with a vision of creating t-shirts his friends and I would want to wear. He works hard, but has fun doing it. Every time I visit him, he’s on his laptop designing and submitting designs. That dedication paid off earlier this year when Urban Outfitters picked up three of his designs for nationwide distribution.

Our design sensibilities are very different, but I admire his dedication to consistently putting out the crafitiest, funniest shirts around.

The night before I left New York, photographer Bianca Alexis did an epic photo shoot of Gala Darling and I on a West Village rooftop. She is the lighting master!

In the first set of photos, Gala and her 5 inch licorice strap platforms towered over me. I need some massive heels for next time!

I love how the shoot hilighted our contrast in features, height and color choices. Style is all about being true to who you are and wearing what makes you comfortable.