Oh 2007, where have you gone?! As cheesy as it sounds, I felt like 2007 was ‘my year,’ the year that things really came together and started making sense.

The year started out with a bang when I did what I thought was a low-key show at a wine bar in Portland and within a week, I’d sold more work than ever before to an anonymous buyer! It gave me more confidence in what I was doing and made me want to work harder.The rest of January was pretty ordinary until I was asked by Fountains of Wayne to dream up some cover concepts for their new album. Less than two weeks later, I was designing the entire packaging including a 12-page booklet! Though stressful (only two weeks to do the entire project), the staff at Virgin Records and the band were some of the best people I’ve ever worked with. Once that was finished, I jumped into designing their tour shirts. I never expected by first real freelance job to be on such a big scale, but it’s true that things tend to come to you when you feel open and ready to receive them.Â Â

The second that job was finished, I began preparing for Modern Baroque, an art series based around gold and glitz. Stylistically, it was a big turning point from my previously saturated red and black work. I wanted to put even more effort into it, but by the time I’d finished my freelance job, I was nearly two full months behind schedule. Nevertheless, Kaebel of Sequential Art Gallery pulled out all the stops, turning the space into a mini gold mylar wall covered version of The Factory (and even dressed as Mr. Warhol himself!) It was pure magic. The show was the same night as my graphic design finals- I had to sneak out of class early, slither into some gold leggings and rush on over!Â Â 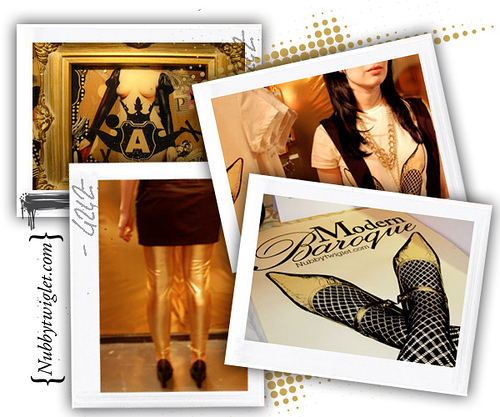 By the time Summer rolled around, I did my best to ignore freelancing and attempted to recover from the nonstop pull by traveling as much as possible. I was standing around at work one July day when my phone rang. It was my brother, telling me that Courtney Love’s tour manager had two tickets on hold for us if we wanted to go to her top secret concert the next night. Only problem was, we were in Portland and the show was in L.A. I spent the rest of the afternoon searching for airfares and by the end of the afternoon, we’d booked two astoundingly overpriced tickets. By 5 a.m. the next morning, we were on a plane to the desert!Â 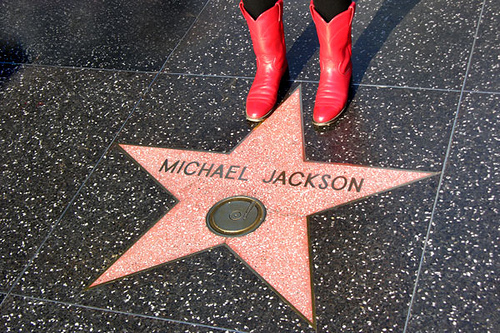 L.A. was like nothing I’d ever experienced- dry air, enhanced bodyparts, and fancy cars as far as I could see with severe poverty surrounding the outskirts. I must’ve cruised the Walk of Fame four times, just trying to take everything in.Â It felt so surreal as I walked along the stars to meet Star!

On the way to the Courtney Love concert that night, Jeffree Star was super gracious and picked us up to go out to frozen yogurt at Pinkberry. Gangsta rap blasting, we must’ve nearly gotten into five wrecks. People were double parking, blocking entrances, you name it. While Jeffree was ordering his frozen yogurt masterpiece, I turned around and Suge Knight was sitting directly behind us. We asked for a photo and he was shockingly nice!Â So was the show…except for a few thrown drinks and the crush of paparazzi.Â 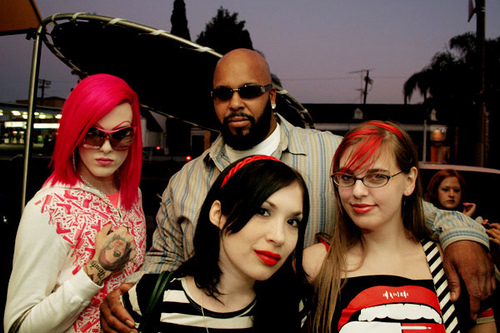 Going back to work the day after L.A. did a number on my head- cool, overcast weather and the reminder of what everyday life was really like began to sink back in! Luckily, I was able to make another escape from Portland a week later on a day trip to the Oregon Coast. (I might be biased, but it’s one of the most serene, beautiful places there is. There’s usually a breeze, slightly overcast skies, and the most quaint little shops lining the main streets.Â It’s my secret getaway when I only have a day to spare.)Â 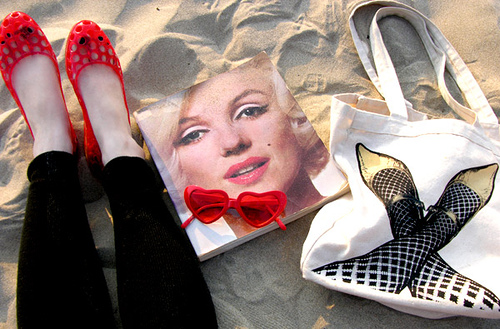 In July, feeling slightly restless again, Lee and I jetted off to Honolulu. I expected a tropical nightmare (I don’t do well in hot weather!) but instead, it was a bustling metropolis with a cool ocean breeze! I wasn’t expecting such a massive city in the middle of the Pacific. There’s way more to do than just shop and lay by the pool. The view from our friend’s balcony was amazing!Â Â 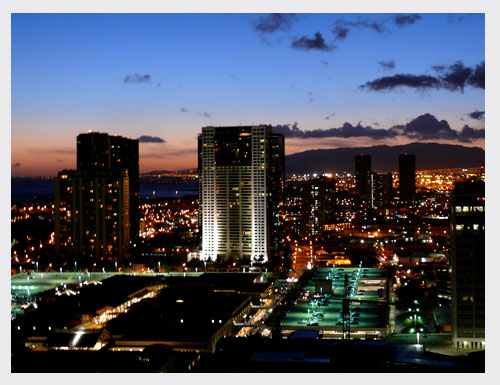 September was huge: My blog went live and I spent two weeks in New York City for my birthday (it’s becoming an annual tradition!)Â Auntie Nubs joined me for the first week and we trekked across the Brooklyn Bridge, visited Strawberry Fields, and hit Magnolia Bakery for a birthday cupcake.Â 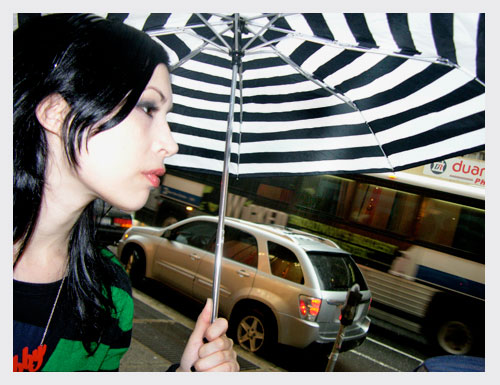 Photo shoots, visiting Chelsea art galleries, red velvet cupcakes and coke in glass bottles at Saks, dropping a Benjamin Franklin on pointy rainboots, and staying out till the next morning was part of the fun and made me feel alive!Â 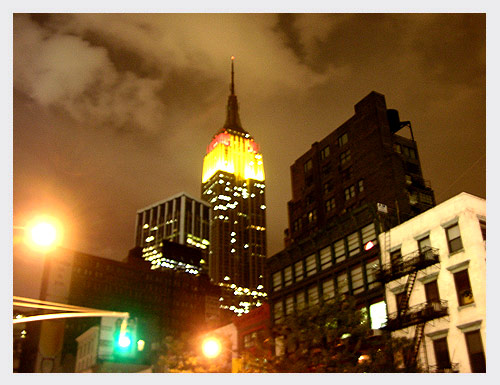 The week after I got back, I started my internship at Nemo Design. Getting hands-on real world design experience has been invaluable and it really really can’t be matched learning from home or in a classroom (not to mention, Nemo really knows how to throw a party!) I still feel honored each day I show up to just be there, absorbing what’s happening simultaneously in the four departments, watching an ad campaign come together piece by piece.

October flew by, but at least the last day of the month was memorable: I wore a faux nose and went at Steve Perry for Halloween. Dressing as a guy was odd- no purse or heels allowed! It was all fine and dandy until a David Lee Roth look-alike kicked me in the nose and knocked it loose! What I learned from the experience was…Don’t Stop Believin’!Â 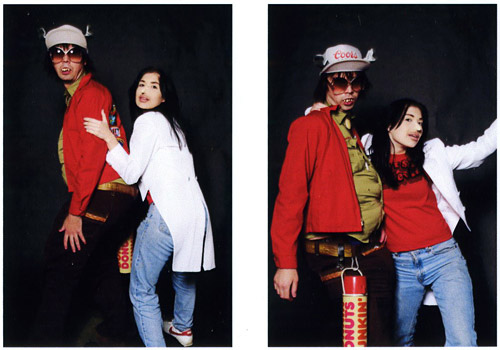 The year was tied up nicely in a big red bow when I finally got out of a dreadful living situation and moved into a place of my own with Lee Z. I cannot tell you how refreshing it is to decorate things the way I want, to live closer into the city and to feel (sort of) like a grown-up!

The beginning of blogging

As you know, 2007 was the year I decided to start this blog. I’d been active on Live Journal for six years prior and knew that I wanted to do something on a bigger level, but I wasn’t sure if it was a good idea. Traditionally, I felt like graphic designers as a whole seemed to be the types that were more about letting their work speak for them; they never struck me as a particularly social bunch! I didn’t want a blog to overshadow my design work, but at the same time, I felt like I had something to say and share with the world. Looking back, it’s one of the best decisions I’ve ever made. I’ve realized that sometimes you have to take chances and go with your gut, even if you’re shown otherwise.

Some favorite posts of 2007

* The 5 Secrets to Success
* How To Fight Artistâ€™s Block: 7 Methods
* Ideas: The Value of Giving (Almost) Everything Away
* Helvetica: A Love and Hate Relationship
* My New Desk Plus Workspace Tips
* Logo Design Basics
* New York: The East Village
* Successfully Selling Yourself: How To Create A Presskit
* Oahu: The Photographic Tour

For the last few days, I’ve been working on a list of concrete goals to focus on for 2008 and that can be hard! If anything, I’m still not quite sure what I want out of life, but at least now I feel like I’m on a path I like. I’m not just going to write them in my notebook this year though; as per Gala’s suggestion, I’m writing all of my goals down on a bigger sheet of paper and pinning them up somewhere I can see them every day and hopefully the reminder will help them to manifest faster. I got really lucky in 2007; for 2008, I’m not leaving anything to chance!

Plans are inert and useless, without sufficient power to translate them into action.

Thank you for your support, your recommendations, your comments, and most of all, thanks for reading! I hope your 2008 is bright and brilliant. And now, a list of thank you’s are in order for: Auntie Nubs, Lee Z, my brother, Star (for building this site!!), Mom & Dad, Kaebel, Claudia Drake, Bianca, Gala Darling, and Melisser!