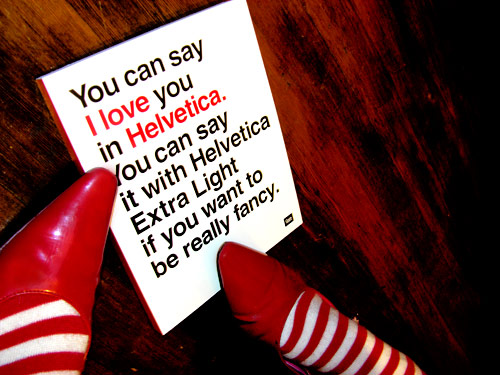 I first became aware of Helvetica when I was visiting New York during the Spring of 2002. I knew nothing about the fundamentals of typography back then (graphic design classes were four years off), but when I strolled into the F.I.T. bookstore and spotted a small red book emblazoned with a large H, my whole world changed. The book was Helvetica: Homage To A Typeface by Lars MÃ¼ller. As I flipped through the pages of Helvetica-covered images, I made the connection that the typeface was all around me (including the subway I used to get back downtown). I’ve since looked at the book so many times that the spine has cracked!

Most people seeme to have a love or hate relationship with Helvetica, as I discovered with my recent purchase of the Helvetica notebook. The “lines” on the pages are really quotes about Helvetica in 3 point type….

One of the quotes on the Love side reads:

“I always really enjoy using Helvetica because you know, some people say they use a different typeface because it gives a different feeling. I really enjoy making Helvetica speak in different ways. It’s been around for fifty years, coming up, and it’s just as fresh as it was. Obviously, it wasn’t intended to be this cool thing, but it’s just a beautiful font.” -Michael C. Place

And, on the Hate side, here’s a sample:

“Most people who use Helvetica use it because it’s umbiquitous. It’s like going to McDonald’s instead of thinking about food. Because it’s there. It’s on every street corner. So let’s eat crap because it’s on the corner. ” -Ed Spiekermann

Personally, I think Helvetica has its time and place and shouldn’t be slapped on everything just because it’s simple and easy (though I’m guilty of using way too much Hevetica Neue Ultra Light). 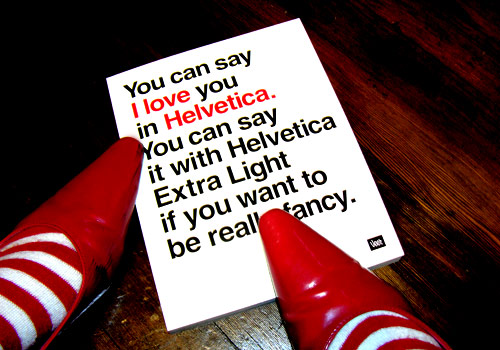 What’s your opinion on Helvetica?
Love it? Hate it?