Ideas: The Value of Giving (Almost) Everything Away

When I create work, I have a tendency to get excited and share it with the world immediately (unless it involves a client). The usual stance on ideas is that if you share them, people will ‘steal’ them and take credit. Do you really think that your idea is completely original? Or, is it based off a multitude of combined sources that you’ve interacted with? Common sense and discretion should be used, but it can be rewarding and freeing to share your visions and ideas with the world. The are a number of reasons why idea sharing is beneficial:

1. You will be forced to grow

Hoarding your ideas creates staleness. In It’s Not How Good You Are, It’s How Good You Want to Be, Paul Arden states, “If you give away everything you have, you are left with nothing. This forces you to look, be aware, to replenish.” Instead of living off your past reserves, look to the the future. It’s exciting, sometimes scary, and a completely blank slate. Are you up for the challenge?

It’s true that at some point, the pendulum of the giving you’ve done will swing back to reward you. This can be hard to believe when you’re first starting out, but as your sharing builds, so do people who admire and appreciate what you’re doing. Opportunities will begin to build. And, if what you’re sharing is genuinely valuable and unique, you will be making a difference in the world with your knowledge and visions! Self-help expert Steve Pavlina states that “Strong content is universally valued.Â  Itâ€™s hard work to create it, but in the long run it generates lots of long-term referral traffic.”

If you have a great idea, there is no reason to lock it away; it is similar to a Xerox copy. An original (yours) will always be stronger and more highly regarded than potential copies. Your idea can never be reproduced at the same level.* A copy of an original piece of art, writing, or music will always fall short and the energy can never be fully replicated, but the inspiration is what’s important. Inspiration is everywhere we look. Feel good about contributing to someone’s vision!

*Confidence plays a part in this attitude. I’m not afraid to share because if someone decides to directly copy what I’ve done in some way, I’ve probably already moved onto the next phase and they’re living on my past reserves! If you need help with achieving confidence, never fear! Gala Darling has some helpful, no fail tips here.

Remember that most musicians, writers, and artists have been influenced by the works of previous generations and by sharing their work with contemporaries, it has greatly improved. If you have an idea that you think is of value but don’t have the resources to nurture it, Sharing Ideas lets you post it for the world to see. The goal is for someone else to put it to good use.

P.S. Always remember: Being inspired by something is not the same as copying. Direct copying of any kind is bad! Take shared ideas and let them grow into a unique vision– your own! 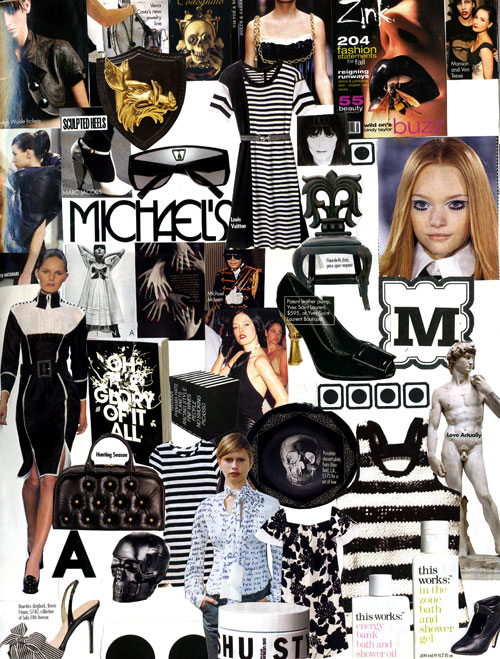 This is one of my favorite pages– stark + chock full of good inspiration!
I have a few more black and white pages in the works that are slowly but surely filling up.


Remember, you can keep tabs on Fashion Notebook Friday via Flickr.